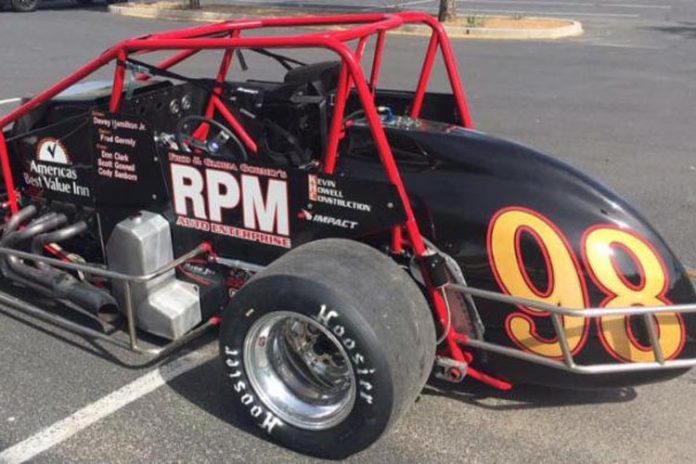 A familiar car has a new face this Friday night at Toledo Speedway as veteran driver Joe Liguori has taken over the reins of the Fred Gormly/RPM USAC Silver Crown car for the upcoming Hemelgarn Racing/Super Fitness “Rollie Beale Classic” on July 28.

The Tampa, Florida native has made four USAC Silver Crown Champ Car Series presented by TRAXXAS starts this season, all in his own No. 4, including a season-best sixth-place finish in June at Pennsylvania’s Williams Grove Speedway.

Liguori has been one of the rare breed this season, competing on both the dirt and pavement surfaces in the same car. For Toledo, however, Liguori assumes the role of the No. 98 for Gormly, a purpose-built machine for paved surfaces. The team fielded a car in 2016 for Chris Windom, who would drive the No. 98 to three wins and the series’ driver’s title.

Liguori is substituting for regular driver Davey Hamilton, Jr., who has commitments this weekend to participate in a Robby Gordon Stadium SUPER Truck Series event in Beijing, China. The Hamilton name will remain present, though, as Liguori will be teamed alongside Davey Jr’s father, 11-time Indianapolis 500 starter Davey Hamilton, who will drive Gormly’s No. 99.

Joe, the grandson of four-time USAC Sprint Car feature winner Ralph, does have previous experience in Gormly’s Champ Car. He made two starts for the team spanning two seasons, both on the dirt: a 7th at Eldora in September of 2013 and an 11th at the Indiana State Fairgrounds in May of 2014.


Liguori will be making his Toledo Silver Crown debut. However, back in 2006, Liguori did make USAC National Midget start there in Margaret Owen’s No. 28, winning his heat and finishing 16th in the feature.