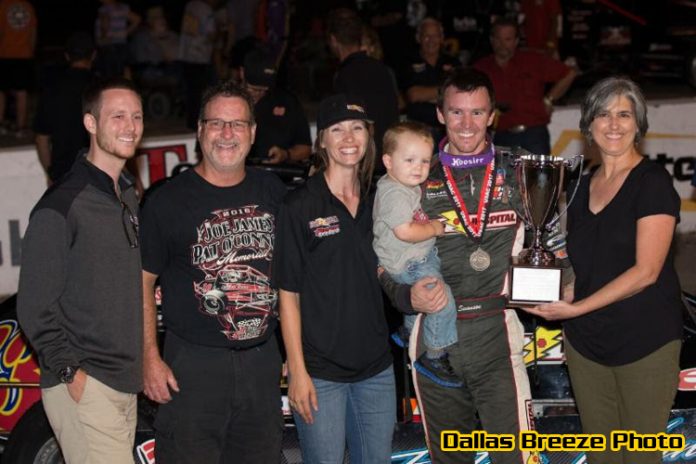 SALEM, IN – After a two-race “winless” streak, Kody Swanson admits it’s hard to say that he and the DePalma Motorsports team were struggling.

Yet, for a team so accustomed to winning over the past four seasons, the results were bound to change soon as he, chief wrench Bob Hampshire and the crew went back to the books and did their homework over the last two weeks to return to victory lane for the second consecutive year in the “Joe James/Pat O’Connor Memorial” Saturday night at Salem Speedway.

Swanson’s 18th career victory in the USAC Silver Crown Champ Car Series presented by TRAXXAS has him walking in high cotton as he moved into sole possession of second-place on the all-time series win list while his second-straight “James/O’Connor” triumph made him the fourth to accomplish the feat, joining Parnelli Jones (1960-61), Pancho Carter (1974-75-76-77) and Brian Gerster (2014-15).

To put his name on a list with those individuals and reach that kind of comfort level on Salem’s 33-degree banks was something Swanson never imagined to be in the cards when he made his first visit years ago.


“Those guys live for tracks like this to show how they great they are and were,” Swanson said. “That hadn’t always been my style. Last year, I felt I had to do my best impression of those guys to stay in the title hunt. The first time I came here, I never thought I’d get comfortable. As time’s gone on, I’ve embraced the challenge and gotten more accustomed to what it takes to run the banks.”

Swanson laid down the gauntlet in ProSource Qualifying, breaking his one-year-old track record by five-hundredths of a second and more than three-tenths faster than second-fastest. However, as was the case in last year’s event, Aaron Pierce would grab the advantage early on from Swanson.

With the spectacular sight of sparks trailing from the tails of the front-running cars lighting up the nighttime sky, the pace of the top-three was astounding with Pierce, Swanson and Chris Windom jockeying for position, separating themselves from fourth and fifth-running David Byrne and Justin Grant through the first-quarter of the 75-lap sprint.

On lap 19, Grant attempted an inside pass on Byrne for fourth between turns three and four, but lost the back end and looped it down the backing without contact. He would restart and recover to finish a solid seventh.

On the lap 24 restart, once again, Pierce was able to get away from Swanson, immediately opening up a ten-car-length lead. But it didn’t long for the two-time champ to reel him back in just seven circuits later on the 31st lap.

“I got a run up to the top of the hill right by the fence in turn three,” Swanson recalls. “I turned it down and had just enough of a run off four to outrace him into turn one. Once we got to the lead, we could control the pace a little bit, but from there, it was no easy task.”

On lap 41, Windom was all over the rear bumper of Pierce for second and the two even made slight nose-to-tail contact in turn two. After relentlessly trying to work the lower line on Pierce for several laps, Windom out-drag-raced Pierce into turn one to take second and set the forward the motion of tracking down Swanson.

“Once Chris got clear, I knew he’d be coming,” Swanson said. “Chris was strong early, he was pressing me hard and showing me a nose all the time that reminded me that if I ever screwed up, he was out of there. I knew if I slowed up at all, Chris was going by us both.”

Windom closed the gap and hounded Santos for the ensuing ten laps before he began to fade ever so slightly and Swanson continued to run consistent laps in the low 17-second range that rarely wavered a tenth or two in either direction throughout the duration, something to do that Swanson made appear relatively easy, but is certainly not.

“This place is incredibly difficult,” Swanson said. “It’s so high-banked and physically demanding just on the load and the force that you go through. With an open wheel car, you carry so much speed and you don’t have a lot of grip. That makes it hard to drive. On top of that, Salem has some character on both ends. I used to fear coming here because it was a track that made me feel uncomfortable. I always felt like I was behind. I was just trying to react. I wasn’t able to race because I was just trying to survive each lap. Running this car last year and running with these guys made It fun. Today, when I came through the gates, instead of thinking ‘oh my gosh, I’m at Salem,’ I was excited for the challenge. No one’s going to have a perfect handling racecar here, so it’s time to get up in the seat and do your job.”

A handful of lapped cars were all that Swanson needed to stream by in the final laps, and did so without much hesitation to win his third series race of the year by 1.606 seconds over Windom, Bobby Santos, Pierce and Davey Hamilton, Jr.

A 75-lapper at Salem can be physically and mentally wearing on any driver. There’s no time to breathe due to the pure speed and the closeness of the racing. Despite the obstacles, as the race went on, the more comfortable Swanson became.

“My wife spots for me. I trust her with everything,” Swanson said. When you hear the ‘clear by 3’ go up to ‘clear by 5,’ you have a little reassurance. It was tough in lapped traffic. We seemed to catch them at the wrong time and it allowed them to close. The longer the race went, the better I felt. In the last 20, we were able to click off pretty smooth and consistent laps. With bumps, it’s fun as a driver because you can always move around and you’re constantly trying to figure out, ‘can I use it better or can I dodge it better?’ As your car wears out, if you can figure it out, it will pay dividends.”