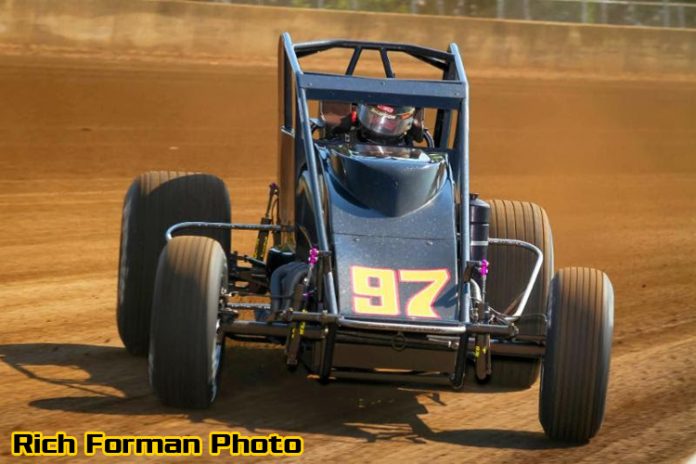 By RICHIE MURRAY
USAC Triple Crown champion Dave Darland has been tabbed as the driver of Hans Lein’s No. 97 for this Sunday, September 3rd’s “Ted Horn 100” USAC Silver Crown Champ Car Series presented by TRAXXAS event at the Du Quoin State Fairgrounds in Illinois.
Darland, a recent National Sprint Car Hall of Fame inductee, has won many of the biggest races on USAC’s calendar, but a win at Du Quoin still eludes him. The Lincoln, Indiana driver’s Du Quoin resume features nine top-5 finishes, including runner-up results in 1997, 1999 and 2008, plus a pair of pole positions in 1997 and 1999. As recently as 2014, Darland was in contention to win, leading 15 laps, before an accident sidelined him with 37 laps remaining.
Though this will be Darland’s first run in Lein’s Silver Crown car, the combination of these two goes back aways. As recently as 2013, Darland competed for Lein in six USAC National Midget events, including “Indiana Midget Week” and the “Sue Thiel Memorial” at Angell Park Speedway in Sun Prairie, Wisc.
Lein, a past competitor as a driver and owner in the midget ranks, made his debut as a Silver Crown car owner this season with driver Tyler Courtney. Courtney will be absent at Du Quoin as he competes in this weekend’s “Louie Vermiel Classic” at Calistoga (Calif.) Speedway, an event which features both AMSOIL USAC/CRA Sprint Cars and the Light Up The World Beverages USAC Western States Midgets.
Lein’s car has made one start this year two weeks ago at the Illinois State Fairgrounds in Springfield with Courtney at the wheel where they ran as high as fourth with 15 laps remaining before dropping out.
Darland, the winningest driver in the history of USAC National Sprint Car racing, ranks sixth on the USAC Silver Crown all-time win list with 14 and was the series champion in 1997. This season, the “People’s Champ” has made three starts in the series for Phillips Motorsports. He earned KSE Racing Products Hard Charger honors by racing from 20th to 7th in the season-opening “Sumar Classic” at the Terre Haute (Ind.) Action Track and earned a season-best 5th in the “Bettenhausen 100” at Springfield.
The “Ted Horn 100” begins this Sunday with pits opening at 1pm and grandstands opening at 4pm. Silver Crown practice runs from 5-6:10pm with ProSource Qualifying scheduled for 6:30pm. Pre-race ceremonies are slated for 7:30pm with the 100-mile race ready to fire at 8pm.
Advance adult tickets are $25. Advance tickets for children 11 and under are $10. On the day of the race, adult tickets are $30 and children 11 and under are $10. An adult pit pass is $35 while children 11 and under are $20.
Watch the full race a day after the event, on-demand, at http://www.Loudpedal.TV/.