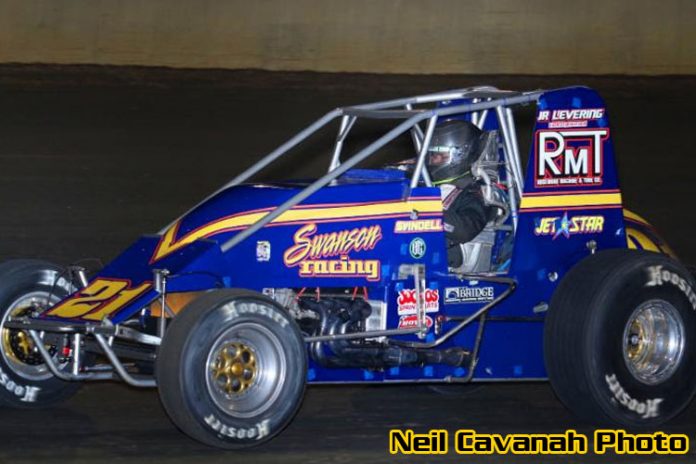 The movie Field of Dreams may have had “build it and they will come” as its signature line, but the Du Quoin State Fairgrounds may be able to modify that to “build it and they will keep coming back” as its signature line, at least when it comes to the “Ted Horn 100” USAC Silver Crown Champ Car race on the Magic Mile. There should be a number of veterans in the field Sunday, September 3 that just can’t stay away from the southern Illinois clay.

First, how about USAC Triple Crown champ Dave Darland? The Lincoln, Indiana driver has yet to find victory lane at Du Quoin. The southern Illinois mile remains the only one-mile dirt oval on the current schedule he hasn’t conquered, but it isn’t for lack of trying. Dave’s led three races for 123 laps, including 2001 when the fuel tank ran dry toward the end and he ended the race on the wall. In 19 starts, Dave has 12 top-10 finishes, three 2nd place finishes and two poles.

2008 Ted Horn 100 champ Brian Tyler made a triumphant return to the series and Du Quoin last year, flying the familiar orange and white colored number 12 of car owner Bob Galas, formerly of O’Fallon, Illinois. Galas made the colors and number famous when he wrenched Silver Crown cars owned by Chicago’s Tim Delrose and driven by the legendary Gary Bettenhausen. In fact, the combination won five times on the mile between 1980 and 1988. Tyler started 11th and finished 8th last year, completing all 100 miles. He nearly won the “Bettenhausen 100” at Springfield this year in the same car, leading before halfway then running near the top when the car suffered mechanical failure.

1990 “Horn 100” champ Jeff Swindell also made a triumphant return to Du Quoin last season. After crashing his mount heavily at Indianapolis, Swindell and team were an unknown commodity coming into the next to last race of the season. Jeff also hadn’t made a start at Du Quoin since 2010. However, Swindell picked up right where he left off, starting 4th and finishing 2nd after leading 55 miles. Jeff was a Du Quoin rookie when he sat on the pole in 1987. After a two-year absence, he won in 1990 and finished 2nd in 1993, driving cars wrenched by Bob Galas. Swindell finished 3rd at Springfield this year after starting 28th.


One returning Du Quoin veteran may stand out among the group, although he hasn’t won a Silver Crown race on one of the dirt miles. NASCAR veteran Ken Schrader of Fenton, Missouri has driven everything from sprint cars to late models, from stock cars to Indy cars. He made his Silver Crown debut in 1980, won the 1982 Silver Crown title with an assist from Sheldon Kinser before heading to NASCAR.

Du Quoin is where Schrader made his USAC Stock Car debut in 1979. Two years later, he finished 11th in his first “Ted Horn 100,” then led nine laps before finishing 3rd in 1983. Schrader last raced in the “Horn” in 1985 and tried to make the field in 1986, but the car broke and he missed the show. Ken has won in a dirt late model, four times in modified cars and three times in ARCA on the Du Quoin mile. He has 17 ARCA starts, five USAC starts and several starts in the “Oldani Memorial” modified event. Suffice to say, it’s a good bet Schrader has raced more at Du Quoin than any other dirt mile in the country. He may also set another record September 3. Last year, Tad Roach set a record for most years in between “Ted Horn 100” starts at 16. Schrader would double that record with a start Sunday!

What will Ken Schrader and the other returning veterans do September 3? Come find out! The “Ted Horn 100” begins with pits opening at 1pm and grandstands opening at 4pm. Silver Crown practice runs from 5-6:10pm with ProSource Qualifying scheduled for 6:30pm. Pre-race ceremonies are slated for 7:30pm with the 100-mile race ready to fire at 8pm.