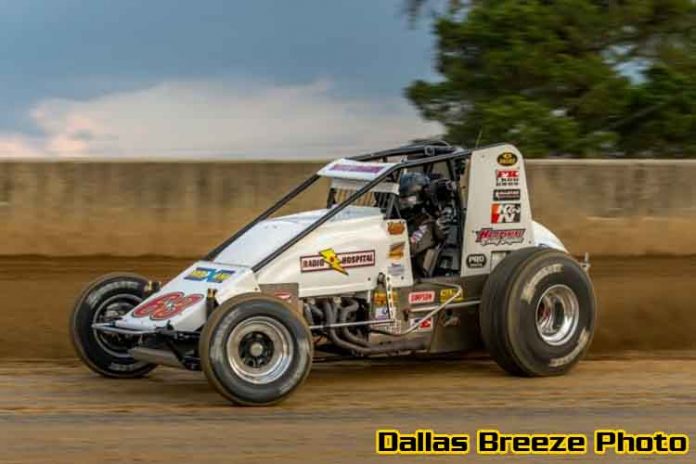 DU QUOIN, IL – Over the past eight seasons, Kody Swanson has steadily climbed the ranks to become the USAC Silver Crown Champ Car presented by TRAXXAS division’s second winningest driver. The foundation for the Kingsburg, California native’s remarkable run of success in the decade of the 2010s was laid at the Du Quoin State Fairgrounds where he notched victory number one back in 2010.

Since then, Swanson had picked up 17 additional series victories, including seven more on one-mile dirt ovals. Yet, another win at Du Quoin had eluded him until Sunday night when the two-time series champ flipped on the figurative switch in his patented style with less than ten laps remaining, passing Jeff Swindell in traffic to win his second career “Ted Horn 100” in his DePalma Motorsports/Radio Hospital – Hampshire Racing Engines/Maxim/Hampshire Chevy.

“To have a chance to win any Silver Crown race is a neat opportunity. To drive this car and win for this team is special no matter where it is. We’ve been fast here a number of times, but just couldn’t catch the breaks,” Swanson recalls. “There’s a lot that can happen that can take you out of a Silver Crown race. That’s why they’re so special when you do get them. Tonight, it was a battle. There’s so many good cars nowadays, you don’t get to rest or ride to save your tires.”

Among those good cars running up front early on was C.J. Leary who led the opening seven laps from the outside of the front row before Swanson ripped the top spot away briefly on lap eight with an inside pass coming out of turn four. Leary immediately responded by snatching the lead back away from Swanson on the outside into turn one where he would lead through the 22nd circuit.

As opposed to starting 28th such as he did at Springfield, Swindell didn’t have as much traffic to wade his way through this time around following a solid sixth-place qualifying effort. Just shy of a quarter-way through the 100-miler, Swindell rode the inner rail inside turn two past Leary to capture the lead and, by lap 30, had built up a half-straightaway cushion.

After halfway, Swanson put a charge on Leary just as Swindell did earlier, getting underneath in turn two to grab the second spot where he would remain until the final restart brought out by the slowing car of Robert Ballou in turn three, which bunched up the field and erased Swindell’s sizable advantage.

On the lap 77 restart, Swindell shot away just as he had done time-and-time again, slamming the screen door shut behind him before his followers even had a chance to react. Third-running Chris Windom did react though when Swanson stumbled in second. Windom dove inside on the front straightaway to take second and began his pursuit on Swindell for the race lead.

A repeat of last year’s epic duel between Swindell and Windom commenced, but a bid for a second consecutive Windom victory at the “Magic Mile” ended abruptly just four laps later, on lap 81, when he began to slow coming off turn four before pulling into the infield, sidelining him for the night. Swanson inherited second with 19 laps remaining, but had a half-straightaway of ground to erase to catch up with Swindell, plus the issue he encountered on the restart that he couldn’t immediately identify.

“I didn’t know if we had a bleeder stick or what,” Swanson explains. “As we were coming to green, I came over the radio and said ‘hey, you got to keep an eye out because something’s wrong.’ I don’t know what happened to the car, but it felt like it was down on the left side. I didn’t know if we had a torsion bar stop or something going funny. With us being so loose with the tire situation we had, I didn’t think we were ever going to see Windom again. I still don’t know if we would’ve if he hadn’t had that trouble.”

“After the race, I saw the left rear go flat,” Swanson added. “We were loose, way worse than we had been all race long. The longer we ran, the better we got, but we were still not the same as we had been throughout the middle of the race. I just had my fingers crossed that we wouldn’t have another caution.”

Swanson’s wish would be granted as the race would continue without a yellow, but it did force he and Swindell to maneuver through the throes of heavy lapped traffic in the final ten-lap run which was to Swanson’s advantage and Swindell’s disadvantage.

On the 91st lap, Swindell had trouble negotiating the lapped car of Aaron Pierce in turn three. As he stepped to the outside of Pierce, that opened the door for Swanson to capitalize on the bottom to snare the lead away with nine laps remaining. Swindell didn’t go away lightly as he came back a lap later to avenge his turn three defeat to no avail.

“It was tough trying to track down Jeff,” Swanson said. “Those guys were really good all day. Yeah, we run for the championship, but I want to win races. I said ‘it’s time to lay it down. I don’t know if the tires are going to last or not, but I want to try to win.’ It took everything we had to try to catch up. As we got loose, I had to keep moving, keep changing my line a little bit and try to figure how you can help your racecar. We got a little better just in time. I got a little bit of a run on him and closed enough to where if something happened, hopefully we could capitalize and we did.”

A lap later, Swanson knew if he didn’t get through the lappers in a timely manner, he could envision Swindell doing the same thing that just occurred to him. Swanson went on the aggressive heading into turn three, splitting through the middle between David Shain and Joey Moughan to escape Swindell who saw access to the opening close in a hurry.

“Lapped traffic is so tough on these miles,” Swanson said. “The way the racetrack is, as narrow as it gets, makes it hard to predict. We were able to capitalize on a moment there in lapped traffic and get to the lead. I got stuck a few laps later and was worried if I didn’t make the right decisions, Jeff would return the favor. I had to make a pretty big move down the backstretch by splitting between two lapped cars. I don’t know if that was a good idea or not, but tonight, it worked out. Maybe that was what sealed the deal.”

That move and the clearing of J.C. Bland – the final car in the pack – provided Swanson a road paved in gold toward the finish line where he finished off his fourth win of the season by five seconds over Shane Cockrum, who got by Swindell for second with four laps remaining. Swindell took third ahead of C.J. Leary and ProSource pole winner Jerry Coons, Jr.

Local favorite Shane Cockrum of Benton, Illinois, finished a season-best second in his Hardy Boys Motorsports/Financial Transportation Services – Infinity Shocks/Maxim/Claxton Chevy. Top-tier finishes have become commonplace for Cockrum at Du Quoin in recent years, but the two-time “Ted Horn 100” winner’s bid to even compete on Sunday was up in the air until recently after brake and engine issues at Springfield gave the team a major setback. The team loaned an engine from Carli Motorsports that had previously been used by Justin Grant to sit on the pole at Syracuse and Springfield in recent years and was the powerplant of choice for Tracy Hines’ final Silver Crown on the Belleville (Kans.) High Banks in 2013.

“I want to thank the Carli bunch again,” Cockrum praised. “To loan a motor out that may potentially outrun them, hats off to them. If it wouldn’t have been for them, we wouldn’t even be out here.”

Annually, there is no louder cheer for anyone than there is for Cockrum at Du Quoin as a large throng of fans certainly had something to cheer about this night with a runner-up finish.

“I go to all the miles and I don’t think there’s anybody that cheers any louder for anybody at any track than they do here for me. We’re pretty tickled,” Cockrum beamed. “I want to get half my hometown here. We’re 15 minutes away and I think we keep getting a few more every year, which is really cool.”

A number of records and milestones were on the line Sunday night if Germantown, Tennessee’s Jeff Swindell could’ve brought home his Swanson Racing/Jet Star – Rosewood Machine & Tool – Jeff Freel/Maxim/Toyota to victory lane at Du Quoin, such as he did in 1990. It’s been 24 years since his most recent series victory and he would’ve become the series’ oldest ever race winner. Yet, after borrowing a pair of shoes from Kody Swanson (that were too small for his feet), leading 68 laps and earning his third-straight podium finish with a third-place run, Swindell came up just short of getting the only record he wanted on this night: 2017 “Ted Horn 100” winner.

“We gave it away,” Swindell point blanked. “We had the dominant car the whole feature. We kept pulling away on all the restarts and my crew kept giving me the ‘wide open’ hand signals. We lost the radio about 25 laps in and, once we got to lapped traffic, I couldn’t tell where we were. I didn’t know (Kody) was that close. I tried to sneak around one of those lapped cars going into (turn) three. When I did, he slid out and about sent me out to the wall. That cost me dearly and left a hole open for Kody to come through. If I had known he was that close behind, I probably would’ve just sat behind the guy and waited. We got back around Kody on the outside there, then he split two lap cars going into three, but they closed up on me and that was the end of it. He got a good lead after that. It’s really sad because I think we definitely had the car to win.”