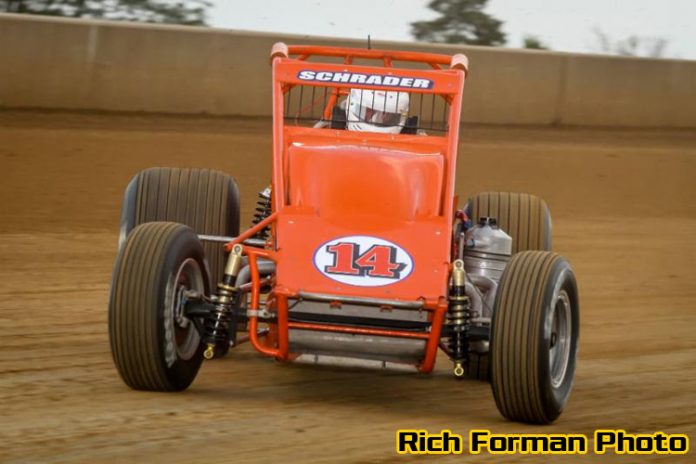 INDIANAPOLIS, IN – Eleven rookies on this year’s Hoosier Hundred entry list have the opportunity of a lifetime to learn from two legendary drivers who competed in the big cars long before many of the rookies were even born.

If the return of 1991 & 1993 race winner Jeff Swindell wasn’t enough news, the return of 1982 Silver Crown champion Ken Schrader has only added to the buzz created by the continued upward swing of USAC’s top tier series.

Swindell continues to hold the 60-mile track record set here in May of 1987 when he drove from the back of the pack to capture a spectacular race win in the “Hulman 100” and went on to turn heads that year setting a world record at Springfield and nearly winning at Du Quoin. His performance led to a full-time ride with Tim Delrose and Bob Galas in 1990 and, in 1991, they captured the first of two “Hoosier Hundred” races.

Swindell was mostly absent from the series after the 1993 season, but returned in 2006 to run at Springfield and Du Quoin for Galas. Jeff came back to Indianapolis in 2010 and 2011, and again in 2016. In 2016, he was marching toward the front when he was caught up in an accident on lap 84. Later that year, he led 55 miles at Du Quoin before finishing second and nearly won at Du Quoin last year, showing that there is still gas left in the tank of the Tennessee native.


1982 Silver Crown champ Ken Schrader made his series debut at Terre Haute, ironically, driving for Tim Delrose and Bob Galas. The 1979 USAC Stock Car Rookie of the Year and the 1983 USAC Sprint Car champ would eventually go on to become a NASCAR Rookie of the Year and a multi-time NASCAR Cup winner before scaling back to run dirt tracks and a part-time ARCA schedule. He toyed with the idea of getting back into one of the dirt champ cars back in 2016. The idea became a reality in 2017 when Springfield, Illinois car owner Dennis McQuinn offered him the seat of the familiar orange 14 and Schrader willingly accepted running both Springfield and Du Quoin.

Kenny first appeared on the Indy mile in the May 1982 “Hulman 100,” starting second and finishing third while leading 37 miles. He finished ninth in the 1982 “Hoosier Hundred,” then won the pole in 1983 and led the first nine laps before blowing an engine in front of the grandstand on lap 33. His best finish in the event came in 1984 when he started and finished seventh, his last appearance in a dirt car on the fairgrounds mile. He has since, however, won in ARCA stock cars and UMP Modifieds at the fairgrounds.

The “Hoosier Hundred” presented by TBA Oil & Warehouse begins with the pits opening at noon, grandstands opening at 3pm, practice at 5pm and racing at 7pm. The 100-mile main event is scheduled for an 8pm start.

A great deal is available for those who don’t want to miss a single lap of “The Week of Indy”. A Superticket is being sold for a savings of 25% off of the regular three-day prices. For just $60, a savings of $20, a fan will receive general admission at Terre Haute and Lucas Oil Raceway as well as a reserved seat for the “Hoosier Hundred.” To purchase a Superticket, visit https://usacracing.ticketspice.com/2018-week-of-indy or call 217-764-3200.

The “Hoosier Hundred” will be streamed LIVE on http://www.SpeedShiftTV.com/. A day later, you can watch it again, on-demand, at http://www.Loudpedal.TV/. You can also listen to all the action LIVE on the USAC app.