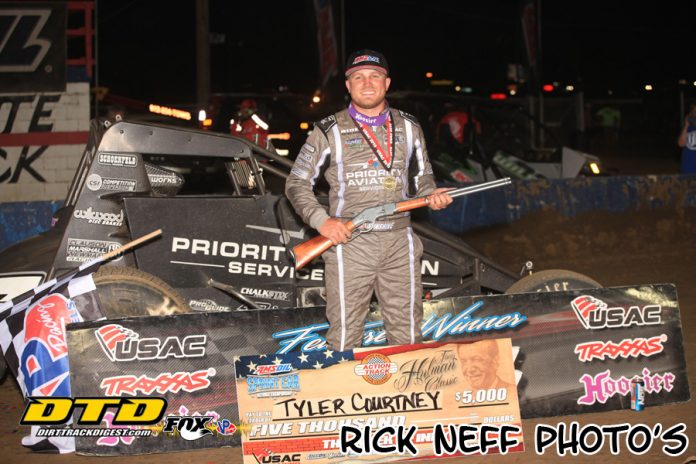 TERRE HAUTE, IN – For a racer, there’s not much better hardware you can add to your trophy collection than a “Tony Hulman Classic” rifle.

For Indianapolis, Indiana’s Courtney, it was a dream that became a reality. After setting fast time and finishing third in a Silver Crown car back in April, Courtney seems to have found the knack for being quick on the big half-mile at the Wabash Valley Fairgrounds.

“To win here at Terre Haute is unreal,” Courtney exclaimed. “It’s something I dreamed about as a kid. (Former Terre Haute Action Track promoter) Don Smith had a big impact on getting my career going, so this one ranks right up there. I’ve watched Dave (Darland) and Jerry (Coons, Jr.) and all the greats that have raced before us here and they seemed to dominate. At this race, you want to be the one taking the rifle home and we get to do it this time.”


The unique, traditional trophy awarded to the winner of the “Hulman Classic” dates to the early days of the Terre Haute Action Track. Courtney, not a hunter by trade, now gets to carry one of these pieces home with him with pride.

“The funny thing is I’m not a gun guy at all,” Courtney admitted. “Somebody was asking me if I had ever gone hunting before, but I had to tell them that I’ve actually never held a gun. It’s kind of ironic that I get to hold one tonight on the front straight at Terre Haute.”

Courtney started the 30-lapper from the outside of the front row and was able to get the jump on pole sitter Shane Cottle to grab the lead on the opening lap. His run at the front would be short-lived, however, as inside second row starter Stockon burst to the front with a turn one slider on lap two and would hold down the spot for the first two-thirds of the event.