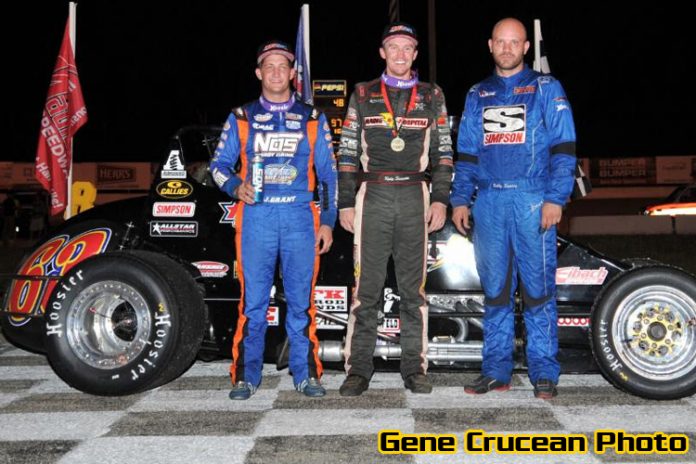 OREGON, WI – History has been a major part of his story for quite a while, but now the record books will forever reflect the fact that Kody Swanson made good on two pieces of USAC Silver Crown history in Friday night’s debut at Madison International Speedway.

Swanson won his 23rd career race to tie Jack Hewitt atop the all-time series’ victory list. Meanwhile, it was also the Kingsburg, California’s fourth-straight Silver Crown victory of the season, becoming the third driver to accomplish the feat and the first since Hewitt in 1986.

These are stats that the humble Swanson doesn’t take for granted and is quick to spread the credit around to the teams who’ve helped him along the way from the first one to number 23: Six-R Racing, the team whose car he piloted to his first back in 2010 and the ride in which Kody has become synonymous with – the DePalma Motorsports/Radio Hospital – Hampshire Racing Engines/Beast/Hampshire Chevy – that he raced to victory lane at the Bytec “Dairyland 100” for the 23rd win of his career.

“I’m just extremely grateful,” Swanson said. “There’s 23, but I’ve done zero of them alone. That’s how I feel about it. It takes a team, it takes a family and it takes support from people no one will ever see. I’ve been fortunate that 23 times those great people have carried me to victory lane. Racing’s as big of a team sport as any. It’s like a relay race and I get the baton last. This team puts in the work and deserves to win races. I take pride in being a part of that.”


Though USAC’s National Sprint and Midget divisions had made a smattering of visits over the years to the track, this was the first visit for the Silver Crown cars, putting everyone on mostly equal footing entering the gates of the half-mile paved oval.

“I put more into coming to Madison because it’s such an opportunity to have a clean slate,” Swanson explained. “No one’s got any more laps than me. No one’s got any more notes than me. You get a chance to go out and be the first one to get it done. But I was not getting it done early on. I didn’t have the car handling very good. That’s on me. These guys never quit on me. They jumped through hoops for me. We changed four springs during practice and changed another one before qualifying. We changed the left rear tire because I didn’t think we were going to be good enough.”

Despite the slight pessimism early on, Swanson sped to the lead from his outside front row starting spot, securing the lead from pole sitter Justin Grant by the time the two hit turn three on the opening lap.

Grant wasn’t content to play it conservatively and let Kody ride into the Badger State sunset. Grant remained within arm’s reach of Swanson, and on lap six, used an inside move to snare the lead away from Swanson at the stripe where he would remain for the ensuing 41 circuits.

Swanson had remained within five car lengths of Grant as the front runners began to encounter lapped traffic just prior to midway. Grant encountered the lapped car of leading series Rookie contender Travis Welpott and tried to race past him using the lower groove, but no room was vacant, and Grant’s ride got squirrelly off turn two. All the while, Swanson was steadfast up top and smoothly drove by both to capture the lead.

“I got lucky (Justin) got pinned in and I was close enough to capitalize and get alongside of him so that he couldn’t change lanes and occupy the space,” Swanson continued. “He’s someone I love racing against because he races me clean every time. At that point, you’re committed and it’s your job to see it to the end. I was fortunate to have a good handling car through the middle to keep it going on a long run.”

Once Swanson was clear of Grant, the space between grew incrementally to 1 second, to 1.5, to 2 and ultimately more than 2.5 seconds with 30 laps remaining following a lengthy 60-lap green-flag stint. The construction of the lead would meet the wrecking ball when Toni Breidinger’s machine went up in smoke with 14 laps remaining.

That put second-running Santos right on the tail tank of Swanson for the lap 92 restart. Santos was able to mount a furious challenge as he pulled alongside Swanson to the inside on the front straightaway. Swanson was able to flex enough muscle to ward off the challenge into turn one.

With four to go, Kyle Hamilton slowed to bring out the yellow and set up one last restart for a green-white-checkered finish. This time, Swanson never allowed Santos an opportunity to make a move, jetting away to lock up the lead as Santos followed single-file into one.

“I didn’t do a good enough job on the first restart,” Swanson admitted. “You’re not going to beat Bobby Santos very many times. If you give him an opportunity with five to go, you know he’s going to be there. I didn’t do a great job on that first restart. I maybe brought the pace down too slow and I spun the tires. When it stood up, I slid out, and I drove it all the way down there into turn one and plumb missed the corner. I just got lucky that he couldn’t carve it good enough to get by me, just back to me, and I had another opportunity to do a better job in turn three than I did in turn one. I surely wouldn’t make the same mistake twice, so I got in hard to make sure he couldn’t get a run, got on the brakes well to hit the bottom and do it like I was supposed to. On the second restart, I didn’t do it perfect, but I got it a little better and was able to bring it home.”

It was game, set, match as Swanson went on to stamp his place alongside and atop the USAC record books with a victory margin of seven tenths over Santos, Grant, a career-best finish for Jim Anderson in fourth and Chris Windom rounding out the top-five.