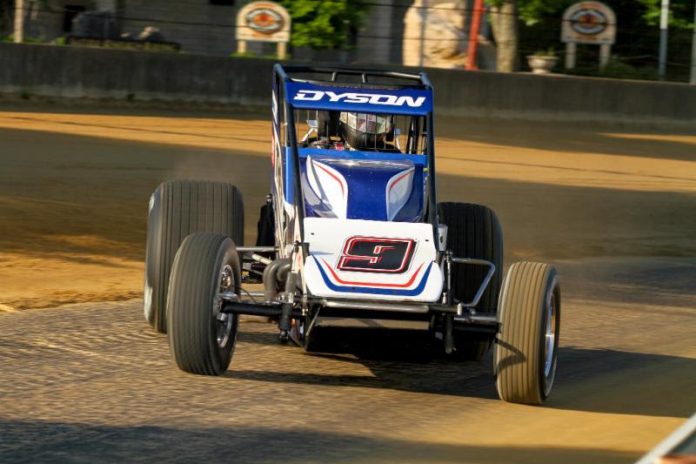 ROSSBURG, OH – Jason McDougal has been tabbed as the driver for the Chris Dyson Racing No. 9 when the USAC Silver Crown Champ Car Series arrives at Eldora Speedway September 21-22 for the 37th running of the “4-Crown Nationals” presented by NKT.TV.

Dyson, a two-time American LeMans Series champ, has been a frequent competitor with USAC in 2018, serving a dual role as both a car owner and driver. In June, his USAC AMSOIL National Sprint Car won the “Eastern Storm” finale at New York’s Weedsport Speedway. He’s also made three Silver Crown starts as a driver, finishing 13th at both Springfield and Du Quoin.

However, Dyson has a conflict that will not allow him to be behind the wheel of his Silver Crown car as a driver, instead competing in a Trans Am race at Virginia International Raceway where he is competing for a series title.

So, in came the call as to who to put in the seat for Eldora.

“(Crew Chief) Sean Michael and I were thinking about who we could put in the car,” Dyson recalled. “We reached out to Kevin Thomas, Jr., who drove our midget at the Chili Bowl this year, and he suggested that we take a look at Jason McDougal. Sean and I happened to be out at Pevely the night before our Silver Crown race at Du Quoin. We met with Jason and visited him, then went up to the stands and watched him win his heat race from fifth on the grid, then he went out and won the feature. I thought that was a pretty solid audition!”

Broken Arrow, Oklahoma’s McDougal was victorious in just eighth start on that September 1 race, proving he is a quick study in his first year in sprint cars.

His only experience with Silver Crown cars came as the spotter for Kevin Thomas, Jr. a month ago at the Springfield Mile, finishing second. Now comes another big test as McDougal jumps behind the wheel of a Silver Crown for the first time ever.

“I’ve actually never been to Eldora before,” McDougal admitted. “I’m pretty pumped to go there in general. I’d never been to a Crown race until this year and they’re pretty awesome. It’s a long race and you’ve got a long time, but I’ve got some patience. And I think I’ll be pretty good at conserving my tires.”

McDougal hits the Eldora half-mile for the first time on Friday, September 21, when the Silver Crown cars lead off the USAC portion of the event with practice and single car qualifying along with complete shows for the World of Outlaws Craftsman Sprint Cars and the Eldora Stock Cars.

Friday’s event will begin at 6pm with World of Outlaws practice and qualifying, Silver Crown practice, stock car hot laps, followed by Silver Crown qualifying, all preceding the opening ceremonies and the remainder of the night’s racing activities.

On Saturday, September 22, the Silver Crown teams will again have a practice session, leading into their 50-lap finale as part of the event which will feature complete events for the USAC P1 Insurance National Midgets, USAC AMSOIL National Sprint Cars and the Arctic Cat All Star Circuit of Champions.