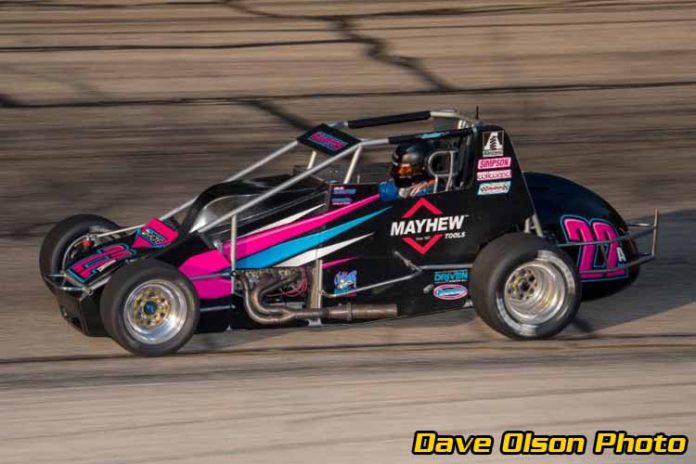 SPEEDWAY, IN – Though it’s been 15 years since the USAC Silver Crown Champ Cars last appeared at Memphis International Raceway, this weekend’s March 22-23 “Memphis 100” driver lineup brings with it a load of talent, four of which have previous experience at the ¾-mile D-shaped paved circuit – Eric Gordon, Aaron Pierce, Bill Rose and Bobby Santos.

Gordon, of Fortville, Ind., who will tackle Memphis this weekend in the Armstrong Racing No. 78, has made three Memphis Silver Crown starts and is the most accomplished driver at the track among the returning drivers. The first of Gordon’s starts came in the inaugural edition in 1998 aboard Gary Irvin’s No. 48, a seventh-place run. He followed up with a 26th in 2000 and a fifth in 2004 with Dynamics, Inc.

His current car owner, Brad Armstrong, competed as a driver in the first event in 1998, finishing 13th and rounded that out with a 30th in 2004.

Muncie, Indiana’s Aaron Pierce will be back in his familiar own No. 26, which he drove in 2004, finishing 29th falling victim to a head gasket issue. Likewise, Bobby Santos of Franklin, Massachusetts made his lone Memphis appearance that same year, dropping out with an oil leak after 56 laps, finishing 19th. Plainfield, Indiana’s Bill Rose ran into engine problems during his 19th place result in 1999.


Similar to Armstrong, Davey Hamilton made a pair of Memphis starts as a driver and now serves in the role of car owner, where he will field both Kevin Thomas, Jr. and Jason Conn in this weekend’s “Memphis 100.” Hamilton appeared in the first two Memphis Crown races in 1998-99, racing to back-to-back top-tens – a 6th in 1998 and a 10th in 1999, both for George Snider/A.J. Foyt Racing.

On the owner side, Bob East-built Beast chassis have won all four Memphis races with Dave Steele (1998 & 2004), Brad Noffsinger (1999) and Brian Tyler (2000). As a car owner, he won the 2004 race. The USAC Hall of Famer now works with the Klatt Enterprises team and driver Kyle Hamilton. Klatt themselves, competed in 2004, finishing a strong third with driver Bobby East.

Nolen Racing will have four-time series champ Kody Swanson in the seat this weekend and throughout the entire season. Nolen has fielded a car in each of the previous four Memphis races with a 16th by Billy Puterbaugh, Jr. in 1998, as well as twice with Tony Elliott – a 13th in 1999, a 30th in 2000 and a DNQ in 2004.

Gene Kazmark ran Mike Ordway in 1999, missing the transfer spot in the qualifying race to compete in that afternoon’s 100-lapper. The Illinois-based team will be looking to make their Memphis visit a little sweeter this time with driver Jim Anderson from Joliet, Illinois. Bob Hoerner, who works with the team at the shop, fielded his own cars in three Memphis starts. In 1999, Steele started second for Hoerner and led 44 laps before the engine expired, finishing 25th. Jimmy Sills ran the car in 2000, finishing 17th. In 2004, Dave Darland finished 21st.

With all that said, how much does experience matter when it comes to Silver Crown racing at Memphis? As in most places, the cream usually rises to the top when all is said and done, once a few laps are under the belt. All drivers were on similar footing in the first race in 1998. When the field returned in 1999, two Memphis first-timers collected the top-two spots in Noffsinger and Kenny Irwin, Jr.

Drivers like Kody Swanson, Chris Windom, David Byrne, Justin Grant, Kyle Hamilton, C.J. Leary have yet to compete at Memphis, all of who have extensive experience in Silver Crown cars on pavement. That group, plus the Memphis veterans and the new crop set the stage for what will be a talented field, most of which are capable of winning anywhere, any day. Even at Memphis, this Saturday.

On-track action at Memphis International Raceway gets underway on Friday, March 22, with pits opening at 10am Central, leading into a practice which begins at noon.