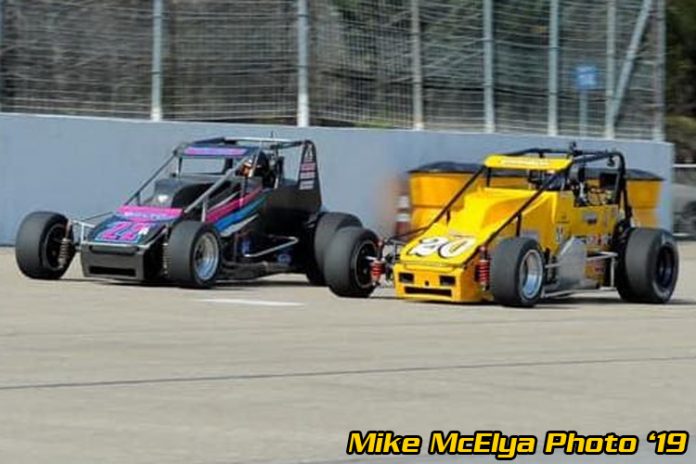 MILLINGTON, TN – It takes a master of a craft for an individual to adapt to anything thrown at them.

Kody Swanson has encountered countless tests throughout the offseason – in the weeks leading up to the first race and on both days of race weekend – yet he managed to ace them all, culminating in Saturday’s “Memphis 100” USAC Silver Crown Champ Car Series victory at Memphis International Raceway.

At the conclusion of 2018, Swanson migrated to Nolen Racing after the closure of DePalma Motorsports with whom he won four of the previous five Silver Crown championships. The team thrashed through the offseason to get their machines ready for the opener and had the foresight and the want-to to have two cars ready to go for Memphis. As it turned out, they would need their full arsenal.

During Friday’s practice, Swanson practiced both of Nolen’s cars. They had their primary car pulled apart on pit lane during the session after a brand-new driveshaft dealt them trouble. Meanwhile, the team pulled out their backup and Swanson put some laps on it to make sure it was ready to run. Swanson jumped back into the primary with a new driveshaft and proceeded to set the fastest lap of the afternoon.


Fast forward to raceday on Saturday, Swanson took to practice back in the primary before encountering what he described as a fluke engine part issue. Nolen once again had to roll the backup car out where they tweaked on the chassis to get it to where Kody felt it was at its best. Enter qualifying and Swanson put it on the pole position.

Easy as clockwork, right? Of course not, but with Swanson as part of the operation, he almost makes it seem that way on the regular.

“I’m exhausted; I’m elated; I don’t even know what to feel,” Swanson exclaimed. “I’m very grateful. I haven’t been to my day job since Tuesday. I could see the writing on the wall that we were already in a corner then. We had guys that were there into the wee hours of the morning with me almost every night this week, then back at it the next day, just digging for all we were worth to be ready. We got one ready and dug deep enough to get the other one ready just in case,” Swanson explained. You hate to think you’d ever have a failure and need it, but we did, and it was ready to come in off the bench and do a great job for us.”

Swanson led the first five circuits from the pole position of the 100-lapper before David Byrne corralled Swanson and used an outside turn one pass to clear him for the point. Eric Gordon capitalized and was able to grab second from Swanson just moments later on the back straightaway. By lap eight, Swanson was fourth as hard-charging Aaron Pierce slipped by as well.

Matt Goodnight was the lone wall contact of the weekend, pounding the SAFER barrier between turns three and four on lap 10 to bring out a lengthy yellow, that ultimately resulted in a red flag for the cleanup. He climbed from the car and walked away under his own power. Fifth-running Kyle Hamilton also stopped during the incident and was relegated to the tail.

When racing resumed, Pierce was a man on a mission, sweeping by Gordon for second on the 25th lap and, one lap later, ripping by Byrne on the inside of turn three to snare the top spot.

Pierce had constructed a one-and-a-half second lead until lap 36 when he fell to the wayside with a driveline issue, putting him on the sidelines for the remainder of the afternoon. That put two familiar foes, Swanson and Bobby Santos, at the front running one-two.

One lap following a restart, Santos made his move on Swanson, swiping the lead with an inside turn one pass just before the halfway mark, ultimately building a one-and-a-half second lead. Coming into Memphis, Santos had won the series’ pavement opener in two-straight years and Swanson admitted tracking down Santos in a pavement Silver Crown car was no easy feat, but his faith and confidence never wavered.

“I did my homework enough to know that Memphis eats tires and that you need to be there at the end,” Swanson explained. “I was glad to be in a good spot early and get the lead, but Bobby was coming strong through the middle. I didn’t know if once he got the lead, we’d see him again. I felt like we kind of stabilized there and got a couple restarts and got a chance to just start over.”

That chance seemingly arrived on the lap 71 restart when Swanson tracked Santos’ path and shot to the lead on the inside off turn two. However, back in the pack, the machines of Travis Welpott (backstretch) and Austin Nemire (turn two) came to a stop to bring out the yellow, thus negating Swanson’s race-leading move.

With oil dry on the low line between turns one and two, Swanson had to alter his line entering and exiting the second turn as he went to work on Santos on the lap 79 restart. It didn’t take long for the fruits of Swanson’s labor to pay dividends as Swanson was able to occupy the low line into turn three to overtake Santos for good.

Swanson still had to work his way through traffic down the stretch, weaving his way through as Santos kept a close watch. Coming to the white flag, the cars of Chris Dyson and Byrne ran side-by-side into turn one. Swanson looked for an escape and had to whoa up his ride, getting him a tad squirrely on entry, but recovered to drive around the outside of Dyson midway down the back straight and enter clear waters to win his 25th career USAC Silver Crown event.

Behind Swanson were a series of fascinating perseverance stories of their own. Santos finished second after starting 21st on the grid due to having a push start on the initial start. Grant was third after charging from 20th following a right rear tire change prior to the start. Hamilton earned a career-best fourth after restarting from the tail following Goodnight’s early-race incident. Rookie Joey Schmidt took fifth in his very first Silver Crown start.

Yet, at the front, it was Swanson once again, who admitted he hadn’t even been able to go to the gym lately because he had been at the shop so much. After burning the midnight (and beyond) oil night-after-night, and through the trials and tribulations, the Kingsburg, Calif. native once again prevailed, and takes off in 2019 right from where he left off with a group as dedicated as he is to the craft.

“If I’ve learned anything over the last five years, it’s that the effort put in by the people you work with can make all the difference. This Nolen bunch, so many people have stepped up and really tried to put their best foot forward and give it all we had.”