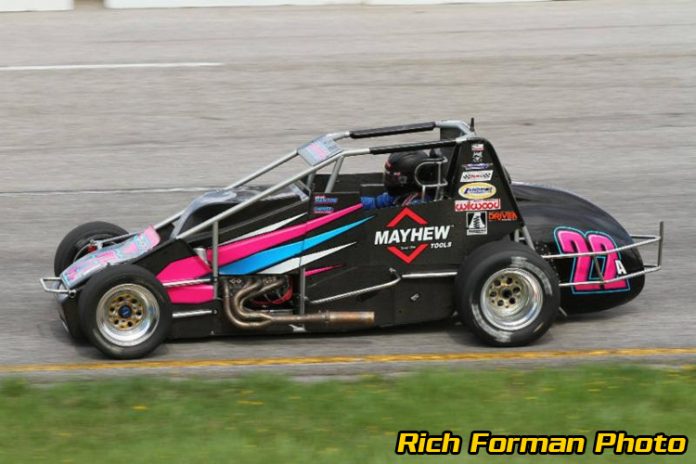 TOLEDO, OH – The bulk of the field for this Saturday’s Hemelgarn Racing/Super Fitness “Rollie Beale Classic” is an experienced bunch when it comes to USAC Silver Crown competition at Toledo Speedway.

Sixteen of the 26 expected entries have previous Silver Crown starts at the half-mile, high-banked oval and own four wins in the six-race history of the event.

Bobby Santos has been incomparable at Toledo, becoming the first and only driver to win in all three current USAC National divisions at Toledo, capturing an AMSOIL National Sprint Car win there in 2006, a NOS Energy Drink National Midget feature in 2009 and completing the trifecta with a Silver Crown victory during the 2017 season. The Franklin, Mass. native also finished 3rd in the Rollie Beale Classic in 2012 and in the runner-up spot in 2018.

Kody Swanson of Kingsburg, Calif. is the only driver to start all six Silver Crown races at Toledo and, get this, he’s won three times, finished 2nd twice and took home a 4th in 2012. Additionally, he’s started from the pole on three of those occasions and holds the one-lap Silver Crown track record of 14.809 set in 2011.

David Byrne and Kyle Hamilton are among the most experienced drivers in the lineup. Byrne, of Shullsburg, Wisc., finished a career-best 3rd at Toledo a year ago and arrives with three-straight top-eight finishes at the track. Danville, Indiana’s Kyle Hamilton has been bitten by the bad luck bug in recent starts at Toledo, but he did score an 8th in 2011 and a 6th in 2012 during his first two appearances in 2011 and 2012, respectively.

Eric Gordon and Aaron Pierce have miles and miles of experience at Toledo in a variety of cars and both have each made three starts in the “Big Cars” at Toledo. Gordon, of Fortville, Ind., won his very first USAC National Sprint Car feature here in 1989. He came back last season to Silver Crown competition after a six-year layoff and showed no rust, finishing 4th, one spot ahead of Pierce who grabbed his second career top-five finish in a Silver Crown car at Toledo, equaling his 5th from his first run in 2015.

A handful of drivers are expected to make their second Silver Crown visit to Toledo. Hillsborough, California’s Annie Breidinger hasn’t been in a Crown car in nearly two years. She returns to where she earned her best career result with the series, a 9th in 2017. Two-time dirt Silver Crown winner C.J. Leary of Greenfield, Ind. is back on the pavement this year for the first time in four years, finishing 11th in 2015. Cody Gerhardt of Fresno, Calif. finished a solid 7th in his Toledo debut last year, just ahead of fellow first-timers Kyle Robbins of New Castle, Ind. (11th) and Pendleton, Indiana’s Travis Welpott (9th).