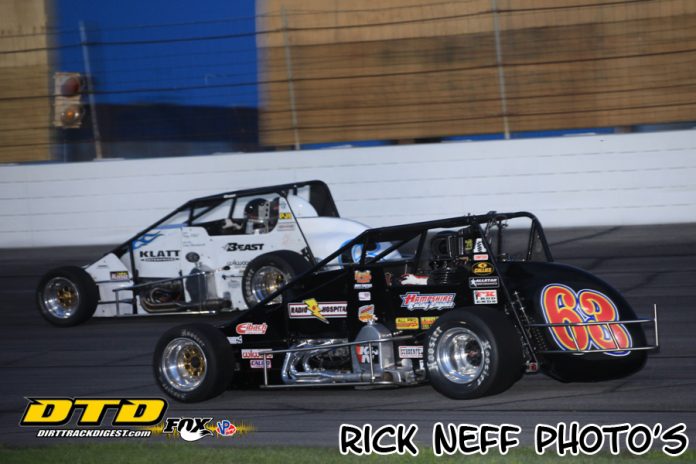 BROWNSBURG, IN – Six past USAC Silver Crown winners at Lucas Oil Raceway are ready to roll this Friday, May 24, in the “Dave Steele Carb Night Classic” at the .686-mile paved oval in Brownsburg, Ind.

Those six drivers make up a total of 15 Silver Crown wins at LOR, led by Tanner Swanson of Kingsburg, Calif. who owns five victories between 2013 and 2016, including the May race in three-straight years between 2014 and 2016. With another victory, he would break a tie with Mike Bliss as the winningest driver in the history of the series at LOR.

Older brother Kody, of Kingsburg, Calif., has four Silver Crown wins at LOR in 2011, 2016-18, including the last two May races there. His team, Nolen Racing, has won twice themselves at LOR, in 1991 with Johnny Parsons and in 1995 with Jim Keeker. They’ve won the first two, both on pavement, to open the season at Memphis and Toledo and carry the series point lead with them into Friday at LOR.

Shullsburg, Wisconsin’s David Byrne and Peru, Indiana’s Russ Gamester have notched Silver Crown wins at LOR. Byrne’s came on a last lap, last corner pass back in 2014 while Gamester, the 1989 USAC National Midget champ, rocketed to victory on a Sunday afternoon at what was then known as IRP during the Summer of 2000.

While not a Silver Crown winner at LOR, although he does own one series win at Milwaukee in 1990, Fortville, Indiana’s Eric Gordon has won on three occasions at LOR, all in USAC Sprint Car competition, in 1990-91-92.

Past USAC Silver Crown winners C.J. Leary (Greenfield, Ind.) and Justin Grant (Ione, Calif.) have gotten it done on the dirt, but are seeking their first series wins on the pavement. Aaron Pierce (Muncie, Ind.) has won three times on pavement tracks with the series at Chicagoland, Kansas and Darlington, but not yet at LOR where he finished third in May one year ago.

Three drivers are in the category of USAC Sprint and Midget winners who are looking to tally their first career Silver Crown victories: Kevin Thomas, Jr. of Cullman, Ala., Kyle Hamilton of Danville, Ind. and Brian Gerster of Fishers, Ind.

A solid core of veterans are mixed with a nice Rookie crop, with veterans Austin Nemire of Sylvania, Ohio, Kyle Robbins of New Castle, Ind., Mike Haggenbottom of Levittown, Pa., Matt Goodnight of Winchester, Ind. and Terry James of St. Louis, Mo. returning to the lineup. They are joined by a group of Silver Crown Rookies consisting of Chris Dyson of Pleasant Valley, N.Y., Joey Schmidt of Ellisville, Miss., Derek Bischak of Angola, Ind., Cody Gerhardt of Fresno, Calif. and Cody Gallogly of Pataskala, Ohio.

The “Come from the Back Challenge” is back again this year, providing a driver the option on whether they would prefer to start in their qualified position or start from the tail with a chance to take home a $10,000 bonus courtesy of Legacy Motorsports and Gatekeeper Services.

In fact, the challenge is just one of several contingency bonuses added exclusively for the event. $19,000 in lap money has been added by a number of sponsors, a fitting number as Steele won numerous races in Bob Gratton-owned No. 19 Sprint Cars and Silver Crown cars during his career. Additionally, the fastest qualifier will earn a $1,000 bonus from Mac and Carol Steele. Carl Edwards has added $1,000 in hard charger money for the driver advancing the most positions from his or her starting spot during the night’s 100-lap main event (“Come from the Back Challenge” taker is excluded). Finally, Steele Performance Parts is paying for all Silver Crown driver pit passes.

Tickets are $25 for adult general admission and $10 for children 11 and under. Pit passes are $30 for members and $35 for non-members.

Watch the race live and on-demand at http://www.FloRacing.com/. Listen live on the USAC app. Follow along with live updates on https://www.facebook.com/usacracing/ and https://twitter.com/USACNation, plus live timing and scoring on the Race Monitor app.