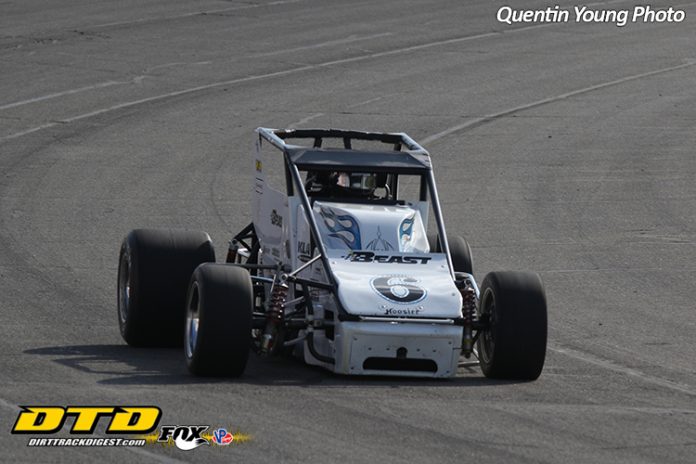 BROWNSBURG, IN – One year ago, it was a May to forget for Kyle Hamilton. It seemed as if everywhere he turned, bad luck was staring back at him square in the eyes.

One year later, the May tide has turned in his favor. After putting his car on the front row for the “Little 500” the day before, Hamilton followed up on Friday night with his first career USAC Silver Crown Champ Car Series victory in the Dave Steele “Carb Night Classic” at Lucas Oil Raceway, pocketing a cool $14,750 for his efforts.

“Last year, it didn’t seem like anything could go right mechanically,” Hamilton recalled. “Our ‘Little 500’ car broke, my teammate Brady (Bacon)’s dirt car broke, we broke right out the box here at (LOR) and had to start the race from the tail with no practice laps. This year, we’re on the front row of the ‘Little 500’ and we qualified third tonight at LOR. I thought, ‘well, this is going a lot better.’ But, honestly, tonight was the night I was a little bit more worried about being slow. We’ve always struggled here, and I didn’t want to disappoint my team, but I was a little nervous inside.

“I grew up about 15 minutes from here and I’d always tell my buddies that we’re racing at LOR,” Hamilton continued. “But I kind of hesitated because I was always so bad here. To say we pulled one off in a Silver Crown car on a big night is pretty cool to me.”
Truth is, the tide had turned for Hamilton before the month of May, overcoming circumstances that could’ve thwarted quality runs to finish fourth at Memphis and sixth at Toledo. On Friday, the Danville, Ind. driver put his Klatt Enterprises/Beast Chassis – Wilwood Disc Brakes/Beast/Ford on the outside of the front row for the 100-lapper at the .686-mile paved oval.

Meanwhile, up front was Kody Swanson who started from the pole after taking the Fatheadz Eyewear Fast Qualifier Award and $1,000 bonus from Mac and Carol Steele. Kody dominated the first half as he attempted to go three-for-three in pavement races on the season and extend his series-record of consecutive pavement Silver Crown wins to seven.

Four-time LOR Silver Crown winner Bobby Santos charged past Hamilton on the ninth lap with an inside turn one pass to move to second. From there, Santos began to reel in Kody and applied pressure for the lead as those two separated from Hamilton in third.

One of the major storylines developing throughout the race was Tanner Swanson’s decision to accept the “Come from the Back Challenge” during driver introductions. By doing so, he forfeited his outside front row spot to start from the tail and go for a $10,000 bonus by way of Legacy Motorsports and Gatekeeper Services. By lap 13, Tanner was already in the top-ten, and by lap 30, had entered the top-five, reminiscent of his 22nd to 2nd charge through the field one year prior.

On the 33rd lap, Hamilton caught up to Santos, driving to the inside of Santos in turn one and going wheel-to-wheel, toe-to-toe before prevailing off turn two with the second spot, but trailing Kody in the lead by over a second.

Kody and Hamilton weaved their way through lapped traffic, Hamilton mimicking every Swanson move and not allowing the four-time Silver Crown champ to slip away just as Matt Goodnight stopped on the back straight away to bring out the caution just one lap short of halfway. Under yellow, fifth-running Tanner Swanson pitted to let air out of his left rear tire, to which he later admitted to using up too much of his tires early on.

With the yellow, that cleared the traffic situation for the time-being, although, for Hamilton in second, he couldn’t have imagined what occurred next when Kody failed to take off on the lap 54 restart, handing over the lead to Hamilton with a clear track ahead of him. Kody coasted around to the pit area with an apparent engine issue that put an end to the four-time LOR Silver Crown winner’s bid for five.

Hamilton continued to build his lead up through lap 63 when the caution came out for Chris Windom, who’s nightmarish 24 hours came to an end crumpled against the turn one wall after smoke poured from the back of the car entering one. Derek Bischak was also caught up in the incident, riding over Windom’s front end, putting an end to the evening for both drivers.

Windom rode out a hellacious flip during the “Hoosier Hundred” at the Indiana State Fairgrounds Thursday night, and rode out a frightening Indy Lights wreck on Carb Day at the Indianapolis Motor Speedway Friday afternoon before smacking the turn one wall at LOR. He walked away once again uninjured.

On the lap 73 restart, Santos used a run on the inside of Hamilton, sliding up in front of Hamilton in turn one to secure the position as the pair exited turn two. One lap later, the roles were reversed, and Hamilton drove it hard into turn one underneath Santos to slot into the top spot.

Hamilton chalks up momentarily losing the lead to inexperience in this situation, making it doubly-tough with a driver like Santos making you pay. But Hamilton knew he had something and drove back by to reclaim the position.

“Honestly, I don’t have a ton of experience leading Silver Crown races,” Hamilton admitted. “I didn’t know how aggressive to be on the restart. I’d say Santos is one of the more aggressive guys and one of the best who does it. He sent it on down there and it stuck. Immediately, once I got behind him, I could tell I was really digging better than him coming off the corners. I had to throw another haymaker at him going into one and it stuck again.”

Incredibly, Hamilton proceeded to reel off his best four laps of the race on laps 74-75-76-77. But on the move was Tanner who ripped around the outside of Santos in turn two on the 76th lap. Tanner began to chip into Hamilton’s lead, cutting the interval down to less than a second as the two began to work lapped traffic with less than 20 laps remaining.

Hamilton’s spotter was brother and fellow racer Nick Hamilton who played it coy when speaking to Kyle over the radio, only giving him the basics and keeping Kyle focused on running his own race.

“I think he was trying to play it conservatively on the radio because I was running some good times,” Hamilton said. “He just kept telling me how many laps were left, but he didn’t say if there was any pressure from behind. So, I kept the hammer down. When we got to lapped traffic, I kind of figured when I looked up at the board that Tanner was going to be trying to make a run of some sort. He’s one of the best here. Nick never said how many car lengths back he was. But I think if he would’ve told me, I would’ve started to miss my marks.”

Hamilton dipped under the lappers down the stretch as Tanner tried everything he could to keep up the pace, but Hamilton’s car seemed to get better and better in the final laps, stretching out to a comfortable advantage that proved to be a tall and impossible task for his closest competition.

“As the laps went on, the car kept getting better and better,” Hamilton explained. “I have to give hats off to Bob East. He sure knows how to set up a car to get around here. We just kept working at it and working at it. It really wasn’t as much the setup as it was Bob’s coaching. He just kept telling me to keep my momentum up and explained to me how LOR is such a momentum track. We were able to roll the center a lot better than we’d ever have here.”

Hamilton closed out his winning performance with a victory margin of 4.186 over Tanner Swanson, Santos, Justin Grant and Eric Gordon, who picked up an extra $1,000 from Carl Edwards for his hard-charging performance from 16th to 5th.

With the win, Hamilton became the first “first-time” winner of a pavement USAC Silver Crown race since David Byrne at LOR in 2014. This win was special in a number of ways, though, for Hamilton, a local kid who grew up watching and idolizing Dave Steele perform his racing heroics at LOR, and now joins him as a Silver Crown winner at the very same track.

“I watched Dave Steele run here a lot growing up,” Hamilton remembered. “I raced over at the (Indiana State) Fairgrounds at Mini Indy when I was a kid and every night that the midgets, sprint cars or silver crown cars were at (LOR), we’d come out and watch. It seemed like Steele was either going for the win, challenging for the win or winning several of the races. He was one of my heroes I looked up to as a ‘pavement only’ driver.”