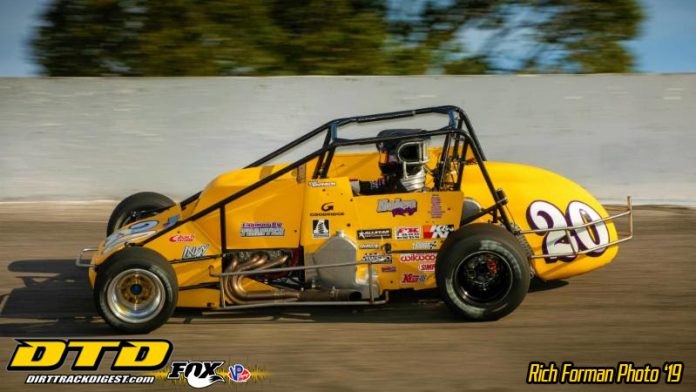 SALEM, IN – Time and time again, it seems that whenever Kody Swanson comes face-to-face with adversity, it’s a near guarantee that adversity has no fighting chance.

Twas the case Saturday night in round seven of the USAC Silver Crown Champ Car Series season at Salem Speedway where the Kingsburg, Calif. native had to jump into his backup car early after engine issues befell his primary Nolen Racing ride during practice. Swanson jumped into the secondary car, promptly put it on the pole and led wire-to-wire to capture his fourth consecutive Joe James/Pat O’Connor Memorial victory, equaling a feat previously only accomplished by Pancho Carter in 1974-75-76-77.

In fact, it’s the second time this year Swanson was thrust into this scenario. He encountered mechanical trouble with the primary in the opener at Memphis before sitting on the pole and winning the main event.

It’s not an easy scenario for any individual to overcome, but Swanson just makes it appear easy. The reality is, without the amount of preparation they put into it, their night could’ve been toast before it even began. Instead, Swanson and Nolen get to once again enjoy the spoils of victory for the fourth time in seven races in 2019.


“Obviously, it was not part of the plan,” Swanson admitted. “We practiced with the primary car, I picked out my best shocks and springs and did all the homework I could on that one and was really happy with where we were for running on used tires.”

Right before the second round of practice started, crew member Chris Phillips noticed that water was coming through one of the nozzle filters. Engine builder Bill Tranter noticed it was a big issue as well, and Swanson was forced to hop out of the primary while the team quickly retrieved the backup car. Crew members Rick Laughlin and Dale Latty had worked on the backup car leading up to the event to make sure it was ready just in case it was needed.

In a matter of minutes, the backup car went from having travel tires on it to race tires that could be scuffed for qualifying. The time that was left only allowed for two laps of practice, which proved pivotal for Swanson to diagnose what needed to be done.

“In those two laps, I was able to find the things I didn’t like about the racecar and what made me uncomfortable from the cockpit,” Swanson explained. “Immediately, we came in and there was no ‘hey, we’re tired. You figure it out.’ They all jumped in and continued to just battle it out to make it better.”

Swanson described his qualifying run as an uncomfortable two laps. Yet, it was good enough for the four-time series champ to win the pole by more than three tenths of a second. Despite all that, Swanson had the hunger for more.

“After we qualified, I came in and wanted to change four shocks and four springs,” Swanson recalled. “Not once did any of the guys give me any grief, like ‘hey, don’t be greedy.’ They just kept after it.”

Swanson edged ahead at the start of the 75-lap race with outside front row starter Bobby Santos delivering a challenge to the right rear hip pocket of Swanson exiting the second turn, which would develop into a five car breakaway led by Swanson, followed by Santos, David Byrne, Aaron Pierce and Kyle Hamilton in the opening five laps.

Austin Nemire slowed to bring out the first yellow flag on lap 8, pouring smoke and then fluid on the surface to force an early conclusion to his night.

On the lap 14 restart, Byrne used a big run on the front straightaway to slip underneath Santos for second, then began to hustle to present a challenge toward Swanson. By lap 20, however, Swanson had broken away from Byrne to nearly a second as Byrne fronted a conga line ahead of Santos, Pierce and Hamilton.

Following a yellow flag for 2016 series champ Chris Windom who slowed before pulling into the pits and climbing out on lap 32, Swanson was stopped by race officials to see if he was leaking fluid. Everything checked out in order and Swanson resumed his race from the head of the pack.

Once racing returned to green, Swanson went into full decimation mode, opening up a half-straightaway lead by lap 40 and then a full-straightaway advantage by lap 50. As Swanson entered the clear, he was cruising as much as one possibly car at a place like Salem with its daunting 33-degree banking.

Behind him, though, a tight scramble for position ensued, allowing Swanson to open up the interval even more as second-running Byrne encountered the lapped car of Mike Haggenbottom. Byrne drifted high in turn two on lap 55, allowing Santos to rip by underneath to return to second. Hamilton slid up in front of Byrne in turn one three laps later for third while Pierce followed suit on the next lap in turn one by Byrne for fourth.

With ten laps remaining and tussling in traffic, Hamilton got hung up behind a lapped car, forcing him high at the exit of turn four, which Pierce took full advantage of, diving to the inside of Hamilton to take third.

With six laps remaining, five-time Indianapolis 500 starter James Davison tagged the turn four wall, slowing briefly to bring out the final caution period of the night. He continued on to finish an impressive ninth in his USAC Silver Crown debut.