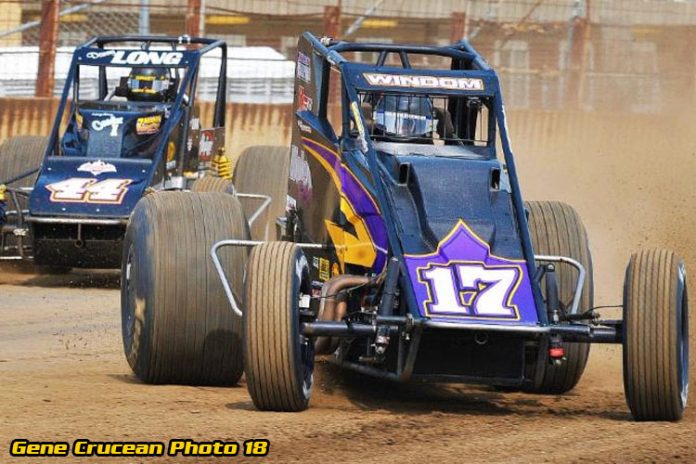 SPRINGFIELD, IL – The ups and downs involved in auto racing are undeniable. Defending Bettenhausen 100 winner Chris Windom has certainly had his share of obstacles this season as he prepares for this Saturday’s 58th running of the “Bettenhausen 100” at the Illinois State Fairgrounds in Springfield.

Last Saturday at Salem Speedway, Windom’s right rear shock broke in half while running 8th, putting another damper on a season that sees him 11th in the standings with only one top-five finish entering this weekend’s event on the Springfield Mile, a place that’s a welcoming sight to the Canton, Ill. native who’s earned three of his eight career Silver Crown wins on Illinois soil following victories in 2016 and 2018 at Du Quoin and last year at Springfield where a repeat victory this Saturday would be a God-send in more ways than one.

“It would be huge,” Windom admitted. “We’ve had our fair share of struggles with the car, but we’ve definitely had the speed at every dirt race. We’ve led both dirt races so far and fell out. I know we’ve got the car to do it, but we’ve just got to keep all the components together and I know we can repeat and get another win there.”


In his last trip to a one-mile dirt oval, Windom started from the outside of the front row and led the opening five laps before enduring a terrifying incident down the front straightaway that saw him flip several times. In June at Williams Grove Speedway, Windom led 48 laps from the outside of the front row before a controversial moment with Steve Buckwalter ensued on the final lap. Windom picked up the lead and appeared headed for victory on the last lap when his right rear tire went flat.

His two most recent series victories both came in Illinois a year ago, but his first at Springfield was particularly special as he became the second Illinois native to repeat his victory at Springfield and first since A.J. Fike in 2012-13.

“It was awesome,” Windom remembers. “A lot of my family and friends were there. The miles feel a little cooler winning for whatever reason. I don’t know if it’s the attrition of the long races, but it always feels more rewarding when you can run a full 100 laps and win like that. I love the Crown cars on the mile tracks. It’s one of my favorite types of racing to do. I’m definitely looking forward to this one; I look forward to it every year on the schedule. I’m so ready to get back there.”

Windom has gotten the proverbial ball rolling in USAC’s AMSOIL National Sprint Car and NOS Energy Drink National Midget divisions this year, winning three times in the Sprint and resides 5th in the standings while winning twice in the midget where he stands runner-up in the points at the moment.

Without question, he still knows how to get to the front, which can prove to be a different animal in Silver Crown racing on a dirt mile where the fine line of patience and when to “go” face off. Last year, Windom started 13th at Springfield and only worked his way into the lead with eight laps remaining past Kevin Thomas, Jr. for the win. With changing track conditions, starting further back and having to concentrate on running your own race with 30 or more cars surrounding yourself, that can be a tricky proposition, but Windom’s 66 starts in the series have helped him immensely in figuring out this puzzle.

“You kind of pick and choose,” Windom explained. “Sometimes, it depends on the track’s state, obviously. I’ve had my fair share of being on the other end of the spectrum, running out of fuel or running too hard the first half of the race and not being there at the end and I’ve learned how to pass pretty well on the miles. If I know I have the car, I can just drive around and hang out for the first half of the race, really the first three quarters of the race, so I’m in a position to be there in the end. That’s just huge in these cars. It takes experience and seat time in order to learn how to do that. You’ve seen guys who go out and lead the first half of the race and you’re able to get them there at the end. That’ s what I’ve learned how to do over the last few years in the mile races.”

That experience is what helped him reach victory lane at Springfield in 2018. It’s also the type of strategy that can help propel him to better fortune and better days ahead beginning Saturday at Springfield.