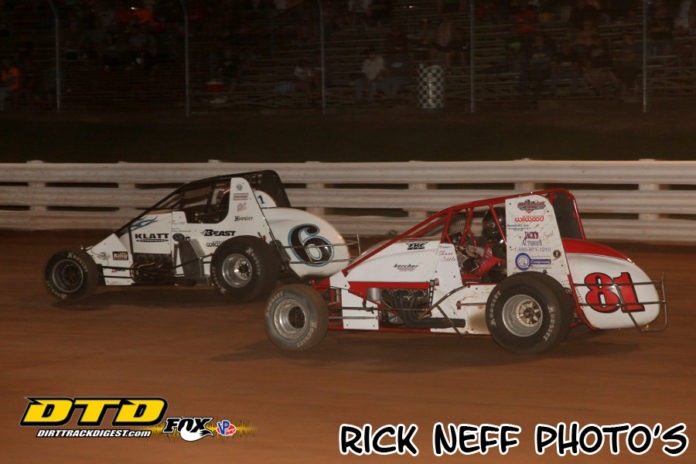 Cottle’s ride to the $8,100 victory came after he changed a left rear tire on lap 30 of the race and restarted at the rear of the field.

Broken Arrow Oklahoma’s Brady Bacon took the win in the USAC East 360 sprint feature after leader Robert Ballou of Rocklin, California turned into the outside first turn fence before flipping on lap 14.

The original start of the Silver Crown event was red-flagged for a third turn flip as executed by Arizona’s Casey Buckman.

Cottle originally started the Holland Classic in 23rd and raced under the radar up to the point of his blown left rear tire with 44 laps to go.

Up to that point, polesitter CJ Leary of Greenfield, Indiana, had held sway over second starter Justin Grant of Ione, California.

When Cottle’s left rear let go near the start-finish line on lap 30, Mechanicsburg’s Dave Berkheimer ended up climbing up and over Cottle’s machine before flipping near the end of the frontstretch as fire shot from the bottom of his car.

Cottle then got the chance to replace his tire and restart at the tail of the field.

By lap 35, Leary and Grant had Brady Bacon, Kevin Thomas Jr. and Chris Windom in pursuit and with 47 laps completed the front four cars were threatening to settle the event between themselves as they pulled away from the field.

However tire preservation and tire wear would become an issue before the finish.

With 22 laps to go, Thomas and Windom made contact while racing for fourth with Thomas getting sidelined for the duration of the race while also regrouping the field for a restart.

And Leary poured on the speed when action resumed, trying to run away from the pack before the entire complexion of the extended distance affair changed during another caution period with seven laps to go.

Under the caution, Windom developed a right rear flat, forcing him to slow on the restart.

Bacon then restarted third and tried to work on Grant as Grant went after leader Leary, only to see caution again appear on lap 69, this time for more tire troubles.

And then Grant came up lame on lap 70, again with tire woes, dropping out of second, moving Bacon into the spot while also finding Cottle now running just behind.

A master on the low side, Cottle out gunned Bacon on lap 71 to race into second and set his sights on the leader only to again see the pace hampered with two laps to go.

The final restart, as with the last several, saw Leary drive a fast pace back to the green flag while trying to get a jump on the field as action resumed.

But Cottle stuck with him on the restart and tried a low move into the first turn.

Leary fought back that advance and then blasted low through turns three and four only to see Cottle change lanes as the pair raced onto the frontstretch.

And it was with picture perfect skills that Cottle got to Leary’s outside for the race-winning pass just as the pair crossed the start/finish line under the white flag.

Cottle then surged ahead as the pair raced into the first corner as he went on to the victory by .774 seconds.

Leary set fast time over the field with a lap of 21.676 seconds.

However Bacon soon lost the lead to eighth starter Robert Ballou who was working the top cushion to perfection and in thrilling style as Ballou went out front on the fifth tour.

The leader hit traffic with nine laps to go but was working perfectly through the field when it appeared something may have broken on the front of his racer in the first turn.

Ballou pushed up over the cushion as he set the car into the corner and careened straight into the outside fence before flipping although escaping injury.

This handed the lead back to Bacon with defending series champion Steve Drevicki lining up second for the restart.

Bacon controlled action on the restart and again on a restart with five laps to go but a final restart with one lap to go found Drevicki in contention.

The Reading driver got under Bacon in the first turn for the lead only to see Bacon hold the line and race to his outside in turn two before the pair drag raced into the third corner.

Drevicki hung tough with Bacon through the turns but Bacon had just enough bite to surge ahead to the finish, taking the win by. .381 seconds.