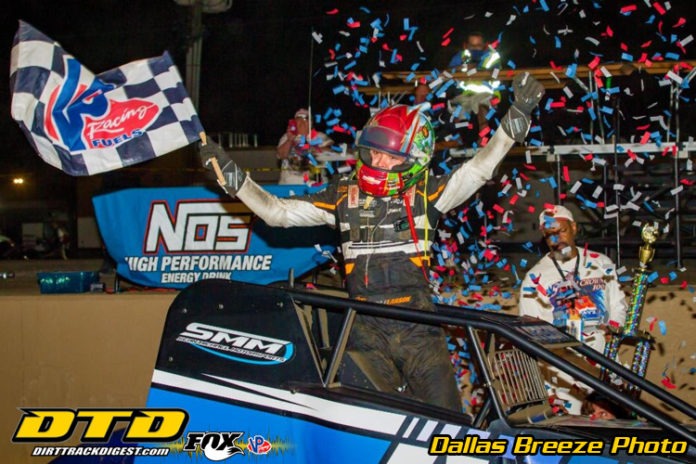 INDIANAPOLIS, IN – It’s not often that a driver can win the pole and also start from the back, charge to the front and win all in the same race. But, as the 2020 racing season has repeatedly asked us, is there anything Kyle Larson can’t do?

In his first USAC Silver Crown appearance in eight seasons, Larson achieved another remarkable feat Sunday night at the Indiana State Fairgrounds in the 65th running of the Hoosier Hundred after he and his team opted to change the right rear tire following Fatheadz qualifying on his Sean Michael Motorsports/JVI Group – Heffner Racing Enterprises – Blazer’s Body Shop/Maxim/Kistler Chevy, gladly accepting the penalty that came along with it that sent him to the back of the pack for the start of the 100-lap main event on the one-mile dirt oval.

After initially qualifying for the pole position with the fastest single lap turned in the event in a quarter century, the decision sent Larson, along with six others who chose to swap out their right rear rubber, to the tail for the start. Specifically, Larson was re-slotted in the 22nd starting spot, which elevated Hoosier Hundred Rookie Logan Seavey and veteran C.J. Leary to the front row.

“I think we made a good call there to give up our qualifying position to put on a harder compound tire which allowed me to be aggressive all race long,” Larson revealed.


That mentality of aggressiveness from Larson was evident early and often from the drop of the green flag which saw Leary shoot out to the lead from his outside front row starting spot to lead early. Meanwhile, two separate hard charges were simultaneously taking place. Defending Hoosier Hundred winner Tyler Courtney had risen from his 14th starting spot to 2nd in just seven laps while Larson went 22nd to 4th by lap nine when the first major melee of the night occurred.

First, Kyle Robbins slowed substantially coming out of turn four to force out the first yellow. Under yellow, as several of the top-ten frontrunners slowed for the caution in turn two, a major jumble up sent four-time Hoosier Hundred winner and seventh running Kody Swanson flipping along with 11th running David Byrne, who landed his car atop the inside guardrail. Austin Nemire, Jimmy Light and Terry Babb were also collected in the incident. All were uninjured, but out of the race for good.

On the attempted resumption, Courtney ripped around Leary for the top spot entering turn one while, simultaneously, Larson did the same to Seavey for third. Just moments later, disaster ensued once again in the very same spot in turn two as Hoosier Hundred Rookie Carmen Perigo flipped wildly down the back straightaway. Behind him, the field checked up on the binders with 2016 HH pole winner, Brady Bacon, getting the worst end of the deal, barrel rolling down the back straight. Both were uninjured.

John Heydenreich was also involved in the incident, coming to a rest up right against the inner guardrail in turn two, and was later transported for further observation, but was awake and alert.

The second lap 10 restart was déjà vu for Courtney as he repeated his outside turn one move for the lead by Leary just following the waving of the green flag. Larson, likewise, moved around Seavey for third in turn three, then took second a half lap later with an outside pass of Leary in turn one on the 10th lap.

Following lap 16 wall contact by Chris Urish between turns three and four that necessitated a yellow, Larson went to work on Courtney for the lead. On the 24th circuit, Larson faked high, then low on the front straight behind Courtney before taking the high side to storm around Courtney for the top of the leaderboard entering turn three a half lap later with a quarter of the race in the books.

Leary took over second from Courtney on the following lap, the 26th, and set forth toward Larson, ultimately reclaiming the lead on the 30th trip around the Indy Mile with an inside turn one pass. Leary, whose father Chuck Leary won the 1997 edition of the Hoosier Hundred, was aiming to become the first son of a former winner to also claim victory in the event.

Action slowed once again on the 34th lap as contact between Matt Westfall and Bryan Gossel in turn four sent Gossel rocketing hard into the outside concrete wall before flipping in his maiden Hoosier Hundred start, marking the fifth and final flip of the feature event. Gossel, who was running 21st at the time, emerged from the wreck unscathed.

From the ensuing restart onward, the front runners settled into a groove with Leary maintaining a one second interval over Larson as the race passed through the middle stages which saw another HH Rookie, Jake Swanson, enter the top-five, then to fourth, with two more accidents occurring for 8th running Chad Kemenah (lap 55) and 14th place Mike Haggenbottom (lap 64), both of whom had a meeting with the turn three outside wall, which ended both drivers’ nights.

Although not leading at that stage, Larson, nonetheless, remained on the leader’s pace while being mindful of his equipment, readying himself for a surge when the opportunity arose.

“It was a long race, but through the mid-point, I just tried to pace C.J. as much as I could, and also pace Tyler (Courtney) behind me,” Larson recalled. “You just never know how your tire is when you see theirs under yellow.”

The lap 69 restart was second place-running Larson’s finest moment of the race as he immediately darted to the outside of Leary at the drop of the green flag, then cranked his car completely sideways in front of Leary as he blitzed to the top spot for good. Upon entry to turn one, Leary slid up the racetrack, allowing Courtney to dive underneath for second and dropping Leary to 3rd.

“I felt like on all the restarts, I could fire off better than C.J. for a few laps, so I wanted to be aggressive on that final restart,” Larson explained. “I was able to get around him and then I wanted to set a fast pace. I felt like we probably all had enough wear in our tires to get by for another 30 laps.”

With just a quarter of the race remaining, Courtney slowly but surely reeled Larson in, from five tenths, to four tenths to three tenths, and was right there withing striking distance on the 79th lap when his car slowed dramatically off turn four with an engine issue, forcing his car to a slow crawl to the back straightaway exit and ending his bid for a repeat HH triumph.

Newly-minted second-place driver Leary instantaneously closed the gap on Larson, standing just two car lengths back on the 82nd go-around, but was unable to get much closer than that, as Larson incrementally bumped up his lead to eight-tenths of a second.
One more final bout with lapped traffic was presented to Larson with seven laps remaining as Patrick Lawson and Ronnie Wuerdeman were momentarily two wide entering turn one with Larson rapidly approaching just behind. Larson expertly escaped through the gap in between turns one and two, only losing a single tenth off his lead to Leary in the process from 0.8 to 0.7 sec.

Larson didn’t allow Leary to get any closer than that in the final seven laps, reconstructing the interval between the two to a whopping 2.052 sec. at race’s end as Larson raced to his first USAC Silver Crown victory since his legendary 4-Crown Nationals USAC sweep at Eldora Speedway of 2011.

One-hundred-mile dirt USAC Silver Crown races are taxing both mentally and physically on the driver, but for Larson, the achievement of success that comes from the fruits of his and the team’s labor is the ultimate reward.

“I just ran really hard, but it was tough. I had my brakes to the floor and my power steering was really tight. It was a workout for 100 laps but it’s all worth it. To add my name to the list, it feels special.”

Following Larson’s third career USAC Silver Crown win on Sunday night, both winners on the dirt have come from way back in the pack to reach victory lane. Shane Cottle started 23rd and won on Aug. 9 at Selinsgrove (Pa.) Speedway while Larson charged from the 22nd starting position to win at the Indiana State Fairgrounds.

With Justin Grant’s 8th place run on Sunday, along with Kody Swanson’s early race misfortune, Grant has now taken over the USAC Silver Crown point lead by 22 markers over Swanson.

Aaron Pierce’s time of 6:36.928 during Sunday’s qualifying race set a brand new 12-lap USAC Silver Crown track record at the Indiana State Fairgrounds, eclipsing the former mark of 6:42.010, which had been held by Gene Lee Gibson since Sept. 10, 1988.