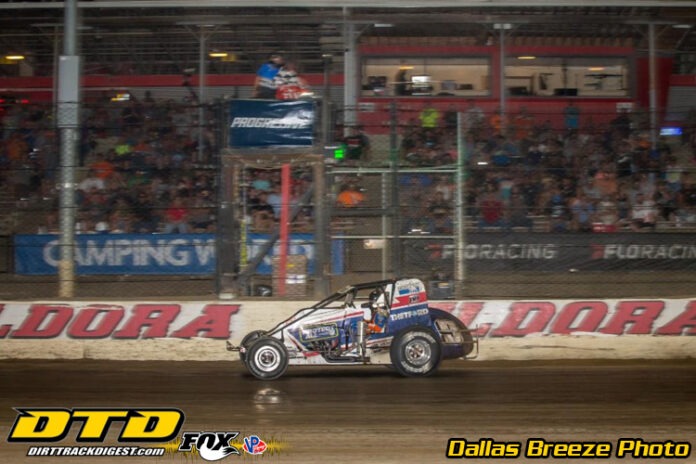 It’s easy to see why, and it also seems clear the feeling is mutual.

With USAC’s three national divisions, Courtney’s love for Eldora Speedway knows no bounds, as the Indianapolis, Ind. driver collected his ninth career USAC national feature win at the half-mile dirt oval, placing him within the top-five all-time in that category behind only Jack Hewitt (24 wins), Dave Darland (14), Rich Vogler (12), Tracy Hines (11) and alongside Larry Dickson (9).


Courtney’s route to a second career Eldora USAC Silver Crown triumph was in the realm of categorical perfection from start-to-finish after topping the charts in both practice sessions and leading all 50 laps of the night’s feature.

Starting second was the only “blemish” on an otherwise flawless evening after missing out on the pole on his qualifying run. Courtney more than made up for it, walloping the field with a 7.986 second margin of victory aboard his Chris Dyson Racing/Thetford – ProtectAll – Norcold – Racer Magazine/Maxim/Kistler Chevy.

The commanding performance also provided the Chris Dyson Racing No. 9 its first ever USAC Silver Crown victory after several close calls in its fourth year of competition with the series. The instance marked the third-straight series event of the season to feature a first-time winning entrant following Doran Enterprises (Lucas Oil Raceway) and BLS Motorsports (Williams Grove Speedway).

What made it even more rewarding is that the team’s performance came following an auspicious start and came via a pairing that was put together in the 11th hour, paving the way for Courtney to make his first official appearance with the Chris Dyson Racing team.

“It was a rough start to the day,” Courtney explained. “I killed two wheels and a front end and had to change a front end before qualifying. I made these guys work way harder than they needed to. I just had to find my limit and I sure did. I had a weekend open up, kind of last minute, put it together, and I’m glad we did. This is cool. Anytime you get to win at Eldora, especially in a Silver Crown car, is special.”

Courtney started from the outside of the front row in the 30-car field, which was the largest Silver Crown lineup to ever take the green flag at Eldora in what was the series’ 40th appearance at the track. The first Silver Crown race at Eldora held outside the autumn season since 1982 saw Courtney power to the lead on the opening lap around the outside of pole sitter C.J. Leary, and instantaneously began to assert his dominance.

By lap five, Courtney’s margin over Leary was already a full second. By lap 10, the interval was 2.762 sec. as Courtney was already making hay by working his way past those at the tail end of the running order. That’s when the feature’s only stoppage occurred, a flat right rear tire on the car of first-time USAC Silver Crown starter Nathan Moore, who took a hop, skip and a jump in turn three just prior to the rubber giving way, ending his race on the spot.

The gap was thus tightened between Courtney and the rest of the frontrunners by virtue of the caution, and thereby initiated the lone challenge to his reign at the front. Leary issued the challenge, diamonding off the top of turn two and cutting underneath Courtney down the back straightaway before racing past him entering the third turn.

As Leary slid up to the top between turns three and four in front of Courtney, Kevin Thomas Jr. was completely even Steven with Leary on the bottom. Courtney regathered, pulled the trigger and cut down off the banking to split between both Leary and Thomas exiting turn four to reclaim the lead.

The brief shuffle up front proved to be a fleeting moment for all involved as Courtney immediately split away from both Leary and Thomas, as did Chris Windom, who overtook both on lap 14 to slot into the second position.

By lap 20, the margin for Courtney was 4.046 seconds and ever-growing over Windom, Thomas, and now Matt Westfall, who had carved his way up into the fourth spot while fourth starting early frontrunner Justin Grant fell to the wayside, pulling into the pits at the halfway mark, on lap 25, with a magneto issue. The reigning series champion was running 12th at the time.

On lap 30, Courtney’s lead had ballooned to a full-straightaway, 6.7 seconds ahead, and still growing, despite a jolting tag of the turn two wall with his right rear tire on the 35th lap. There was no resulting halt for Courtney as he proceeded past his early-race challenger just 30 laps prior, Leary, putting him a lap down with 10 laps remaining.

Classic Eldora, right up against the wall was Courtney’s path on this particular night. Just the way he likes it.

“These are big heavy beasts and you kind of needed it to be slick,” Courtney said. “I’m glad we had a little bit to lean on there on the fence. I don’t really like running this place anywhere else. I’m glad we got to run the fence. I was kind of waiting for it to maybe change but I was watching the lapped cars to see if they’d pull away from me or not, whether it was cleaning off or not, or maybe taking a little bit of rubber.”

Nobody was going to pull away from Courtney on this night, early, middle or late in the race. Just the opposite, in fact, as the laps ticked away. Courtney checked out for his third career USAC Silver Crown victory, and first with the series at Eldora since 2017, by nearly eight seconds with Chris Windom, Kody Swanson, Kevin Thomas Jr. and Brady Bacon rounding out the top-five.

Chris Windom (Canton, Ill.) felt he needed a yellow to regroup to gain some semblance of a shot at Courtney after finding his footing later in the going in his Hans Lein/NOS Energy Drink – Lamers Motor Racing – Utica Bar/DRC/Stanton Mopar.

“Freaking Tyler is just hard to beat here,” Windom lamented. “I wish we could’ve gotten one caution there to make it interesting at any point, but he was really good. I felt like I finally got my line figured out in one and two and I was making good time, but I felt like once it started taking rubber in three and four there through the middle, I might have been able to stay with him, but I never got the chance. He got out front and got great track position on everybody, and he’s always the guy to beat here. Running second sucks, but coming from ninth to do it, isn’t bad.”

Kody Swanson’s (Kingsburg, Calif.) busy night included a near-victory in the preceding Camping World Superstar Racing Experience (SRX) 50-lap event earlier in the night which saw him finish a close second behind winner Tony Stewart. As the only driver pulling double-duty in both SRX and USAC Silver Crown competition, Swanson jumped in the Mark Swanson Encore Team/Rosewood Machine & Tool – Jet Star/Maxim/Moyle Toyota and charged from 15th to 3rd to earn both the KSE Racing Products Hard Charger award as well as the GSP Quality Driving Performance of the Night.

“I’m thankful for the opportunity with SRX, but I’m really thankful for Kent Wolters and this Mark Swanson Encore Team,” Kody stated. “I didn’t feel very good earlier, but I went and did the SRX thing, and these boys went to work and gave me one whale of a racecar. Coming from pretty deep up to third at a track that is certainly not my best, these guys carried me tonight and I’m fortunate to be on their team.

We had a really great car there through the middle,” Kody continued. “And I felt like I just needed to pick where they weren’t. There were some guys we went under and some we went around; I just tried to keep it straight. I’m certainly not brave enough to run it on the fence like Tyler Courtney for 50 laps. I did the best I could do and got these guys the best finish I could. They certainly deserve more, and I wish I could’ve done it for them.”

C.J. Leary (Greenfield, Ind.), who finished 14th in the feature, earned his third career fast time during Fatheadz Eyewear Qualifying to start the tonight, surpassing his father, 1995 Silver Crown Rookie of the Year Chuck Leary, on the all-time list.

Kyle Cummins (Princeton, Ind.) suffered a mechanical issue during practice, which initiated contact with the turn three wall. Cummins’ car flipped over and the substantial damage to the right side of the racecar forced him to be a spectator for the remainder of the event and resulted in him being the only driver unable to participate in the night’s feature.