WINCHESTER, IN – Three races. Three winners. That’s been the USAC Silver Crown season in a nutshell so far as the series heads for its first foray on the 37 degree high banks of Indiana’s Winchester Speedway this Thursday night, July 22.

However, it’s a man who hasn’t yet won that leads the championship entering mid-July, that being Shane Cottle, the only driver to have finished in the top-10 in all three of his starts with an 8th at Lucas Oil, a 2nd at Williams Grove and a 9th at Eldora.

Cottle (Kansas, Ill.) leads the points by a 28-point margin while he and the Springfield, Ohio based BCR Group team look to take control as they both vie for their first series championship.

Cottle, a veteran of 60 starts with the series since his 2006 debut, had one of the finest seasons of his Silver Crown career in 2020, winning his first series race in 13 years, and finishing 6th in the final standings despite missing a race. For Cottle, that ranked as his best season performance since 2008 in which he finished 5th in points.


The 49-year-old racer is already well ahead of that pace this year, leading the point standings for the first time in his career as the pilot of the BCR Group/Flint Trucking – QS Quality Components – Duncan Oil – Kercher Engines entry that is crew chiefed by Malcolm Lovelace.

Logan Seavey (Sutter, Calif.) remains at the head of the Rookie of the Year standings, 5th overall in the series points. Bobby Santos (Franklin, Mass.), who led the first 63 laps of the opener at Lucas Oil, leads all drivers in total laps led with 63.

Brady Bacon (Broken Arrow, Okla.), Kody Swanson (Kingsburg, Calif.) and Chris Windom (Canton, Ill.) have each made only two starts apiece, but have made both count with top-five results in each of their appearances. Swanson has made the biggest charge of the season (+12) with a 15th to 3rd run at Eldora.

The series boasts three different winners in the first three races, and also can say the same as far as pole winners too with Tanner Swanson (Lucas Oil), Jason McDougal (Williams Grove) and C.J. Leary (Eldora) each taking their turn at leading the field.

McDougal (Broken Arrow, Okla.) has provided the best start and finish by a Rookie with a 6th place finish at Williams Grove after starting the pole, the best result thus far among all members of the 2021 Rookie class.

This Thursday at Winchester, the pits open at Noon ET with the drivers meeting set for 3pm on the front stretch, practice at 4pm, Fatheadz Qualifying at 6pm, a driver’s autograph session at 6:30pm in the midway, driver introductions at 7:45pm, opening ceremonies at 8pm and the 100-lap main event at 8:15pm.

TOP “ROOKIE” FINISHER OF THE RACE: 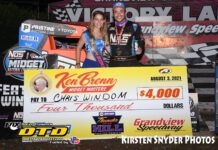 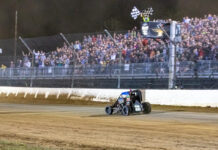 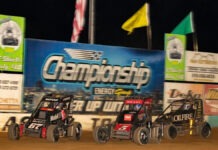