It was at Selinsgrove in which the Sutter, California driver made his first career Silver Crown start on this same weekend one year ago, an experience which went swimmingly until the final corner of the final lap when a flat right rear tire sealed his fate, dropping him from 4th all the way back to 10th in the final tally.

This past June at fellow PA battleground Williams Grove Speedway, Seavey was in control of the race nearing midway, leading for 22 laps until a stripped Pitman Arm ended the bid for a first career USAC Silver Crown score.

On Sunday at Selinsgrove, once Seavey catapulted to the lead on the ninth lap, there wasn’t am obstruction that was going to trip him up on his quest, although a caution with two laps to go tossed a monkey wrench into those plans for a moment.

Seavey thwarted a last ditch effort by second-running C.J. Leary on the first lap of a green-white-checkered shootout, then pulled away once more for good measure to win his first career USAC Silver Crown race worth $8,075 in celebration of the track’s 75th anniversary, and whose first race was won by Holland, the 1949 Indianapolis 500 victor and National Sprint Car Hall of Famer from the Keystone state.

A succession of race winners have proceeded to victory lane thus far during the first half of the season with five different drivers capturing victories during the first five events to start the season. That’s the first time that’s happened since 2013.

After a number of close calls coming into what was his eighth career series start, Seavey made Sunday’s Selinsgrove stop his turn on the merry-go-round of race winners.

“I feel like we had a great chance to win Williams Grove, but it got taken from us with a part failure,” Seavey recalled. “We have speed right now, which is awesome, and it’s cool to get my first Silver Crown win. I love this series. I know I’m new at it but I’m just having so much fun.”

After bursting onto the USAC scene as the champion in his Rookie National Midget season of 2018, Seavey has since branched out to USAC’s AMSOIL National Sprint Car division, recently winning three-in-a-row during Indiana Sprint Week, and has now translated that success to Silver Crown racing.

In fact, Seavey has now won feature events in all three of USAC’s National series in 2021, joining Justin Grant in the exclusive club, which Grant put himself in one night before.

But with Silver Crown being his newest foray, and with talented individual crewman Robbie Rice, Ronnie Gardner and Joe Devin at the helm of the team, Seavey feels right at home.

“Growing up, I always just wanted to race midgets,” Seavey revealed. “As soon as I got to the National series, I realized I was doing okay in midgets, but I feel like this fits me so well. It’s a perfect mixture of running hard and saving your tires, trying to find speed and the balance of both, and it’s going so well. I’ve got a really good racecar and it drives like a dream.”

The dream became a reality for Seavey on the initial start, charging on the bottom to within a car length of the high-riding Leary at the line on the opening lap after starting third.

Multiple stoppages lulled the beginning stages of the race with defending race winner and sixth-starting Shane Cottle being knocked out on the second lap as he rolled to a stop on the back straightaway. He’d return but ultimately dropped by the wayside for good 32 laps into the race, finishing 18th.

Leary continued his role as a rim rider as he led following the restart while Jake Swanson slipped into second past Seavey, who remained a car length behind, on laps six and seven. Seavey carved his way around the bottom to regain second from J. Swanson by a half-car length at the line.

Moments later, the second of the two early race casualties came on the eighth lap when three-time Selinsgrove 360 c.i. Sprint Car champ Mark Smith, who had just passed Matt Westfall for 10th, slid up and tagged the outer guardrail in turns three and four with his right rear tire, sending him flipping multiple times before coming to a rest on his wheels, putting an early end to his first series start in four seasons.

One lap after the restart, on lap 10, Seavey surged to the lead underneath Leary, beating the pole sitter and Selinsgrove one-lap USAC Silver Crown track record holder to the stripe by a couple feet before completing the pass in turn one.

For most intents and purposes, that proved to be the winning move for the next 53 laps as Seavey began to stretch the lead out to a full second as he worked a unique line, crawling the bottom of turns three and four, while entering on the topside of one and two with Leary and J. Swanson following in pursuit.

At the halfway mark, Seavey’s interval had grown to a full straightaway over Leary, who gapped J. Swanson behind the lapped cars of Austin Nemire and Matt Goodnight.

With 22 to go, Seavey caught yet another cluster of traffic, which did somewhat stifle him momentarily. Leary, in response, shaved off two full seconds from Seavey’s lead to 3.2 seconds as Seavey continued to try to find his way past Goodnight, Nemire & Windom.

Seavey’s lead shrunk further to 2.8 seconds with 17 laps to go with Leary gradually reeling him in, but Seavey found clean air after driving around the outside of Windom to put him a lap down. Leary subsequently turned his best lap of the race with 11 to go, turning up the wick as much as he could to try to run down the dominant Seavey.

All doubt for Seavey was removed with four laps to go when he drove around the lapped car of Mike Haggenbottom, which provided him with a free and clear path ahead just as Leary had cut the lead to under 3 seconds.

Yet, the drama unfolded with two laps to go when 15th running Matt Goodnight stopped on the back straightaway to bring out the yellow flag, thus setting up a two-lap dash to the finish and repositioning the lapped cars to the tail, by rule, and placing Leary right on Seavey’s rear bumper for the green-white-checkered conclusion.

Leary posed an immediate challenge to Seavey by swinging to the bottom between turns one and two, edging ahead momentarily at the exit of two but was unable get enough of a push to remain ahead as Seavey stretched the lead out once again, and for the final time, by turning the fastest lap of the entire race on the final laps to earn a 1.089 second triumph over Leary, J. Swanson, Shane Cockrum and Justin Grant.

After remaining in control without much in the way of challenge for 65 or so laps, the yellow flag was the absolute last thing Seavey wanted to see. He knew he had the best stuff, as he had proved throughout, but what were the driver’s behind saving in the proverbial tank? It’s a difficult dichotomy to untangle, and Seavey had a moment to run through it all in his mind before the green reemerged.

“I was just trying to stay calm,” Seavey recalled. “I knew we were fast and, obviously, we had a good car and had speed all day. We had a pretty decent gap all day, but it’s a little bit nerve wracking knowing maybe they know something we don’t. I felt like I was going so slow to take care of my tire and I know they were doing the same thing and were probably banking on mine being a little worse. You kind of expect a late caution because you feel like somebody’s going to blow a tire or something. With two to go, it’s about the worst time it can happen.”

A heartbreaking second-place finish for C.J. Leary (Greenfield, Ind.) last year at Selinsgrove was replaced by a bit more satisfying of a runner-up finish on Sunday, which began with him lowering his own personal USAC Silver Crown track record at Selinsgrove with a time of 21.185 in Fatheadz Eyewear Qualifying in his Leary Racing/Leary Construction – Gray Auto – Valvoline/DRC/1-Way Toyota.

“We’re a lot happier than we were last year after such a good run,” Leary admitted. “It was another good run tonight; the car was really good. We gambled with the softer tire, and I waited too long. I let Logan get too big of a lead. I felt like I was running him down a little bit there in traffic, but it was just too much to overcome and on that restart, I saw Chris (Windom), and right before the yellow, he was yarding me off the bottom of two. I was like, ‘man, I might be able to make that work.’ I just tried to run hard enough to keep Jake (Swanson) behind me. I was going to do that to Logan, but he was so good there early and I let him get too far away. These races are so hard to win, and a lot of strategy goes into it. Ours just didn’t play out tonight.”

Similarly to Seavey, Jake Swanson (Anaheim, Calif.) made his USAC Silver Crown debut at Selinsgrove in 2020, then returned to stand on the podium, finishing a career-best third in his DMW Motorsports/Advanced Materials Technologies – US Auto Cure – Phoenix Pavers/DRC/Wilcox Chevy.

“We were really good,” Swanson said. “I just feel like there’s a few things I could’ve done better there to get by C.J. I think I squeezed a little bit too hard too early and used up my stuff to where I could just maintain with them. At the end of it, I was just hoping I could keep up with them and maybe in a position to capitalize on something. These guys are really good and it’s rare when they make mistakes, but when they do, it’s still hard to capitalize on. I’m really happy, really pumped with our result, our best finish.”

**Mark Smith flipped on lap 8 of the feature. 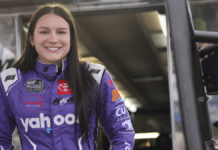