BROWNSBURG, IN – On a night in which he pocketed a total of $77,100 in total prizes, Kody Swanson saved his best for his last in an encore performance during Saturday night’s inaugural Hoosier Classic USAC Silver Crown feature at Lucas Oil Raceway in Brownsburg, Ind.

After winning the Sprint Car feature and finishing third in the midget earlier in the evening, the Kingsburg, Calif. native wrapped up the evening with a dominant, picture-perfect Silver Crown performance at the .686-mile paved oval, leading all 100 laps in his Doran Enterprises/Glenn Farms – Lykins Energy Solutions/Beast/Lanci Ford.

By winning two of the three features throughout the program, Swanson netted the Fatheadz Challenge $50,000 bonus and, added in with his $12,000 Silver Crown victory, $1,100 pole award courtesy of Fatheadz Eyewear and PJ1, along with his winnings from the sprint car and midget events, it totaled the richest day for any driver walking out of a Lucas Oil Raceway USAC event, surpassing the $60,280 captured by Dave Steele following his sweep of the Mopar Twin 25 Midget races in 2002.

Every race for Swanson seemingly brings another record, another milestone, another mind-boggling moment that is recorded in the record books. But with so much at play, with all the preceding noteworthy tidbits and the hefty paycheck awaiting, Swanson felt the heart pumping at a bit of a higher rate in anticipation for this particular night.


“Kevin Doran and everybody that’s a part of this 77 team have been working really hard and worked really hard today,” Swanson praised. “I was probably a little grumpy just because the pressure was getting to me, and I know what’s at stake. Everybody kept working and never quit and I’m really thankful for the opportunity to race for them and what we’ve been able to accomplish at Lucas Oil Raceway this year.”

With his LOR victory, Swanson has now opened up a 48-point lead in the USAC Silver Crown standings as he chases a record-extending, unparalleled sixth series championship. This all coming despite missing a race at Williams Grove Speedway in June at a time when his plans didn’t include a full run at another championship. But, now in the driver’s seat of the title race once again, Swanson is game for whatever it takes.

“I wasn’t planning on it,” Swanson admitted. “I wasn’t running for points and was trying to do different things to make some new opportunities in my career. But at this point, to be in a great situation with a chance, and a couple people willing to stick me in a couple of dirt cars down the stretch, maybe we’ll give it a shot.”

From the pole, Swanson was dominant early, often and throughout, immediately gapping the field to the tune of 1.253 seconds in the early stages.

After 15th running Shane Cottle stopped in turn four to prompt a caution on lap 38, eighth running Ryan Newman took a detour to the pit area with mechanical trouble, which cost him a lap and nine positions back to 17th, where he’d run until lap 58 when he was forced to bow out for good. The 1999 USAC Silver Crown champ, who was making his first series start in two years, finished with a 20th place result.

The driver on the move through the middle portion of the race was seventh starting Tyler Roahrig in his USAC Silver Crown debut. The 2021 Little 500 Sprint Car winner at Anderson (Ind.) Speedway powered under Tanner Swanson for the third spot between turns three and four on the 45th lap, then subsequently chased down David Byrne for second on the 50th lap and jetted past in turn one for the runner-up position.

Reigning USAC Silver Crown champ Justin Grant, running 14th, took a huge hit in more ways than one on the 81st lap when he spun sideways at the exit of turn four and slammed backwards against the infield front straightaway wall, knocking him out of the race and delivering a massive blow to his title chances. Grant was one point out of the lead and second in the standings coming in, but now resides in third, a distant 50 points behind.

Trouble also found fourth-running Derek Bischak with 13 laps remaining as he slowed to a stop at the entrance to the pits in turn three. It was a heartbreaker for the Angola, Ind. driver who was on pace to post his best career USAC Silver Crown finish.

The biggest melee of the night occurred on lap 94 as Tanner Swanson and Aaron Pierce touched wheels while battling for fifth in between turns one and two. The contact was made between Tanner’s right from tire and Pierce’s left rear, sending Pierce spinning to the bottom of turn two. Nathan Byrd, running 10th, attempted to take evasive action, but collided with Pierce, knocking both out of the race and heavily damaging both machines.

Meanwhile, ninth running Eric Gordon also stopped on the back straightaway. His car was loaded up and carried back to the pits.

The yellow flag period, and the ensuing cleanup during the caution laps, which counted up to lap 98, created a green-white-checkered finish scenario.

When the green flag was displayed, Roahrig was able to hang with K. Swanson for the first of the two laps, maintaining a distance of one to two car lengths. However, on the second lap of the GWC, and final lap of the race, K. Swanson ably stretched his lead out, ultimately prevailing by a 0.988 margin over Roahrig, Santos, Tanner Swanson and Byrne.

Roahrig became just the second driver in the last 28 years to finish inside the top-two in his first USAC Silver Crown start. David Gravel was the most recent to do so, finishing second at the Illinois State Fairgrounds in 2020. Prior to that occurrence, the most recent occasion of a top-two debut came on pavement and was turned in by P.J. Jones at Lucas Oil Raceway in 1994.

“I didn’t forecast a second place right at first, but this is a great team,” Roahrig acknowledged. “There’s a reason this car is always fast. Terry Klatt and Bob East put a good piece under me. I can’t say I’m totally surprised because I’m in good stuff, but I’ve still got work to do here. This place is really tough and I’m sure the car’s still probably better than the driver. That was a lot of fun. I think these cars fit me because of my background with late models.”

Bobby Santos (Franklin, Mass.) finished his Hoosier Classic with three consecutive podium finishes with a third in the sprint car, a second in the midget, and closed out with another third-place result in his DJ Racing/Brown & Miller Racing Solutions – Simpson Race Products/Beast/Speedway Chevy Silver Crown car.

“Overall, I can’t complain,” Santos said. “We were just not as good as we wanted to be. But I can’t be upset. It was still a good night. We’ve always got to keep working on it, keep making changes and just keep getting better. It’s just never good enough.”

Ninth-place finisher Russ Gamester reached a milestone on Saturday night by making his 200th career USAC Silver Crown start, becoming the second driver to reach the 200 mark. He remains just one behind Dave Darland (201), who owns the all-time record in that category. 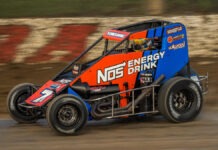