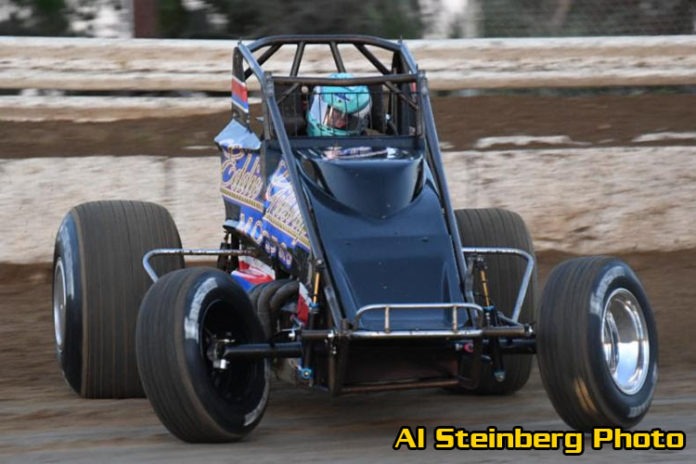 OCALA, FL – A seventh-place starting position and a 360 degree spin at the midway point was not enough to deter Hunter Schuerenberg on the path to a “Winter Dirt Games VIII” victory Saturday night at Bubba Raceway Park.

The 27-year-old Sikeston, Missouri native steadily moved his way toward the front of the field throughout the 30-lap event before surging into the lead with seven laps remaining to collect his first USAC AMSOIL National Sprint Car feature victory in nearly three years since a 2014 victory in McCool Junction, Nebraska as well as his ninth career series triumph, joining Mario Andretti and Robbie Stanley for 47th on the all-time list.

At the drop of the green, though, outside front row starter Thomas Meseraull held the point, fending off a furious challenge from previous night’s winner Justin Grant and defending USAC Silver Crown titlist Chris Windom for the first pair of laps.

Following a yellow brought about by a Kyle Cummins spin after contact with Isaac Chapple in a battle for the seventh position, Windom used a massive run on the restart to slide up in front of Meseraull and snare the lead away in turn one, instantly stretching out his lead by the tenth lap as Meseraull and Grant battled for second.


At the feature’s midway point, Schuerenberg and Carson Short fought side-by-side for the fourth position. In turn four, the two made contact, vaulting Short’s right rear over the nose of Schuerenberg’s ride. Short landed on all fours before sliding front-bumper-first into an infield tire marker, stopping him in his tracks. Meanwhile, Schuerenberg was sent into a complete 360 spin, but kept his foot on the gas and continued down the front straightaway as the yellow flew for the stopped car of Short.

“The bottom started going away there,” Schuerenberg recalls. “I whoaed up there too much trying to hit the bottom and I think Carson just had a head of steam. It was one of those racing deals. I don’t think he really meant to do it partially because I slowed down quite a bit trying to hit my marks.”

Schuerenberg restarted fourth with 15 to go, joining Grant and Meseraull in their pursuit of race leader Windom who began to pull away in the latter stages to a one second advantage with a mere 10 laps remaining, but a lap 21 caution bunched up the field at the front of the pack for the ensuing restart.

On this occasion, Windom was unable to break way as Grant challenged low and a surging Schuerenberg ripped the top-side to remain within the shadows of the orange No. 5 that paced the field. Suddenly, though, Windom’s right rear tire appeared to be going flat, but the determination of Windom refused to deflate after both Grant and Schuerenberg completely surrounded him, both low and high, on lap 22.

Grant clawed his way along the bottom of turn three to briefly occupy the top spot, yet Windom was able to duck back under Grant to retain a lead of the narrowest of margins at the stripe. On the 23rd lap, Schuerenberg used the momentum on the cushion to ride his way to the front and, one lap later, Windom’s quest for victory vanished as the tread on his right rear tire gave way, resulting in a yellow with just seven laps to go.

When racing resumed, it was all too clear Schuerenberg was the class of the field on this night as he constructed a lead that grew to nearly two seconds on the final lap to score the win in his Roof Bolt Racing/Eddie Gilstrap Motors – Roof Bolt Xpress/Eagle/Tranter over Grant, Meseraull, Chad Boespflug and Brady Bacon, who earned $700 in cash for the BC Badass Passing Award this weekend courtesy of the Hughes Family and the Indiana Mafia.

Saturday night marked the first USAC victory for the Roof Bolt Racing team and Schuerenberg’s first career USAC victory at Ocala, a place in which he has scored six top-five finishes in his 11 most recent starts at the 3/8-mile D-shaped dirt track.