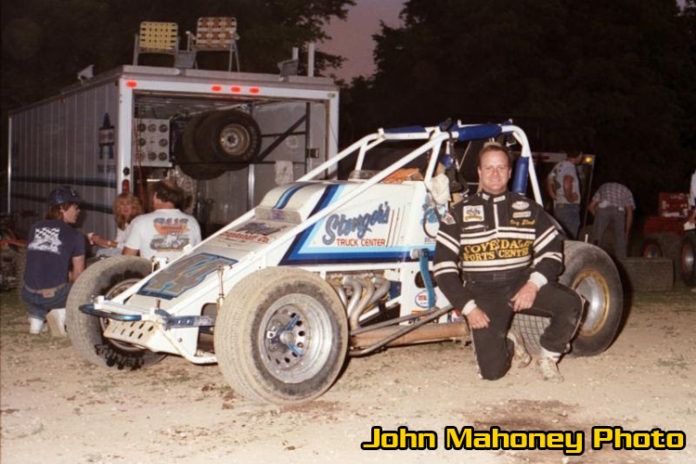 Greg Staab, a beloved figure who wore many hats during his racing career as a driver, car owner, crew chief, mechanic, track promoter and series coordinator, passed away Monday, March 6, 2017 after a battle with cancer. He was 68 years old.

Staab, from Cincinnati, Ohio, piloted car No. 44 for more than two decades on the USAC trail, first in midgets before transitioning to the sprint car full-time. Staab was a regular on USAC’s National Midget circuit from 1972-1979, garnering a career-best series finish of second at Salt Lake City, Utah’s Salt Palace in 1976, but it was in the sprint car where Staab truly flourished.

In a six-year span between 1982 and 1987, Staab won the Lawrenceburg Speedway sprint car track championship five times in addition to a Bloomington Speedway title in 1984! One year after his final ‘Burg championship, in the summer of 1988, Staab captured the most notable victory of his career in an ESPN-televised USAC National Sprint Car race at Indianapolis Raceway Park. Staab, known his for his prowess on the clay, outdueled fellow dirt-tracker Kevin Huntley in the final laps on the asphalt to take his first and only USAC triumph. Ironically, it was Huntley who had denied Staab the Lawrenceburg track championship in 1986.

His driving career ended in his 177th USAC Sprint Car start after an accident at Indiana’s Paragon Speedway in 1996, though Staab remained heavily involved in the sport, fielding cars for drivers such as Joey Kerr, Eric Gordon, Dickie Gaines, Critter Malone, John Heydenreich, Cary Faas, Jason Setser – who won the 2000 Lawrenceburg track championship in his car – among many others. At the same time, Staab had taken over the role as president and promoter of Lawrenceburg Speedway from 1997-2000, and from 2005-2008, served as the coordinator of the USAC National Sprint Car division.


Staab, a Hoosier Auto Racing Fans and Dayton Area Racing Fans club Hall of Famer, kept close ties with the sport in recent years. In 2016, he served as crew chief for Joe Liguori’s Silver Crown team and, just two weeks ago, the yellow No. 44 was in action at “Winter Dirt Games VIII” in Ocala, Fla. with Liguori behind the wheel for the USAC AMSOIL National Sprint Car season openers.

USAC extends its deepest condolences to Staab’s family and numerous friends in the racing community.