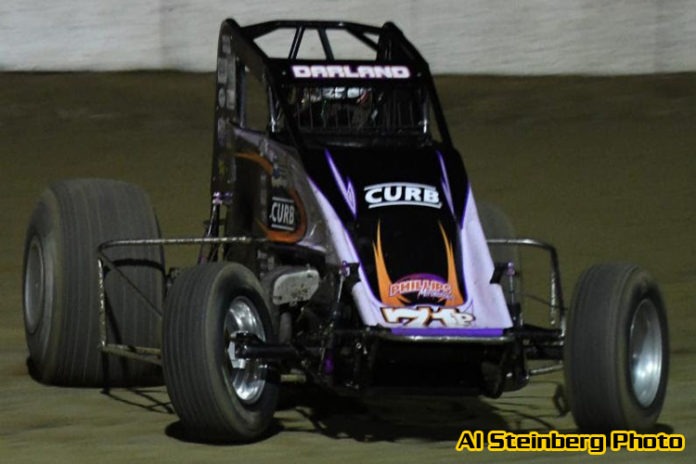 March may have come in like a lion, but the hugely-anticipated month of April truly delivers the roar to the contingent of Midwest fans and drivers who have eagerly awaited this moment for the past six months. It’s the return of USAC AMSOIL National Sprint Car racing to the state of Indiana, which arrives this Saturday night, April 1 at southeastern Indiana’s Lawrenceburg Speedway.

Ione, California’s Justin Grant has been dominant in the early part of the season after picking up the victory in the USAC National Sprint Car opener at “Winter Dirt Games VIII” in Ocala, Florida. He followed that up one night later by finishing second to Hunter Schuerenberg and, by virtue, stands at the top of the series standings heading to the Burg.

Grant’s odds just might be in his favor as two of his five career USAC Sprint wins have come at the high-banked three-eighths-mile oval in Lawrenceburg!

Hanford, California’s Chad Boespflug, the 2011 Lawrenceburg track champion, finished a strong second and fourth in the two Ocala races and sits third in points. Tied for seventh in the series standings are C.J. Leary and Jarett Andretti, who each have a Lawrenceburg track championship under their belt: Leary in 2013 and Andretti in 2016.
Chase Stockon, a Lawrenceburg winner in the fall of 2012, is fourth in the standings. Brady Bacon took the checkered at Lawrenceburg in the summer of 2015 and is fifth in points. Thomas Meseraull, a Burg winner in the fall of 2015, sits sixth while 2010 winner Jerry Coons, Jr. is tied for ninth. Hunter Schuerenberg (second) and Chris Windom (tied for ninth) are each seeking their first USAC win at Lawrenceburg.


In last year’s Midwest opener at Lawrenceburg, it was a war of attrition as car after car fell by the wayside on a chillingly cold and blustery day. But, in the end, the veteran Dave Darland conserved his machine from the wear and tear, surviving the 30-lapper to extend his miraculous streak of USAC National victories to 24 consecutive seasons.

Pit gates open for Lawrenceburg’s season opener at 3pm while the front gates open at 5. Cars hit the track for hot laps at 6pm with opening ceremonies set to get underway at 7. Adult admission is $25. Kids 7-12 are $7. Children 6 and under are free! Pit passes are 30 bucks.