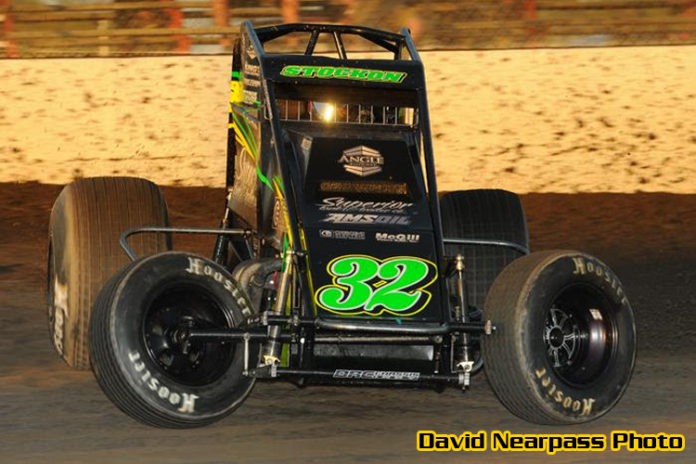 Two of the most popular venues on the USAC AMSOIL Sprint Car National Championship calendar reside in the heart of southern Indiana. Bloomington Speedway’s lush, green hillside provides a welcoming ambience to nearly a century of enthralling racing theater on the quarter-mile oval of radiant red clay. Deeper south is Haubstadt, Indiana’s Tri-State Speedway where crowds come in droves, annually filling up both sides of the racing arena to cheer on their racing heroes.

Coming into this weekend’s USAC National Sprint Car events on Friday, April 14th at Bloomington Speedway and Saturday, April 15th’s “Spring Showdown” at Tri-State Speedway, co-sanctioned by MSCS, only four active drivers have mastered both Bloomington and Haubstadt during their USAC National Sprint Car driving careers. You can count Cullman, Alabama’s Kevin Thomas, Jr. among them. KTJ recently returned to the USAC wars, picking up 8th in his season debut two weekends ago at Lawrenceburg for the Pace Brothers team. The winningest non-wing sprint car driver in the country in 2016 continues to find his stride as, just last weekend, he scored a pair of top-five finishes in a midget at the “Kokomo Grand Prix.”

Sikeston, Missouri’s Hunter Schuerenberg began the year in winning fashion by taking the Saturday night portion of Winter Dirt Games in Ocala, Florida. At Lawrenceburg, Schuerenberg was flat-out fast again until he rode out a harrowing ride while running second.


Though he resides just a stone’s throw away in Bedford, Indiana, Bloomington Speedway has been home-sweet-home to Brady Short over the past decade-plus. Short, a six-time Bloomington Sprint Car track champion earned his first career USAC win there in 2006. Tri-State Speedway has been kind as well to the “Bedford Blaster,” where he captured a pair of USAC National Sprint Car victories in 2015.

Jon Stanbrough needs just one more victory to surpass Rich Vogler for sole possession of 10th place all-time on the USAC National Sprint Car win list. What better place to do it than this coming weekend at Bloomington and Haubstadt? Stanbrough, who announced his intentions to step away from full-time racing at the end of the year, is riding a high after a solid 4th place run at The Burg on the first of April.

Ironically, each of the four drivers have exactly three wins apiece at this weekend’s two tracks, mirroring each other with a single win at Bloomington and a pair of victories at Tri-State. However, there will be a stacked field on hand to disrupt any notions those four have of adding another tally mark to their southern Indiana dirt track scorecard.

They will have to contend with the likes of series point leader Justin Grant of Ione, California, Hanford, California’s Chad Boespflug, who occupies second in the standings, plus additional top-10 points residents Jarett Andretti of Mooresville, North Carolina, Tijeras, New Mexico’s Josh Hodges, Kokomo, Indiana’s Shane Cottle, and Tipp City, Ohio’s Landon Simon, plus a bevy of others who can and will contend this weekend.

USAC National racing is in the midst of a streak of sweeps. Just last weekend, Brady Bacon dominated both nights of the “Kokomo Grand Prix” in a midget and, two weeks ago, Chris Windom began the flourish by winning the National Sprint Car Midwest season opener at Lawrenceburg, then followed that performance one night later with a victory in the Silver Crown series’ “Sumar Classic” at the Terre Haute Action Track.

This weekend provides another opportunity for a Windom sweep. He was a winner at Bloomington in the Spring of 2011, but Tri-State has proved troublesome throughout his career. In 13 starts at the quarter-mile paperclip, he possesses an average finish of 12th. The tide seems to be turning as three of his four most recent starts at Tri-State have resulted in top-10 finishes.

Last April at Bloomington, Bryan Clauson continued his dominance there by leading the final 12 laps to take his fourth-straight USAC National Sprint Car victory at the track. Prior to him, no driver had even won two-straight USAC Sprint races at Bloomington!

One night later, Chase Stockon from nearby Fort Branch, Indiana picked his way past Thomas Meseraull on lap 12, then owned the final 19 laps of the feature for his first USAC triumph at his home track in Haubstadt.

Pit gates for Friday night’s round at Bloomington open at 4:30pm with spectator gates set to open at 5:30pm. Cars are scheduled to hit the track at 6:30pm. All times eastern. Adult general admission is just $20 while children 12 and under are FREE with a paid adult. Pit passes are $30.

Tri-State Speedway’s opening event on Saturday gets underway with ProSource Qualifying at 6:30pm and racing scheduled to begin at 7:30. All times central. Adult general admission is $25. General admission tickets for students age 13-18 are $20. Tickets for kids age 12 and under are FREE.

All around the globe, fans who are unable to make the trek to Bloomington and Tri-State this Friday and Saturday can watch flag-to-flag coverage of each race a day after the event on-demand at http://www.Loudpedal.TV/.