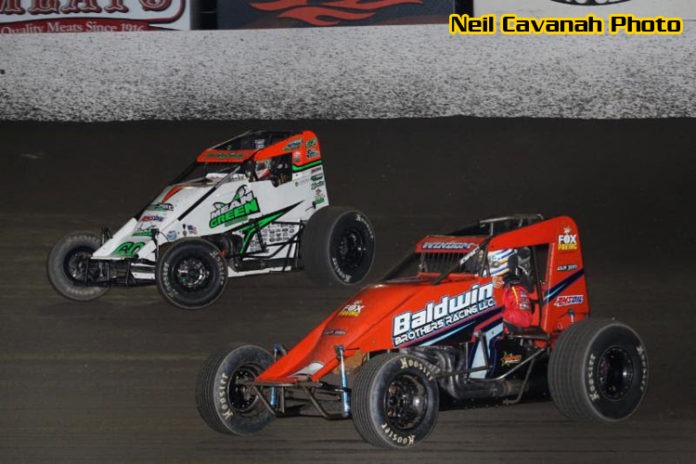 Throughout its history, the United States Auto Club has been a party to a multitude of intense rivalries. None are more revered than the “Gary and Larry Show” that took the USAC Sprint Car division by storm between 1968 to 1971.

In that four-year stretch, Gary Bettenhausen and Larry Dickson dominated the series like never seen before or since. In fact, the duo won nearly half the series races run in that span and took turns alternating series titles, with Larry winning in 1968 and 1970 with Gary taking the crown in 1969 and 1971. Each year that Gary or Larry was the champ, the other finished as runner-up in the standings.

Perhaps there has been no match that compares to the prolonged run of the “Gary and Larry Show” over the past five decades, but this past weekend, this generation’s greatest USAC Sprint Car rivalry was on full display – Chad Boespflug versus Chris Windom.

We were witnesses to the “Chad and Chris Show” in October of 2016 when the two battled lap-after-lap-after-lap, unofficially exchanging the lead an astronomical 26 times in 30 laps at Indiana’s Terre Haute Action Track. Windom had the upper hand on that night when he disposed of Boespflug using a monster run down the back straightaway on lap 28, then fended him off for the final two laps to capture the “Jim Hurtubise Classic.”


If the “Chad and Chris Show” was born that night, that must mean that the rivalry took its first steps and spoke its first words this past weekend at Bloomington and Tri-State Speedways where the two would put on a pair of classic duels that indicate the ringing in of a new era of USAC heroes.

Some say defense wins championships – at least in stick and ball sports – but after seeing his lead slip away on the 22nd lap, Boespflug had to go on the offensive. His opportunity to regroup and recharge came a lap later when third-running Dave Darland blew a left rear tire at the start/finish line.

When action resumed with eight laps remaining, Windom got a solid jump on Boespflug. With seemingly nothing to lose down the stretch, Boespflug attacked the topside and went after Windom, instigating a compelling, hair-raising, wheel-to-wheel showdown in which the two were locked into a non-stop, side-by-side battle.

Little-by-little, Boespflug drew closer and, with only five laps remaining, was side-by-side with the 2016 Silver Crown champ. Lap-after-lap, the two appeared as if they were engaged in a game of slot car racing, both smooth on the rail, running distinctive lines with neither able to budge ahead by much more than a few feet or so at any particular point.

Windom clung to a scant lead at the line time and again, but Boespflug was still wide open on the outside, a move that would pay large dividends as he raced around Windom to grab the lead by inches coming to the white flag.

On the final lap, Windom made one final, last ditch effort, but it wouldn’t be nearly enough as he slid up behind Boespflug off the final corner as Boespflug darted under the checkered flag to take his first victory for the Hoffman family and became the fourth different winner in as many races ahead of Windom and Chase Stockon.

However, an average finish of 12th over 13 career USAC AMSOIL National Sprint Car starts at Tri-State didn’t bode well for Windom’s odds coming into the event at the quarter-mile paperclip in southern Indiana.

But stats are just that. Stats. And the next day always presents the next opportunity for one to make their mark.

Windom would start the 30-lap main event from the outside of the second row, staring directly at the tail tank of Boespflug’s car at the start. And right from the get-go, continuing the previous night’s theme, Boespflug and Windom immediately took ownership of the top-two positions exiting turn two on the opening lap.

On the fourth lap, Windom saw an opening and went for it as he put a slider on Boespflug for the lead entering the first turn. Windom made slight contact as he slid up in front of Boespflug off turn two as they hit the back straight running nose-to-tail.

In a reversal of roles from the night before, Windom took the middle to high route while Boespflug zipped along the bottom. Boespflug unloaded the chamber as he repeatedly fought to reclaim ownership of the top spot, pulling even to the inside of Windom multiple times on both ends of the racetrack.

Boespflug momentarily willed his way to the lead with a turn one slider when action resumed, but Windom, as well as Justin Grant, held the momentum and were able to blast by to take first and second, respectively as they hit turn three. Although, Grant’s newfound position would be short-lived as Boespflug snuck back underneath for second when Grant drifted high.

After Donny Brackett walked away from a harrowing lap nine barrel-roll, Boespflug consistently poked his nose under Windom through much of the middle stage of the race. Every single time, Windom’s drive off the second and fourth corners was adequate to hold Boespflug at bay.

Boespflug closed on Windom with 12 to go when Windom met up with a logjam of lapped cars. Windom was forced to alter his line to the bottom, allowing Boespflug to peel away several layers of Windom’s one-plus second lead over the next eight laps, to less than a half-second.

When third-running Kyle Cummins’ car went up in smoke on lap 27, collecting Hunter Schuerenberg and Isaac Chapple in the process, Windom was up to the challenge, mastering the course as he bolted away from Boespflug on a restart with four laps to go and was on his way to a surefire victory.

However, a Landon Simon and Brandon Morin turn three tangle would set up yet another stress test for Windom to endure – a one-lap free-for-all between he and Boespflug for the win!

Once again, though, Windom answered the bell when he stood on the loudpedal and passed under Tom Hansing’s green and white flags on the lap 30 restart. Distancing himself to a half-second advantage, Windom passed the exam with flying colors to become the first repeat winner on the USAC National Sprint Car tour in 2017 over Boespflug and Grant.

Those same three occupy the top three spots in the latest standings as well. Grant and Boespflug have yet to finish outside the top-four positions in any of the five races, and are separated by just two points entering next week’s double-dip at Indiana’s Plymouth and Montpelier Motor Speedways. The surging Chris Windom is now third in front of Chase Stockon and Jarett Andretti.