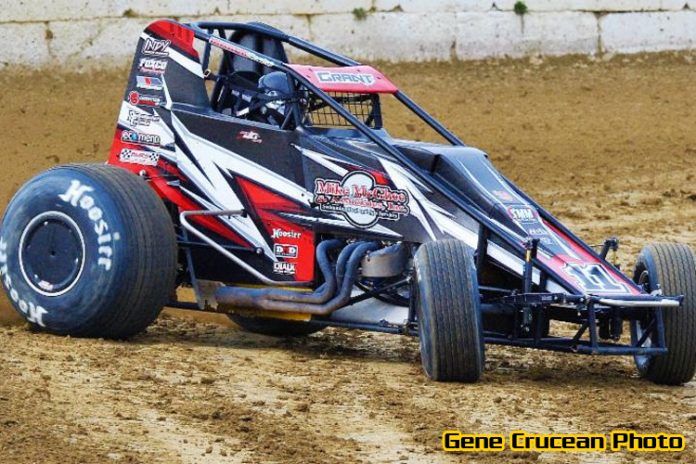 Since Justin Grant and Sam McGhee Motorsports joined up in August of 2016, the pair has seen their level of success soar to a new stratosphere.

When the two knocked down a non-sanctioned win in their first race together at Bloomington Speedway eight months ago, then followed it up with two-straight top-three finishes at the Badlands, you just had the feeling this was a dream pairing in the making.

When their formation resulted in a dominating performance at Eldora Speedway’s “4-Crown Nationals” last September, you just knew this dream was becoming a reality.


In the 16 USAC AMSOIL National Sprint Car starts the 26-year-old Grant and McGhee, the 17-year-old mechanical prodigy, have teamed up, they’ve earned an average finish of 3.7. This year alone, that average has peaked to its current 2.3 through six starts, which includes a season-opening victory at “Winter Dirt Games” in Ocala, Florida.

Without a single finish outside the top-four and no signs of letting up just yet, 2017 has thus far been a season that could turn out to be simply magical. The magic continued Friday night at northern Indiana’s Plymouth Speedway where the USAC National Sprint Cars made their first ever pilgrimage.

Early on in a downright chilly and wind-soaked evening, Grant’s run of success took on a bit of a turn for the worse on his ProSource Qualifying run when he stumbled in turn four coming to the green. He took a mulligan, turning it around before giving lap number a second shot. In turn three, he proceeded to almost dump it before setting it down and going on to salvage a respectable eighth on his second go-around.

Two top-six qualifiers missed the invert by not transferring through their heat, providing Grant a seat on the outside of the front row, which he took full advantage of by racing to the lead up top as polesitter Thomas Meseraull slid up the track in turn two. That allowed Grant to breakaway to a substantial advantage right off the bat.

By lap three, Grant was ahead by a half-straight. By lap five, the lead was a full-straightaway. And 10 laps into the 30-lapper, Grant had packed his suitcase, bought an airline ticket and checked out to a staggering half-lap lead as he began to negotiate lapped traffic.

Though he possessed a suffocating stranglehold on all those who followed, Grant’s lead would begin to shrink mightily through the second half of the event as the lappers ran high, low, top and bottom as they engaged in their own battles for position ahead of Grant.

Each lap, Boespflug chomped a significant chunk out of the interval between he and race leader Grant. With six laps remaining, Boespflug pulled even with Grant in turn one. The two Californians were separated by a single car length as they battled down the back straight with the lapped car of Aaron Pierce just in front of them. Grant decided this was the time to get aggressive and took a chance, splitting between Pierce and Jarett Andretti to separate himself for good.

Meanwhile, 18th starting Tyler Courtney seemingly came out of nowhere, shooting around the top to zip by Thomas Meseraull for third with 3 laps remaining and ran down Boespflug on the white flag lap with a sweet outside, inside move off the second turn, beating him to turn three to grab the second position.

By then, though, Grant was long gone once again where he would pull away for a commanding three-and-a-half second victory over KSE Racing Products Hard Charger Tyler Courtney and Chad Boespflug.

Grant established the 30-lap mark in caution-free fashion at 7 minutes, 36 seconds in a race that saw all 22 starters finish.

Additionally, team owner Sam McGhee revisited Plymouth Speedway victory lane for the first time in six seasons, but this time, in a different role. The now 17-year-old McGhee raced to a USAC Ford Focus Young Guns Midget feature at Plymouth in 2011 when the track was pavement.

Justin Grant remains at the top of the standings after winning his second series feature of the season. Yet, Chad Boespflug actually closed the gap to a single point after collecting valuable ProSource Qualifying and Heat Race points throughout the night. Chris Windom remains third ahead of Chase Stockon and Jarett Andretti.