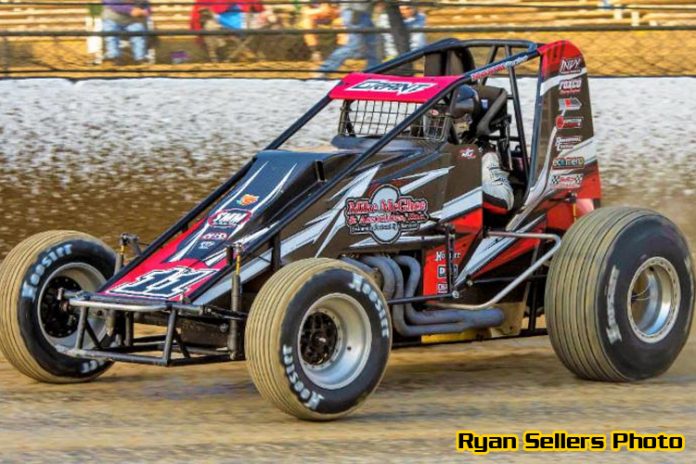 On Friday’s night one of #LetsRaceTwo, the two showed that the magic touch from eight months ago at the Big E has no signs of wearing off as they raced to their second USAC victory in as many tries at the western Ohio dirt oval.

It was the third series victory for driver Justin Grant in 2017 after a season-opening triumph in Ocala, Florida and an April score in Plymouth, Indiana in the Sam McGhee/Mike McGhee & Associates – Brown & Miller Racing Solutions/Maxim/Foxco. It was also the third career Eldora victory for Grant, a driver who is quick to pass the credit for his prowess at Eldora to the 17-year-old McGhee who turns the wrenches on the No. 11.


“I’ve got Sammy (McGhee). That’s what I’ve figured out about this place,” Grant exclaimed. “I can’t say enough about this crew and this racecar. They all work their tails off and they do a heck of a job. It’s an amazing car to drive.”

Yet, in humble fashion, McGhee instantly identifies Grant’s communication and detail-oriented style as the staple of their success, which has yet to see a finish outside the top-four in a USAC race this season for the series point leaders.

“It’s all about being able to read the track and know exactly what your driver likes and dislikes,” McGhee believes. “That’s so important here at a place like Eldora where you carry so much speed. Justin is very detailed in communicating to me what he needs to get to the front. We’ve been clicking because we’re both young, passionate about what we do and have a mutual respect. That’s translated into the success we’ve had since we teamed up last season.”

Grant began the 30-lap event from the fifth position as polesitter Kevin Thomas, Jr. sprinted to the lead at the drop of the green with Chris Windom and Chad Boespflug in tow.

An incident involving Corey Smith and Nick Bilbee in turn one on the third lap would prove to be the first, and only, stoppage of the night. When racing resumed, an intense, unwavering early-race battle at the front of the pack would ensue involving Thomas, Windom and Boespflug.

Windom began to apply pressure to Thomas for the top spot by lap seven, but soon, a train that included Grant and 11th starting Shane Cottle gassed their way to the front with race leader Thomas just within reach.

Grant closed to the tail of Thomas’ tail tank by lap 10 and used a patented Eldora slider in turn three to rip the lead away as Thomas countered underneath. In a drag race to the line, Grant held the advantage by a single wheel. Thomas charged right back at Grant after getting a run on the bottom of turn three, but Grant denied the anticipated Thomas’ slider after switching to the low line to momentarily ward off the challenge.

Meanwhile, Cottle was a man on a mission using the middle to low line to close on race leader Grant by the midway point while Thomas and Windom found their second wind and began to reel the leaders back in on the high side.

On the 18th lap, Cottle got a big run on Grant on the bottom of turn one, but Grant slammed the door to fend off the veteran driver who was seeking his very first Eldora USAC win. Grant acknowledges it was a move out of necessity because the bottom was the place to be at that point in the race, but not one that he normally would give a try.

“There’s quite a bit of risk to it,” Grant acknowledged. “Normally, I’m not one to do that. Not because I have any moral objections to it, but I’m usually just not very good at it. I could tell (Shane) Cottle was working me up off the bottom. The top was still really dirty off (turn) two and there wasn’t a cushion to find yet. I fired off one lap onto the bottom and figured if it’s not good, I’ll just run a slider on myself and get back to the cushion off (turn) two. It stuck and drove off turn two, so I thought ‘Well, okay. That was pretty good.’

Cottle refused to fade away and came back at Grant with 10 laps remaining, engaging in a side-by-side battle for the lead that now saw mid-field starters Thomas Meseraull and Dallas Hewitt enter the top-five. Lap-after-lap, the contentious scramble for position was uncertain with the top-five participating in a scramble for position that appeared as if it were a restrictor plate race at Talladega.

Grant moved back to the top in the final stages as Hewitt found a little magic of his own, slicing through the middle to third and, with four laps remaining, sliding across the front bumper of Thomas to grab second.

It was now a two-man trophy-dash between Grant and Hewitt for the win. On laps 28 and 29, Hewitt made up ground off of turn two to pull himself within the shadows of Grant. Yet, Grant played a little more defense as the sound of Hewitt’s engine was within earshot and denied Hewitt any notion of claiming the position.

On the final lap, Hewitt made one final go of it, lifting the left rear entering turn one as he kept Grant within sight. But, Grant was out of reach, holding off a torrid charge by a bevy of competitors in the second-half of the 30-lapper to score his second-straight Eldora USAC National Sprint Car victory over Hewitt, Thomas, KSE Racing Products Hard Charger Chase Stockon (from 21st) and Meseraull.

In a topsy-turvy race that seemingly witnessed every position behind him change lap-by-lap, Grant avoided every bullet that was aimed at him, never relinquishing his lead as he maintained control for the final 21 laps. The Ione, California native used a mixture of his own experience as well as what he’s learned over the years at Eldora watching how other savvy veterans got the job done.

“If a guy wouldn’t get all the way to the cushion, we’d drive around him. If a guy would get to the cushion, we’d slide him,” Grant explained. “I was able to pick and choose my lines and, when I caught a guy, I’d just go where he wasn’t. We kept getting pressured near the end and, as thin as the cushion was against the fence, I was just trying not to beat myself. When someone would get under me and pressure me, I’d step it up. Then, it would get quiet and I’d settle back down. I was trying to run only as hard as I had to.”

“I started doing the big slide off turn three and catching the cushion off turn four,” Grant continued. “Tracy (Hines) used to be good at that here when it would get slick. After watching him do that for years, I figured I’d give that a try since there wasn’t much getting into turn three. I started hearing guys and began to get pressure getting into turn three again and I could tell the bottom in turns one and two was slowing down. I was already thinking in my mind, ‘Okay, I’m going to move back to the top as soon as I start getting some pressure.’ I felt the pressure and got back to the top. After a few laps, I felt like I got away from them a bit. Then they came back and got to me again! I knew I had to step it up and I started blocking sliders in three. I just tried to run a smart race and be in the right lane and not beat myself.”

Grant is a driver who likes to be spectacular, running the high-line that gets the highlights and sells t-shirts, but on this night, it didn’t matter to him where he ran. All that mattered was getting the “W” and picking up the check for him and his team in victory lane.

“As I’m running around the bottom of turns one and two, I was thinking, ‘Man, I want somebody to drive by me off the top of turn two so I could just be done down here,” Grant said with a laugh. “As much as I rant and rave about running the bottom at Eldora, I would’ve never heard the end of it if I had won a race on the bottom. It pays the same, but it’s just not nearly as cool.”

The Hewitt name is synonymous with Eldora Speedway due to Jack’s all-time record of 24 USAC victories at the joint. On Friday night, Troy, Ohio’s Dallas Hewitt nearly pulled off the first Hewitt victory at the track since his uncle Jack’s “4-Crown Nationals” sweep in 1998. After kissing the concrete early in the feature, Hewitt recovered mightily, coming oh-so-close to his first career USAC victory, taking home second in his Kaser-Seeling Motorsports/Larry’s Electric – Lone Star Pawn Shop/Eagle/Kistler.

“I had a good run on Justin (Grant) there toward the end, but I think he might’ve heard me,” Hewitt suspected. “He kind of came down on me a little bit more than he was running the laps before. I could’ve been a little meaner and maybe gave him a wheel coming off turn four, but it was a good clean race and I’ll take a second at a USAC race at Eldora any day. We’ve been so close here so many times. We junked our other car at Lawrenceburg a few weeks ago, so we just threw this one together. It isn’t the prettiest piece, but it gets the job done.”

“For me to run the top 30 laps here is nothing short of a miracle,” Thomas deadpanned. “I’m just pumped to be up here. I really wanted that win, though. I don’t get to start up front very much, so I wanted to capitalize on it.