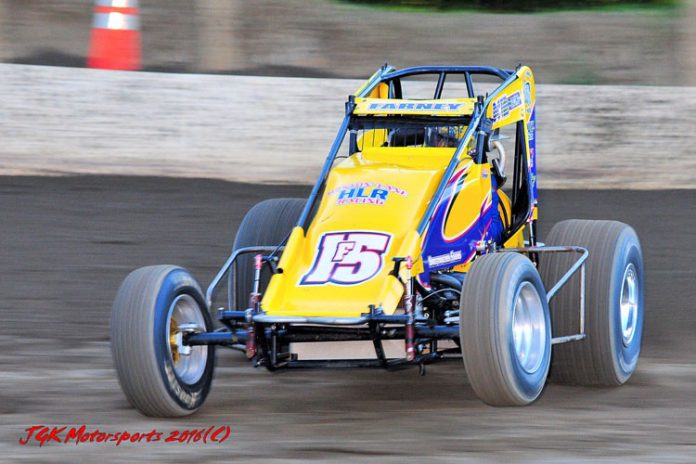 We’re just days away from the arrival of USAC drivers from California to Pennsylvania, heading east to open the 11th Annual Eastern Storm, getting underway at the NAPA Auto Parts Thunder on the Hill Racing Series event at the Grandview Speedway on Tuesday night, June 13. The following night, Lincoln Speedway in Abbottstown, PA will showcase this traveling series of non-wing 410 sprint cars joined by the 358 wing sprint cars. Both nights of racing will get underway at 7:30 PM.

The Eastern Storm will continue on Thursday night, June 15 at Williams Grove then close out the weekend on Saturday night, June 17 at Port Royal and Sunday night, June 18 at the Susquehanna Speedway. This will mark the eleventh annual swing of USAC here in the east, a tour organized by local special events organizer Bob Miller.

Nationally known drivers from numerous states are heading east for this five race series offering over $135,000 in prize money. Many of these drivers are heading to town with a nickname attached to them for one reason or another. But what do these nicknames tell us about these drivers?

We can start with Chris Windom from Canton, IL who is known as “The Bear”. There is also Robert Ballou from Rocklin, CA who earned the nickname “The Madman”, certainly explainable if you watched him power his way through Pennsylvania on previous Eastern Storms. One other point, Ballou sustained injuries last year in a crash that put him on the sidelines the balance of the year. In just his second start since the crash, “The Madman” was a feature winner. Is that mad or what?

Carmen Perigo of Stoystown, PA is labeled with, “Wind it Up and Watch Him Go”, not much to explain on this one. Now a little more interesting is Tyler Courtney of Indianapolis, IN who is known as “Sunshine”. What’s the story on that one?

Driver’s names also have something to do with those labels or nicknames. For example, Thomas Meseraull of San Jose, CA goes by “T-Mez”, the very popular Jerry Coons, Jr of Tucson, AZ known as “Coon Dog” as Kevin Thomas Jr of Cullman, AL goes by “KTJ”.

Perhaps your hometown has something to do with your nickname, like Chad Boespflug of Hanford, CA. Chad is well recognized as the “Hanford Hornet”, known for stinging the competition and stirring a buzz with the crowd. There is also Tony Dimattia of Malvern, PA, known as the “Malvern Missile”.

Now there are still two drivers that you might want to ask about their nicknames. First, Brady Bacon of Broken Arrow, CA who goes by, “The Macho Man” and local favorite Danny Dietrich is “Double D”. How did those nicknames come about?

Last but certainly not least, one of the most recognized USAC drivers, Dave Darland of Lincoln, IN was named by the race fans, “The People’s Champ”.

The Amsoil USAC Non-Wing Sprints Eastern Storm will open at the Grandview Speedway on Tuesday, June 13. This will also mark the opening event of the NAPA Auto Parts Thunder on the Hill Racing Series presented by Pioneer Pole Buildings. If you have never seen a non-wing 410 sprint car race (especially at Grandview Speedway) this is the show to see.

The Tuesday, June 13 event at Grandview Speedway will get underway at 7:30 PM. Joining the USAC non-wing sprints on the program will be the 358 Modifieds chasing a $3,000 payday for the 30 lap run. Craig VonDohren, Duane Howard, Jeff Strunk, Ryan Godown, Billy Pauch Jr., Ryan Watt, Rick Laubach and Frank Cozze, are some of the expected modified entries. Qualifying will take place for both divisions.

Other USAC entries to expect include Fort Branch, Indiana’s Chase Stockon, Kokomo, IN driver Shane Cottle, Sikeston, MO favorite Hunter Schuerenberg, and Landon Simon of Tipp City Ohio. I’m sure we all remember the 2016 Grandview performance by Mooresville, North Carolina’s driver Jarett Andretti, almost taking the win. Tyler Courtney of Indianapolis, IN, and Greenfield, IN driver C.J. Leary are hoping to break through for an Eastern Storm taste of victory.

On the local scene, Danny Dietrich a 410 sprint car feature winner at Grandview and the winner of the 2016 National Open at Williams Grove, plans to make his initial foray into USAC for Eastern Storm on the “hill” at Grandview. Defending ARDC Midget champion and 2016 Chili Bowl Midget Nationals preliminary feature winner Alex Bright, is a regular in USAC’s midget division, and will try his hand for the first time in a USAC Sprint Car.