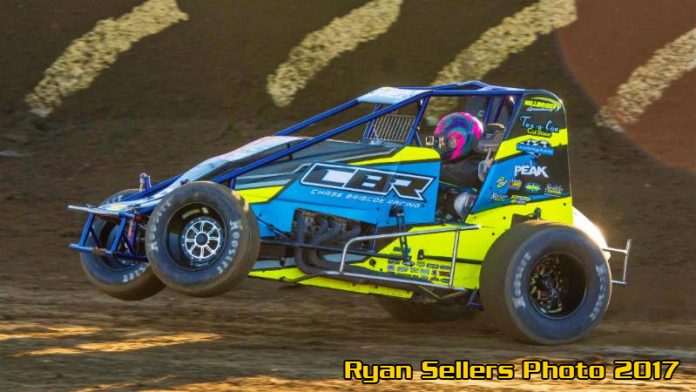 By: Richie Murray – USAC Media
Kokomo, Indiana – It doesn’t seem to matter to Thomas Meseraull one iota which car he’s in this season. More than likely, he’s going to put it in a position to win.
Thus far in 2017, the San Jose, California driver had already taken the Rick Pollock #21x, SC Racing #9x, SC Racing #00 and the Heffner Racing #27 to top-five finishes with the series. It took two USAC starts for Meseraull to reach victory lane for Heffner at Lincoln Speedway’s Eastern Storm stop in June. It took even less time for him to win his first USAC feature aboard Chase Briscoe Racing’s No. 5B, which he did Saturdaynight in the opening round of the 30th Annual Indiana Sprint Week presented by Camping World.
For the high-majority of drivers, the transition to a new team takes some time to jell. There is a familiarity phase to endure in which both driver and crew chief have to discover each other’s likes, dislikes and tendencies. There is no waiting room or grace period for Meseraull when he lands a new ride. He immediately puts the car up front, something he’s now done for the sixth time in his USAC career.
“I’m fortunate enough that the new cars I’ve been hopping into lately are top-of-the-line,” Meseraull praises. “(The Heffner No. 27) was a brand-new car, had brand-new parts and a fresh motor. Now I get to Chase Briscoe Racing and they built a new car, brand-new motor, rear end, wheels, tires, front end and shocks. I’m actually using the shocks from the 27-car because they felt so good. That makes jumping from one car to the other so much easier. You have to trust the shocks you’re running. I got to run those in Pennsylvania. It was a no-brainer. I called (Heffner crew chief) Sean Michael and was like, ‘Hey, I need to get those shocks. That car’s just sitting there.’ When you build brand new stuff, if it’s not fast it’s you. Obviously, you have to get adapted to it. I mounted my seat the same in both cars. The holes from the 27-car line right up in this 5-car. It almost felt like the same ride.”
Minus a turn two, lap one tangle involving Aaron Farney, Josh Hodges and Hunter Schuerenberg, the 30-lap feature went non-stop, green-to-checkered with 2016 Tri-State Indiana Sprint Week winner Carson Short leading the charge on the opening lap after sliding up to the cushion in front of fellow front row starter Ryan Bernal to take the position which he’d hold for the opening nine laps.
Meanwhile, seventh-starting Meseraull was on a tear, picking up three positions on the opening lap and two more on the second circuit to pull to the runner-up spot early in the going.
On the eighth lap, Short found himself slideways at the exit of turn four as Meseraull drew near to the inside. Meseraull dove low, narrowly missing the lead by inches at the line, but set himself up for a big slider on Short for the lead entering turn one.
“He got a little bit hung off four,” Meseraull recalls. “You have to capitalize when guys make little mistakes. You have to go for it, but you got to be close enough to go for it and we were.”
“If I’m catching you down the straightaway and I’m within a couple car lengths, I’m going to throw a slider, especially when the track’s around the top,” Meseraull continued. “I saw an opening and just kind of went for it and hoped, at the end of the night, that he wasn’t going to be mad at me about it.”
“There was a cushion all the way down the straightaway,” Short points out. “As soon as I tapped that, it shot me off. (Meseraull) surprised me when he took it in there, but I know T-Mez. He wasn’t going to stop. He’s coming in there for the win.”
Meseraull set a torrid pace as he tried to maneuver his way through gridlock at the tail end of the field, but there was no such luck initially, providing Short a glimmer of hope as he kept Meseraull within earshot.
“I was watching his line,” Short explains. “Coming into (turn) three, he would almost slow down more in order to go faster coming off (turn) four. Once I started doing that, I felt like I was able to reel him in. I got hung up behind (a lapped car). We kept, I would say, a five-car length distance between each other. I would love to say that I could’ve caught him, but I don’t really think I could’ve. I had nothing for that 5-car. It was definitely moving.”
In time, Meseraull was able to make some headway as he split between multiple cars, including right through the middle of Kody Swanson and Schuerenberg, with eight laps remaining to achieve a bit of separation from Short as the laps wound down. Mostly, though, Meseraull ripped the top up above the cushion where few souls brave.

“I was running that line in the B-Main,” Meseraull recalls. “(Crew Chief) Kevin (Briscoe) said, ‘You think we could pull the right rear in and you could still run above the cushion?’ I was a little worried about it, but you know, if you’re the fastest car in the beginning, not usually are you the fastest car in the end. We took a gamble and pulled the right rear wheel in and just went for it. We were starting a little bit deep and you have to be good if you want to go forward. The car was really on kill tonight.”