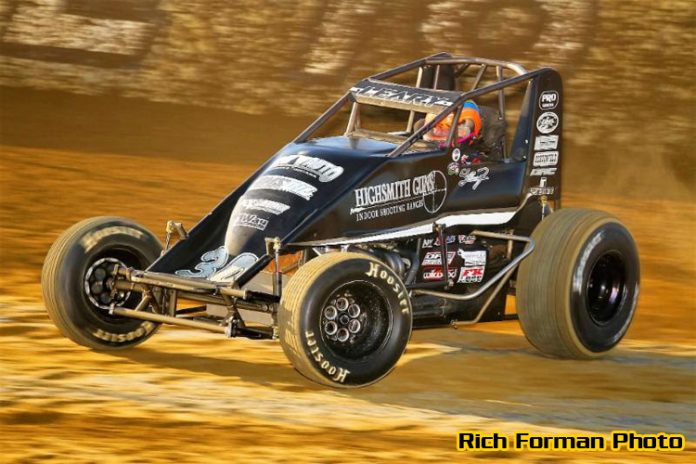 LAWRENCEBURG, IN – C.J. Leary will be the first to tell you how difficult it is to win a USAC AMSOIL National Sprint Car feature. It requires a number of things to line up accordingly leading up to the event and, throughout the night, it takes a combination of skill and even good fortune to have a good run, let alone a winning performance at night’s end.

It took 140 long nights to get the elusive first USAC Sprint win last August, but only 28 to earn his second Sunday night in round two of Indiana Sprint Week presented by Camping World at Lawrenceburg Speedway.

However, the drought seemed more prolonged in Leary’s eyes as good fortune seemed to elude him regularly this season. Mired back in eighth in the standings and sans a victory throughout the first half of the season, the team thrashed to find the right combination that would pay dividends for them in the immediate future.

“It’s been a real trying season,” Leary admits. “All year, if it wasn’t for bad luck, we’d have no luck at all. We kept trying different stuff and nothing seemed to be working.”

Prior to Sprint Week, however, the Leary’s made a few changes to the puzzle pieces that make up the core of the team. There were adjustments made to the shock package and the installation of a new engine, but the biggest change was a switch on the one turning the wrenches. Enter Donnie Gentry as the new crew chief, the very same individual C.J. had in his corner when he drove Shane Wade’s No. 66 to his career USAC Sprint win at Kokomo Speedway’s “Sprint Car Smackdown” 11 months ago.

“Donnie and I had some chemistry last year when we won at the Smackdown together,” Leary recalls. “What he does with the racecar works really well with my style. This is one of my best racetracks and Donnie’s got a really good setup for it. The biggest key of the night, though, was qualifying up front and getting track position against the best racecars and the best drivers in the country.”

Leary’s third-place qualifying time was his best run since Eldora in early May, setting him up for a spot on the outside of row two for the start of the 30-lapper. Initially, though, it was Brady Bacon who held down the position on the opening laps as he rode the rim around the outside of pole-sitter Hunter Schuerenberg in turns one and two.

By lap three, Leary, the 2013 Lawrenceburg track champion, was eager to pounce as he slid Bacon for the point at the entrance to turn one. Bacon quickly counterpunched, ducking low to retake the lead as the two hustled down the back straightaway. But that would only prove to be a momentary maneuver as Leary entered the ring once again, ripping the outside between turns three and four to blast around Bacon for the lead exiting the fourth corner to turn the tables – no microphone needed – from the occurrences at the recent “Eastern Storm” stop at Pennsylvania’s Grandview Speedway.

Leary’s 2017 misfortunes reached a high-water mark in that June event in which a lapped car disrupted his line entering turn one three laps from the end, thus concluding his bid for victory that night after a stirring late-race drive on the high side to rip the lead away from Bacon.

“I’ve won eight races here at Lawrenceburg in the past,” Leary points out. “We kind of got the set up down and we kind of know what the racetrack’s going to do. After the heat race, we just knew it was going back to being classic Lawrenceburg, right against the fence with big sliders. That’s right up my alley. Passing Bacon early was key before the track went completely slick and we were all running about the same speed at the end.”

The Greenfield, Indiana driver was hellbent on avoiding that situation this time around as he absolutely hammered the field for the next several laps. He continued to wreak havoc on the competition even as he began to encounter lapped traffic, constructing a full-straightaway lead on the high-banked half-mile dirt oval when the night’s only caution fell on lap 13 for a loose infield tire that successfully rolled its away from the exit of turn four to the entrance of turn one after being clipped and dislodged by a car.

Leary seemed to be synched in rhythm while the remainder of the field sang the blues, but the 21-year-old who paints water towers for a living with the family business, wasn’t too bent out of shape when he saw yellow.

“The yellow actually helped bail me out of heavy lapped traffic,” Leary said. “It put me back in the clear air and allowed me to pull away a little bit on the restart. I got a little bit of a lead and was able to ride in traffic, so I didn’t have to push it too hard. I think if we would have had another yellow somewhere along the way, it would’ve been the same result.”

Leary’s large lead was gone, but so was lapped traffic and so was Leary as he instantly reestablished his full-straightaway, 3.5 second lead with just 10 laps remaining. But, just as things seemed well in hand, lady bad luck was leering in the second turn as Leary worked his way through the back of the field. Previous night’s Kokomo fifth-place finisher Kyle Cummins was next on Leary’s radar when he bounced hard off the turn two concrete and gathered to remain control just as Leary was clamping down on him to put him a lap down.

“It happened right in front of me,” Leary remembers. “I was really worried he was going to chock it down or just come right down in front of me. I was hoping to get by him when he did that, but I had to take an extra lap to get back around him.”

Luckily, for both Leary and Cummins, it was a case of “no harm, no foul” and both continued without issue. Thirty laps seem so short on paper, but anything and everything can happen in such a small window of time. Leary was wary of that and he wasn’t going to allow that to faze him on this occasion.

“I’ve led a lot a lot of races, but I’ve given plenty away,” Leary acknowledges. “Three or four or five of them, I can’t even remember now. It’s been so many. I caught lapped traffic and it was tough because everyone’s so fast. I had been leading and hadn’t heard anybody or seen anybody. Right there at the end with five to go, I was on Carson Short’s tail and I couldn’t get around him. Lapped traffic was thick on the top and bottom and I finally just drove it in there, but I wasn’t completely sure how hard I had to push the racecar at the end.”

Everything seemed well in hand coming off the final corner on the final lap, but there was one last scare for good measure that Leary chalks up to a simple racing deal. Carson Short and Jon Stanbrough were racing for the 16th position heading to the stripe just as Leary came off turn four to take the checkered flag. Short occupied the bottom and Stanbrough the middle right at the line as Leary barely squeezed by on the outside of both between Stanbrough’s right side wheels and the wall. Leary and Stanbrough banged wheels, but fortunately for both, crisis was averted and Leary was able to celebrate his second career USAC National Sprint Car victory and his first in Indiana Sprint Week.

“He actually came up higher than I expected him to,” Leary said. “I thought he might be able to see me up there because I had been next to him a couple laps in a row. They both went to bottom on the last lap and I figured he knew I was going to be up there. But it’s just a racing deal. He didn’t mean it by any means. I’m just lucky enough I had a good lead and I was just glad I didn’t tear up the racecar because it’s really fast this week!”

To Leary, his first series win a year ago was one of the most memorable nights of his career. Yet, winning in the family-owned number 30 is at another level of special significance after he and his dad, Chuck, have sacrificed and endured long days and nights of frustration to finally get the Leary Racing/Leary Construction – Highsmith Guns/DRC/1-Way Chevy to victory lane.

“Winning in Shane Wade’s car was awesome, especially because it was my first and it was at the Smackdown, another really competitive event,” Leary acknowledges. “Dad and I work our butts off all week, every week just so we can get to the racetrack. My mom and dad, we all come to the track together as a family. Picking up a win here tonight is so special for Dad and I both. Mom couldn’t make it here tonight. She stayed at home since she wasn’t feeling so hot. But all the time and hard work that goes into these racecars makes it all worthwhile and so rewarding. To pick up an Indiana Sprint Week win means the world to me. We’ve dreamed of winning these races, and to do it as a family at Lawrenceburg, there’s isn’t anything more fitting than that.”

After a third-place run the night before, Brady Bacon of Broken Arrow, Oklahoma snared a strong runner-up finish after leading the first two laps at Lawrenceburg in his Dooling-Hayward/B & H Contractors – Dooling Machine/Spike/Stanton Mopar.

“I finally caught the invert right tonight,” a relieved Bacon said. “C.J. was just better than us. No one was going to stop him tonight. I was hoping that, maybe, the top would go away and we’d be able to catch him that way, but it didn’t and, sometimes, that’s the way it goes. He was just really, really fast tonight.”

“Last night, I kind of got caught behind the eight ball as a driver,” Thomas recalls. “I didn’t keep up with the track. I think we did a much better job of that tonight. We made the right changes on the racecar. I didn’t really prefer to start that far back in the feature, so we had to pass some good cars. It’s a long, tough week. To knock off a podium finish this early is good for morale. Things can go so well one night and bad the next. We didn’t have the finish we wanted last night, but tonight shows that if everybody works hard and makes a good, fast racecar, you can bounce back and have a night like we did tonight.” 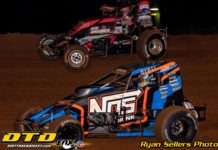