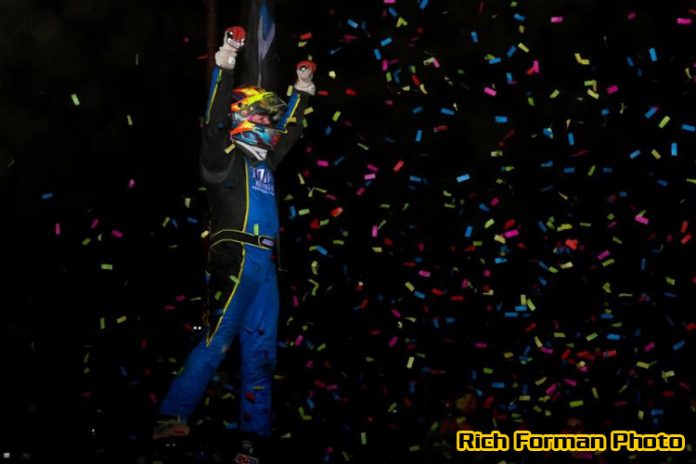 MOBERLY, MO – Over the course of 140-plus years of Major League Baseball, there’ve been 23 different pitchers who’ve thrown a perfect game. The perfect 300 bowling game is celebrated as one of the highest achievements in all of sport. A few times per year, you’ll hear of an NFL quarterback who scored a perfect 158.3 rating.

Less heralded is the perfect race. There’s so many variables, obstacles and outside influences in auto racing that can play interference on each corner and each lap, it’s nearly impossible to accomplish. Plus, in auto racing, there are no points systems or judges to determine what a “perfect” score is.

In a 30-lap USAC AMSOIL National Sprint Car race, perfection is an expectation. On Sunday night in the series’ first trip to Randolph County Raceway since 1989, Tyler Courtney was just about as perfect as you can be, staving off pressure from Brady Bacon down the stretch to win his third series feature of the year.

“Racing with the guys we race with night-in and night-out, you’ve got to be perfect for 30 laps,” Courtney explained. “I was able to minimize mistakes tonight. When you’re on the pole, you’re the guy being chased. You have to put that in the back of your mind and go out and run your race and put 30 laps together.”


It was a treacherous beginning at the front as pole sitter Courtney gained the initial advantage running the high line. Inside second row starter Chris Windom pulled into second and dove to the bottom in turn three, momentarily holding onto a one car length lead when his orange No. 5 biked on entry, then landed on all fours before digging in on the left rear and barrel-rolling three-and-a-half times over the concrete wall. Fortunately, Windom was able to climb from the car and walk away from the scene uninjured, but the incident certainly proved detrimental to his championship hopes with a 20th place result.

“That was my original plan and I stuck to it for as long as I could until I felt like I had to change,” Courtney admitted. “Once I saw the start of Chris’s flip, I knew there had to be something evil down there. All night, the top of (turns) three and four had been really fast and we were able to carry our momentum. One and two was kind of a crap shoot. You had to move around a little bit and I knew the bottom was going to be good for a while with the kind of moisture that was down there. I ran down there in one and two for a while and saw Brady (Bacon) challenge me in (turns) three and four, so I changed it up and went to the top in one and two and was able to pull away from him a bit”

As Courtney maintained a roughly eight-car-length advantage by the fifth lap, second-running Leary tested the waters on the bottom of turn three himself when setting up a slider on Courtney for the lead. Similarly to Windom, Leary biked, but was able to gather it up and continue on. That opened the door for Saturday night Lakeside winner Brady Bacon to pounce and he momentarily grabbed second from Leary at the line. Leary regained his grip and hit the top once again in turns one and two to race back around Bacon to regain the second spot.

As the leaders worked their way through lapped traffic on the 11th lap, Leary got hung up behind a lapper and dove low into turn three to get by, but Bacon saw an opening and was able to do the Limbo Rock even lower than Leary to take second. Though, unlike a few others, Bacon’s maneuver against the inside wall of turn three looked smooth as silk, but it wasn’t as easy as he made it look.

“The car was tightened up to run the top of the racetrack, but the way the transition of the banking is down on the bottom, it would slam you right into that banking and it would upset your car,” Bacon explained.

Following a restart just prior to the halfway mark, Bacon was able to take a peek underneath Courtney for the race lead heading into turn three, to no avail. Courtney took note and altered his game plan.

“I made a couple of adjustments on the shocks and moved my line to the top of one and two and started doing a little diamond move,” Courtney detailed. “Once I felt like there wasn’t any pressure, I still kept doing what I was doing and had to really pay attention to the noises around me. You always have to be looking ahead of you, though. There was a lot of lapped traffic tonight, but it’s how these races go. You’re racing against professional racecar drivers like Brady who run 100 races a year in every type of car. He sees a lot night-in, night-out.”

Down the stretch, Courtney and Bacon encountered numerous lapped cars, but each time, the pair escaped without issue. With two laps remaining, though, 13th running Rob Caho, Jr. was running the leaders’ preferred line up top. With Bacon on the chase, any slip up would be costly and Courtney had to be wary. In a fast-paced race, you have to make on-the-fly decisions and Courtney was prepared.

“The closing rate is really fast here,” Courtney explained. “I knew he was going to be running the top. I just backed my entry up a little bit and had to make sure I wasn’t going to run over the top of him coming off the corner. I just set myself up to slide him or go to the bottom in one and two and was able to clear him for the last time. You always take a deep breath once you get by a lapped car because you know the guy behind you has to deal with him next and you can get back to racing your own race.”

Courtney, using the lapped car as a buffer between he and Bacon, used the opportunity to escape from the pressure and close out his fourth USAC National win in 2017 at a track he was visiting for the first time in his career (Sprint: I-80 Speedway in Nebraska & Randolph County Raceway in Missouri. Midget: Montpelier (Ind.) Motor Speedway & the Illinois State Fairgrounds Multi-Purpose Arena). Brady Bacon took second ahead of Justin Grant, Robert Ballou and Kevin Thomas, Jr.

That statistic emphasizes that Courtney, of Indianapolis, Indiana, is a quick study and one who is able to adapt to changing situations. After the track rework between qualifying and the heats, new lines opened up and Courtney took notice.

“It’s very similar to Lawrenceburg and I-80 too, so it didn’t take too long to adapt,” Courtney compared. “This place is a high-speed momentum place. It changed a lot from the beginning to the end. We weren’t even touching the bottom at the beginning of the night. Having to adapt to run the bottom, it’s just something that’s part of the job. You have to figure out when to do it and when not to do it. Tonight, we made the right moves at the right time.”

“He was a little better than us,” Bacon acknowledged. “We got close that one time, but we just didn’t have a lot of grip on exit. We blistered our tires pretty early and it just wasn’t our night. A couple times, we could get a good run and other times, not as much. Tyler never made a mistake, even when we got to him. That’s how you win races. That’s how we won last night.”

Ione, California’s Justin Grant extended his point lead to 79 over Windom with a third-place finish in his Sam McGhee Motorsports/ProGlide Bearings – Mike McGhee & Associates/Maxim/Foxco. But, at first, the point lead didn’t cross his mind as he saw his fellow competitor and friend exit the racetrack.

“My biggest worry was that Chris was hurt,” Grant said. “Sailing out of this place, you don’t know what’s on the other side of those banks. (Crew Chief) Sam (McGhee) ran out on the track under that red flag to work on the car and I asked, ‘Is he all right.’ Sam said, ‘I don’t know.’ I said ‘Well, go down and check on him.’ Sam came back and said he was okay and that made me feel a whole lot better.”

Once Grant found out about Windom’s well-being, he admits that he couldn’t help but think about the points race and how he could capitalize.

“It’s definitely in the back of your mind,” Grant stated. “You never want to see a guy turn over, especially since Chris is a buddy of mine. You hate that for him, but at the same time, it’s a good time to capitalize on points. We wanted to win but when you get an opportunity like that to gain a bunch of points, you try not to throw it away. I wanted to make sure I didn’t make any mistakes that would cost us a bunch. I felt like we did a good job to take advantage of that.”