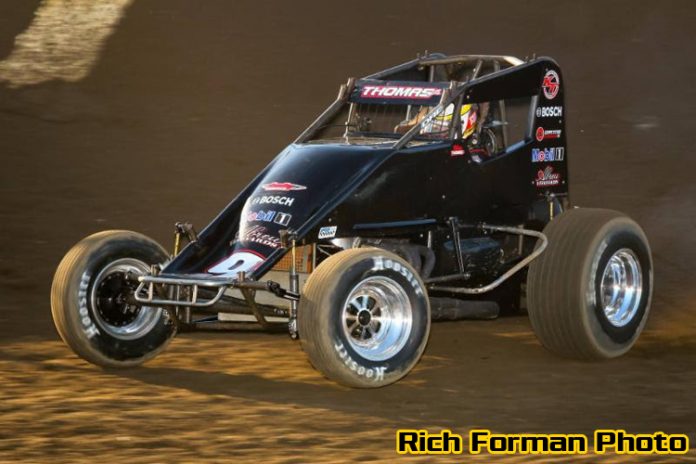 KOKOMO, IN – Wednesday’s “#GYATK Night” at Indiana’s Kokomo Speedway kicks off four straight opportunities for drivers and teams of the USAC AMSOIL Sprint Car National Championship to compete on one of the baddest, fastest quarter-mile bullrings in the USA.

The August 23rd non-points, special event features FREE general admission tickets for all fans in attendance at Kokomo and provides a different format than is used for the majority of USAC-sanctioned sprint car events. In lieu of qualifying, drivers will draw a pill for their groups in which they will hot lap and qualify with. Instead of a six-car invert for the heats, a four-car inversion will be used.

The night concludes with a 27-lap feature celebrating each of the years of Bryan Clauson’s life as well as the number of feature wins he scored during his final season in 2016. The event carries on after last year’s event coincided with Clauson’s Celebration of Life. Kevin Thomas, Jr., the 2016 Kokomo track champion, led the final 25 laps to score the victory over Justin Grant, Dave Darland, Brady Bacon and Shane Cottle on a night in which 47 drivers entered.

#GYATK is an acronym that has become synonymous with Clauson after he proudly displayed the decal on his ride in the Indianapolis 500 each year and, since this weekend last year, the BC Victory Lane now awaits each race winner who captures a win at Kokomo.


The #GYATK Challenge Award and $750 will go to the highest-finishing driver who is making his or her first appearance at Kokomo Speedway behind the wheel of a sprint car. Additional cash prizes will be awarded to the second and third-best first-time Kokomo Sprint Car finishers as well.

Numerous prizes and perks are up for grabs Wednesday, beginning with a complimentary, free pit pass for all competing drivers courtesy of Allstar Performance. The fastest qualifier will earn a gauge set from QuickCar Racing Products. Hoosier Tire is providing a free right rear tire to the first non-transfer in both the C-Main and the B-Main who are competing with Hoosier tires on all four corners. American Racer will supply a free right rear to the highest-finisher in the feature that is using American Racer tires on all four corners.

Right Rear tires must be Hoosier 105 – 16/15 Medium or an American Racer MC3 for the event. The other three corners are open. No minimum weight and no registration or membership fees will be enforced. General safety rules apply.

All gates open at 3pm. Pill draw closes at the USAC trailer at 6:15pm before all drivers head to the front of the grandstands at 6:20pm for the official drivers meeting. At 6:45pm, cars get on track as wheel packing begins, which leads straight into qualifying. Heat races begin at 7:30pm. Pit passes for non-competitors are $30.

LIVE, flag-to-flag coverage of “#GYATK Night” at Kokomo will be streamed on http://www.SpeedShiftTV.com/. You may also watch the race one day later, on-demand at http://www.Loudpedal.TV/.