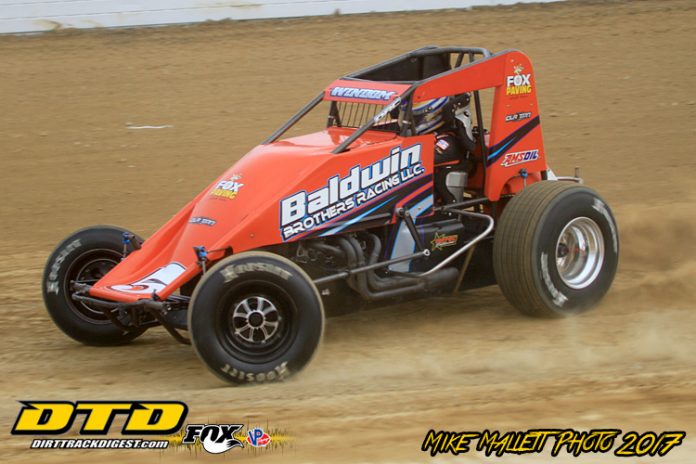 As one curtain closes on the final weekend of summer, another curtain rises on a spectacular stretch of racing that hits the Midwest over the next few weekends that will play a pivotal role in determining the next USAC AMSOIL National Sprint Car champion.

With nearly three-quarters of the schedule in the history books, the season comes down to its dramatic conclusion. The top-seven in USAC National Sprint Car standings have yet to hoist a USAC National Sprint Car title trophy and, after a three-week break to mentally prepare, these driven souls are champing at the bit to see who’s the boldest, who’s the wisest and who can put themselves in position to capture the ultimate prize.

First up this weekend is Friday night, September 15th “Jim Hurtubise Classic” at western Indiana’s Terre Haute Action Track. The legendary “Herk” was unstoppable on the half-mile from late 1960 through the 1962 season where he was an undefeated 5 and 0.

While no driver has since equaled that mark, Chris Windom of Canton, Illinois does happen to have his own current streak of two wins at Terre Haute, albeit in two different kinds of racecars: a Silver Crown Car in May’s “Sumar Classic” and capped off the Midwest portion of the Sprint Car season a year ago in the “Hurtubise Classic” when he outdueled Chad Boespflug for the victory in a 30-lap race that saw 26 unofficial lead changes!


Windom, who’s won three times in a USAC Sprint Car at Terre Haute in his career, trails series point leader Justin Grant by 93 markers heading into this weekend’s two events. But this pair of races could be where he could make up significant ground. Windom is the only driver to win USAC features at both Terre Haute and at Haubstadt, Indiana’s Tri-State Speedway this season, home of this Saturday night, September 16th $12,500-to-win “Haubstadt Hustler,” co-sanctioned by the Midwest Sprint Car Series.

In fact, Windom is one of 14 drivers to have won USAC National Sprint Car features at both Terre Haute and Haubstadt in his career. Another driver on that list is Cullman, Alabama’s Kevin Thomas, Jr., who has been on a roll of late, taking three out of six at last week’s USAC/CRA “California Sprint Week” tour at Calistoga, Watsonville and Hanford.

Recent series champions Robert Ballou of Rocklin, California and Brady Bacon of Broken Arrow, Oklahoma have mastered the task of winning at both the Wabash Valley half-mile fairgrounds oval and at the two dragstrips connected by a pair of turns in southwestern Indiana. So has Chase Stockon and Jon Stanbrough, who are both still seeking their first victories of the 2017 season.

Justin Grant may very well be on his way to a first USAC National Sprint Car title, but he hasn’t yet won at either of this weekend’s venues. However, his two most recent series wins have come on half-mile tracks like Terre Haute and, in his last two Haubstadt appearances, he hasn’t qualified or finished outside the top-four.

Indianapolis, Indiana’s Tyler Courtney leads all drivers with five USAC National Sprint Car victories this season, including the series’ most recent event, where he collected a big payday in “Sprint Car Smackdown VI” at Kokomo Speedway. “Sunshine” took third in his most recent Terre Haute visit and has finished in the top-three in two of his last three Haubstadt appearances.

On Friday night at Terre Haute, pit gates open at 3pm, grandstands at 4pm, drivers meeting at 5:15pm with cars set to hit the track at 6pm (eastern time). Adult grandstand admission tickets are $25, infield admission is $15 and children 10 and under are free.

For Saturday night at Tri-State Speedway, pit gates open at 3pm, grandstands at 4pm, drivers meeting at with on-track activities set to begin at 6pm (central time). Adult tickets are $25, students (age 13-18) are $20, children 12 & under are free.