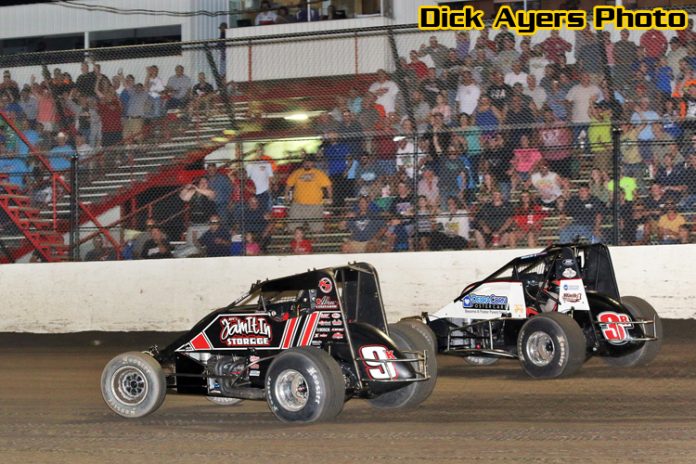 For the second time in a row at the southwestern Indiana quarter-mile paperclip, a green-white-checker duel for the victory came down to he and July Tri-State winner Kyle Cummins.

The setting was the same in the Thomas v. Cummins sequel on the final restart. Thomas led Cummins when the green flag dropped, but heading into the final corner on the final lap, the roles became reversed when Thomas responded to Cummins’ final haymaker by crossing underneath off turn four to defeat Cummins by the blink of an eye, a scant margin of 0.053 seconds to win the $12,500 prize.

“You have to restart on a very racy racetrack with Kyle Cummins on your tail, what do you do,” Thomas pondered. “You just got to drive your (rear) off and hope for the best. These guys gave me a great racecar. To set up a car here to run 40 laps with as much as the track changes, that’s pretty amazing. Hats off to them for reading the racetrack right and making all the right changes. Kyle Cummins is the king of this place. To beat him here doesn’t happen very often and, last time, it didn’t happen.”


In fact, it was even a similar scenario as the night before at the Terre Haute Action Track. Thomas led until four laps to go when Chris Windom used a slider to get by for the top spot. Thomas didn’t have much of an opportunity to respond as he ran out of fuel two laps short of the finish. At Tri-State, lack of fuel came into play on the 40th and final lap. Another lap or another caution would’ve spelled doom for the Cullman, Alabama native who freely admitted in the post-race that his first investment is going to be the purchase of a larger tail tank heading into next Saturday’s “4-Crown Nationals” at Eldora Speedway.

“I had to get going, so I tightened myself up and gave it as much throttle as I could to keep the wheels spinning,” Thomas detailed. “I slung it in there and hoped for the best. All you can do here is choose the right line. The bottom started to dry up a little bit, so I tightened up and got some momentum. Going down the back straight on the last lap, I ran out of fuel. Cummins slid me getting into turn three, but the car picked up just enough to cross him under and get the bite coming off the corner to get back by him. Honestly, if he doesn’t mess up or wheelie, he wins that race.”

With all of his past accolades at Tri-State, Cummins was odds-on favorite after picking up the $500 Unique Breedz bonus for recording ProSource Fast Qualifying time, then winning his heat race. After pole-sitter C.J. Leary’s car jumped out of gear as he led the field into turn one on the opening lap, the inside rows were moved up, placing Cummins in the envious position on the pole.

However, Thomas wouldn’t let Cummins get away scot-free as he ran him down from his outside second row starting position, making the move for the lead with an inside turn two pass on the fourth circuit.

Thomas immediately stretched his lead out to as much as a half-straightaway over Cummins during the next few laps. Yet, the faster you break away, the faster you enter lap traffic, which Thomas did on lap 15. However, Thomas seemingly caught a break when the yellow flag waved for the stopped car of Shane Cottle in turn one, erasing the potential hazard of wading through the lappers for the time-being.

Thomas was gone again when he saw green on the lap 16 restart, but once again, eight laps later, just as Thomas was about to encounter the tail-end of the field, another yellow forced the stoppage of action when Jon Stanbrough spun off turn four in front of the second-place cars of Cummins and Thomas Meseraull, forcing the two to take evasive action to escape unscathed.

With that said, Cummins felt the traffic wouldn’t have made much of a difference at that point in the race as his car hadn’t fully came to him yet.

“Even in traffic, he was still better,” Cummins credits Thomas. “In traffic, I still wasn’t catching him. As the race went on, the car got a little bit better. I was always just bound up a little too tight. Once he passed me, I’m half throttle trying not to wheelie. I knew he was going to be quicker at the get-go. I kind of let him get out front there. Forty laps is a long race and I knew once it got slick, we were going to have a better car.”

On the other hand, Thomas has a love-hate relationship with the lapped cars and, just like many things in racing, sometimes they can help in one instance and may be a hindrance on another occasion.

“Sometimes I like lap traffic and sometimes I don’t,” Thomas admits. “Tonight, a few of those times, I liked it. Then, there were a couple times, they were three-wide and there was nowhere to go. If you made one mistake and pushed, Kyle Cummins is going to peel your stickers off on his way by. You have to focus so hard on, not necessarily hitting your marks, but keeping your car rotated. You have to run the car so tight here. The corners are so sharp that, if you make a mistake, you’ll push for a hundred yards it feels like. It’s a big concentration track. It’s mentally and physically tough. It’s 40 laps around this place as hard as you can go. There’s no cruising whatsoever. You’re always working at the wheel.”

On a restart with 13 laps remaining following a Dakota Jackson spin, Cummins finally stuck close to Thomas when the field got up to speed. For the next eight laps, Cummins was just two car-lengths away as both rode the lip of the cushion, ready to strike when opportunity arose until Dave Darland’s left rear tire went flat with four to go, leaving rubber scattered on the racing surface to bring out the yellow once again.

On the lap 37 resumption, Thomas responded with a great restart, gapping Cummins by about four car-lengths over the next two trips around the oval. With two to go, Thomas’ recurring nightmare reemerged when yet another late-race caution interrupted his run to the checker. The four-car incident in turn four involved Josh Hodges, Chase Stockon, Donny Brackett and Isaac Chapple. All were able to restart.

Once again, Thomas was set up in a green-white-checker situation with Tri-State Speedway master Kyle Cummins breathing down his HANS device. Thomas didn’t exactly know who was behind him on the final restart, but he had an inkling.

“These corners are so sharp, you can turn your head and see a color of a car,” Thomas explained. “On that longer green flag run toward the end, I could see a big white car. I just knew that had to be Cummins. It always is. Near the end, I kept looking back and I didn’t see a white car, but I knew he didn’t drop out, so I had the feeling he was on my tail.”

Cummins threw his first shot heading into turn one on the restart, sliding past Thomas momentarily before snagging the turn two cushion with the right rear.

“I knew if I could break his momentum and get in front of him, he wouldn’t be able to catch me,” Cummins believed. “It was like we were the same speed. I knew I couldn’t slide him. On the restart, I knew I was going to have to do something. I was all over him when we took the green. I got just enough of a run and just threw it in there. When I came up there, I was hard on the throttle and I was just trying to touch the cushion a little bit. It threw the front end and got me behind. If I wouldn’t have messed the cushion up, I would’ve been a lot closer and I think it would’ve been a lot better.”

Yet Cummins wasn’t completely out of the picture frame. As he fell back roughly five to six car-lengths, he shadowed Thomas for a full circuit before sizing up his next move midway down the back straightaway on the final lap. At the same moment, Thomas was experiencing issues of his own.

“I had to get going, so I tightened myself up and gave it as much throttle as I could to keep the wheels spinning,” Thomas details. “I slung it in there and hoped for the best. All you can do here is choose the right line. The bottom started to dry up a little bit, so I tightened up and got some momentum. But going down the back straight, that’s when I ran out of fuel.”

Cummins quickly erased the gap as he threw his car to the bottom on the entry to turn three as Thomas rode the cushion, surprising even Cummins to an extent.

“I thought there was no way I’d be that close to him,” Cummins admitted. “I’m like ‘where’d he go?’

Cummins took over the lead when he slid up in front of Thomas at the exit of turn four. Thomas quickly countered under Cummins and, in a drag race to the line, defeated Cummins by a mere 0.053 seconds to win his second “Haubstadt Hustler.” Meseraull, Chet Williams and Tyler Courtney rounded out the top-five.

Thomas picked up his third USAC AMSOIL National Sprint Car points-paying feature of the year in his KT Motorsports/Jeff’s Jam-It-In Storage – Abreu Vineyards/DRC/Speedway Chevy. It marked the first National victory with newly-hired crew chief Davey Jones who the team brought aboard during USAC/CRA’s “California Sprint Week” a couple weeks back, marking three wins out of six for the combo since joining forces.

After throwing everything but the kitchen sink at Thomas on the final restart, Princeton, Indiana’s Cummins came up just short, finishing in the runner-up position in his Rock Steady Racing/Debra Corn Foster Care – ProGlide Bearings/Mach-1/Cummins.

Throughout the race, Cummins’ mount continually got better and better, but was quite a handful at the beginning of the 40-lapper.

“I knew at the beginning we were going to be way too tight,” Cummins acknowledges. “The track looked like it had moisture, but then I thought it was going to blow off a little bit better, so we tightened it up quite a bit more. At the beginning, I had to be careful. The car was wanting to wheelie. I thought as the race went on, every time we had a yellow, the car got a little better.”

“We know next time to go ahead and keep it a little looser,” Cummins said in retrospect. “I got it as loose as I could with the shocks. At the end, I just got it to where it was good. If we had a chance to do it all over again, it would’ve been so much better. But at the last race, we said ‘this is what we’re going to do. We’re going to tighten her up just a hair more.’ But the track just didn’t get slick enough for us. On the last lap, I didn’t think it was even going to be close. I was so tight, even the middle was decent. But, now we know for the next time and we’ll get it a little looser.”