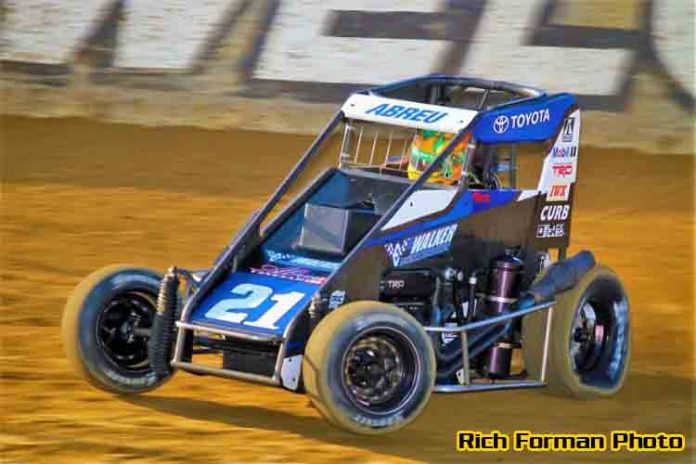 By RICHIE MURRAY
Only one event brings together USAC’s best of the best from a variety of disciplines. Only one event brings all three of USAC’s national divisions together at one venue. Only one event showcases what race fans could only dream of: a racer’s delight featuring a pit overflowing with the baddest racing machines on planet earth.
All converge on Eldora Speedway this Saturday night, September 23rd for the 36th running of the “4-Crown Nationals” – a grand event that’s seen its share of heroes instantly become legends at this fabled dirt track stadium. You could say to win one of these is a feather in a driver’s cap or, in this case, a prong on their crown.
At press time, the only one anticipated to go for all four crowns is Brady Bacon. The Broken Arrow, Oklahoma native picked up a sprint car win on this weekend under the sunshine on his way to the series title in 2014.
Among his arsenal this weekend is the Fred Gormly/RPM Auto Enterprise No. 199, the very same team that’s won the last three 4-Crown Silver Crown events with drivers Jerry Coons, Jr. in 2014, Christopher Bell in 2015 and Chris Windom in 2016. Bacon is still seeking career Silver Crown victory number one.
4-Crown weekend last year was the beginning of Justin Grant and Sam McGhee Motorsports’ winning ways. After capturing the victory in the 2016 sprint portion, the team has carried the momentum into 2017 where they won at Eldora earlier this May and have been at the top of the USAC AMSOIL National Sprint Car standings since day one.
Chris Windom trails Grant by 70, but Eldora and, specifically the 4-Crown, have been kind to him over the years. The Canton, Illinois driver picked off both the Sprint Car and Silver Crown features in 2013, the most recent driver to win both of those particular features in the same night.
Rocklin, California’s Robert Ballou followed up Grant’s victory in May at Eldora with a win the next night in the series’ last visit to the Big E. Five of Ballou’s 28 career USAC National Sprint Car victories have come at Eldora, including his first three as well as the 4-Crown a decade ago back in 2007.
Fellow Californian Thomas Meseraull finally broke through for his first USAC National Sprint Car win at the 2015 “4-Crown.” Since then, he’s become one of the series’ most spectacular, highly-acclaimed drivers. This Saturday, he’s aboard the SC Racing No. 9x, which he started last year’s event in from the front row.
Only Jack Hewitt owns more 4-Crown victories than Dave Darland’s 14, half of which have come at the 4-Crown. The “People’s Champ” from Lincoln, Indiana aims to make this weekend’s stop the place to extend his record streak of consecutive seasons with a USAC National win from 24 to 25.
Like Darland, the versatile Jerry Coons, Jr. has also won his fair share at the 4-Crown with four victories in the midget, sprint and Silver Crown divisions and currently runs second in the Silver Crown standings aboard Gene Nolen’s #20 behind Kody Swanson.
Swanson has yet to win a USAC race at Eldora, last scoring a pair of runner-up finishes during the 2015 4-Crown in both DePalma Motorsports’ sprint car and Silver Crown car. This Saturday, he makes his USAC debut under the Nolen Racing banner behind the wheel of the team’s new Maxim Sprint Car with which he recorded a victory with in a non-sanctioned event at Lawrenceburg Speedway last weekend.
As the Kingsburg, California native closes out another banner season by wrapping up his third Silver Crown title in a four-year span, another past USAC champ and two-time 4-Crown winner makes his 4-Crown return in Keith Kunz’s top-notch midget as well as his own sprinter in the Arctic Cat All Star Circuit of Champions portion of the program.
The always-exciting Rutherford, California native swept last year’s midget program with fast time, a heat win and a stirring drive in the feature to back up his victory in 2013.
Spectator gates open Saturday at noon. An autograph session featuring USAC’s drivers will begin in the fan zone located between turns three and four. The drivers meeting will take place at 4pm with cars hitting the track at 4:30pm. Racing is scheduled to start at 8pm.
Adult general admission tickets are $30. General admission for children age 12 and under is FREE! Reserved seating for adults is $34 with reserved tickets for children age 12 and under just $14.
All drivers competing in the 4-Crown Nationals at Eldora Speedway this Saturday must fill out a membership. NO COST! Please fill out the driver info portion of the sheet, print off and bring with you to the track. The form can be found at http://www.eldoraspeedway.com/forms/competitor-membership-app.pdf.