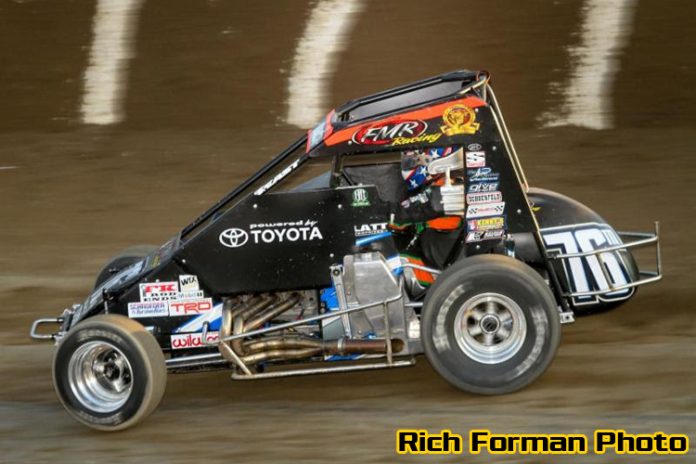 ROSSBURG, OH – Brady Bacon has thrown his hat into the ring to pull quadruple duty in this Saturday’s 36th “4-Crown Nationals” at Eldora Speedway.

The Broken Arrow, Oklahoma driver will take part in all four legs of the “4-Crown” where he will compete in USAC’s Silver Crown, AMSOIL National Sprint and National Midget divisions as well as with the Arctic Cat All Star Circuit of Champions.

Bacon has secured rides in Fred Gormly’s No. 199 Silver Crown Car, the Dooling/Hayward Motorsports No. 63 USAC Sprint Car, the FMR Racing No. 76m USAC Midget and the Bacon/Marshall Motorsports No. 99 wing sprint car.

A handful of drivers have participated in quadruple duty at the “4-Crown” since its inception in 1981, including Bacon himself just a year ago. Most notably, Jack Hewitt pulled off the improbable by winning all four classes in 1998 when the divisions included the UMP Modifieds in place of the All Stars.

Gates open Saturday, September 23 at noon. An autograph session featuring USAC’s drivers will begin in the fan zone located between turns three and four at 3pm. The drivers meeting will take place at 4pm with cars hitting the track at 4:30pm. Racing is scheduled to start at 8pm.

Live coverage of the event will be streamed on http://www.EldoraSpeedway.com/. You can also watch flag-to-flag coverage a day after the event on-demand at http://www.Loudpedal.TV/.