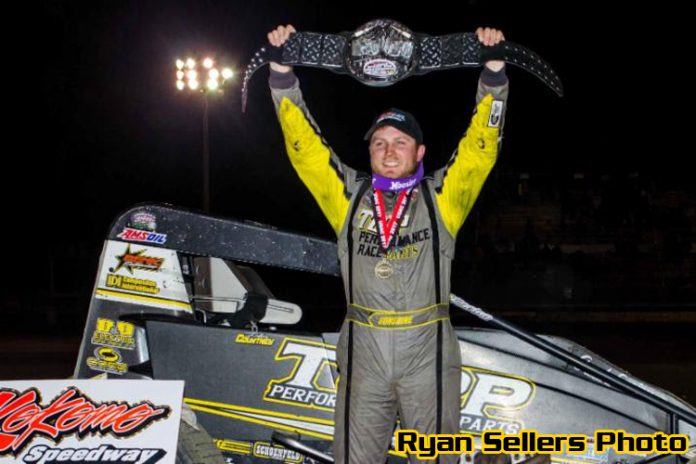 INDIANAPOLIS, IN – Clauson/Marshall Racing, with the addition of NASCAR driver and USAC champion Ryan Newman to the team ownership role, will field veteran driver Tyler Courtney full-time on the USAC AMSOIL National Sprint Car trail in 2018.

Tyler Courtney, USAC’s Most Improved driver in 2017, moves over to the CMNR ride following a successful two-year run with TOPP Motorsports in which they teamed up for six USAC National Sprint Car feature wins. Meanwhile, this past season, CMR was the home for Courtney’s first three career USAC National Midget victories. For 2018, CMR’s home is where Courtney’s heart lies in the sprint car as well.

“It’s an opportunity I felt like I couldn’t pass up with the people who are going to be involved,” Courtney said. “I don’t want to have any regrets ten years down the road for not doing it. I talked to a lot of people who helped me make this decision. They all said to go with my heart. My heart is staying right here at Clauson/Marshall/Newman Racing.”

Newman, meanwhile, returns to his roots as he joins Courtney and team for the run at a USAC title.


“Both Tim (Clauson) and Richard (Marshall) gave me the opportunity to be involved with something that I’ve thought about for a while,” Newman said. “I wanted to do this at the right place at the right time. It’s a no brainer for me to be a part of something that I think will be great. This was a path in my career that made a difference. It was several rungs on the ladder that made a difference, being a part of USAC Midget, Sprint car and Silver Crown racing. It’s an honor to be a part of what they’re putting together.”

The prospect of having not only the Clauson/Marshall Racing team on your side, but that of 1999 USAC Silver Crown champion and 2008 Daytona 500 winner Newman, has Courtney elated.

“It’s pretty dang cool,” Courtney exclaimed. “The fact that Ryan wants to come back and support a USAC team is really special. The fact they wanted to do this with a kid like me is even cooler. I get to work with Tim, who’s been a part of my career basically since it started. It’s such a big comfort level over here. They’ve got everything to go for a championship.”

Newman has maintained a presence in USAC racing throughout his NASCAR career, which includes 18 victories and 51 poles at the Cup level. He annually competes in the Silver Crown series each year and keeps a keen eye on the schedule/results and maintains friendships with several USAC drivers.

“I think it’s some of the best racing there is in the world,” Newman assures. “It was what I was born and raised in. With their horsepower-to-weight ratio, big tires, tacky racetracks, wheel stands and methanol, you name it, it’s pretty spectacular if you like racing.”

Clauson Marshall Racing made its initial on-track appearance late in 2016 and has instantly become a force on the USAC National Midget trail, picking up five wins in 2017. However, in addition to the midget program, team owner Tim Clauson desired an eventual expansion of the team to USAC’s AMSOIL National Sprint Car series.

“Ever since Bryan and I won the 2012 USAC Sprint Car Championship, I have had a passion to get back to chasing another title,” team owner Tim Clauson said. “Richard and I had discussed the prospect and I think we both knew at some point it would be a part of Clauson/Marshall Racing, but we both thought we were a few years away. Building a championship team takes a lot of moving pieces and, when Ryan expressed interest in being involved, it accelerated the conversation and the pieces started to fall into place. The key piece to the puzzle was making sure we had the driver we wanted and, when Tyler Courtney became available, it became inevitable that we would put something together.”

“Having Ryan Newman involved in our program is both exciting and humbling as is his history in not only USAC, but motorsports as a whole,” Clauson continued. “It is something I feel we will all be able to lean on as we continue to build CMR. As proud as I am of this partnership, I am also proud that Ryan wants to be involved and support the USAC series which we all feel has the best on-track product in motorsports. While it will be a busy next two months getting ready for Florida, we are excited to add another top, quality ride to the USAC Sprint Car series.”

Prior to Bryan’s passing, Marshall and Tim Clauson put together a three-year plan to take Bryan Clauson, Inc. to another level. But, as Marshall stated, Bryan would want us to race on and that they did. After blasting through that three-year plan in one year, Marshall, and Newman, made the decision to go USAC Sprint Car racing with CMR.

“Ryan’s a great friend,” Marshall begins. “We were talking a couple times last month over dinner how cool it would be to go USAC racing. I thought it would be really cool. I talked to Ryan quite a bit and he’s very passionate. He said he wanted to support the sport and be involved again. Tim, Ryan and I put our heads together and here we are. Game on!”