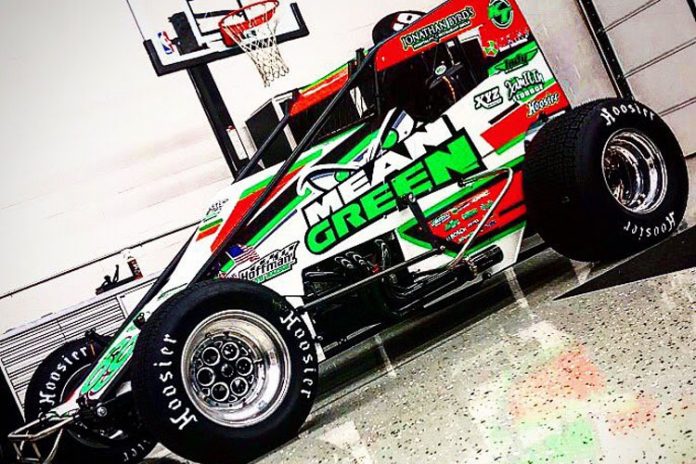 Over the course of the past several decades, Hoffman Auto Racing/Dynamics, Inc. has been synonymous with USAC Sprint Car success.

Likewise, over these past two seasons, no driver has won more traditional sprint car features than Kevin Thomas, Jr.

When the announcement came down in late 2017 that these two success stories would illustrate a new chapter in the coming year by combining resources, it made complete sense. Thomas’ car will be dressed in the storied No. 69 that the Hoffman family has utilized in 93 of its 101 USAC-sanctioned Sprint Car victories.

However, Thomas’ team maintains the structure that led himself and the No. 9K to a series-leading six USAC National Sprint Car points wins last year with returning crew members Davey Jones and Brad Alexander, and now the additions of Hoffman Auto Racing staples Richard Hoffman and Tim Waechter. The last time the car hit the track with KTJ, the cork was popped on the champagne in victory lane – something that the Cullman, Alabama driver aims to make a regular occurrence in 2018.


“It’s the same chassis and the same engines, literally the same everything,” Thomas reiterated. “Once I got back from California (last November), we stripped everything down. Then, we built one car back up and had one car already built that we didn’t have to use and changed a few little things on it. We threw some white bodies and some bright vinyl on them and Mean Green on the side and we’re going to roll them back into the trailer (for the season openers) the way we finished last year.”

“We’ve got the same crew with Davey and Brad back and my wife, Whitney, who keeps everything running with all the paperwork, T-shirt sales, arranging flights and sponsors,” Thomas continued. With the addition of Richard and Tim, I think it’ll be a good combination. Along with that, they expect results and it does bring a little bit of stress, but you must to be mentally prepared for that going in and know that they expect to win races as much as you expect to win races.”

Seemingly, the only noticeable differences are the skin of the car with black, red and white giving way to green, orange and white. Based on last year, on paper, this seems like a surefire bet to contend for a title. As most know, it takes several factors to be a front runner from the start in the southeast in February until they cross the finish line in November out west, including good fortune. But Thomas and the Hoffmans have proved time and time again, separately, they’ve got what it takes to accomplish the task at hand in terms of victories. But the Hoffman’s championship pedigree may prove to be the ingredient that is the ultimate recipe for success in 2018.

“Considering where I started, whether it’s people doubting me or whether it’s me doubting myself, from winning all those races last year to now being in the Hoffman car, is really cool,” Thomas contends. “Everybody who’s ever done anything in a sprint car has driven for Hoffman. To put your name on that list is a really cool honor. I’m blessed to be in the position that I’m in to where they wanted to come on board with us.”

“It’s just a lot a history behind everything that they do,” Thomas praised. “When (Richard and Tim) come to the shop in Brownsburg, (Ind.), it’s just cool to have them there. When you put the colors on the racecar, which are quite brighter than what I’m used to, it’s humbling to look at these cars and see what’s on the side of them with Hoffman, Mean Green and Jonathan Byrd’s. I’m just glad I’m along for the ride!”

Though Thomas has won numerous times as he’s climbed up the charts of USAC’s National Sprint Car win list (now 27th all-time with 18 wins), he’s yet to claim a title. He finished fifth in sprint points in 2013 and third in midget points in 2015. However, it was 2017 when Thomas emerged as a true title contender with a valiant effort toward a first USAC AMSOIL National Sprint Car championship despite missing the first two races of the campaign. He quickly made up for lost time and only finished a mere 58 points out of the lead.

This year, the full slate lies ahead of Thomas. The Hoffmans have gotten there 11 times since 1989 with drivers Rich Vogler, Steve Butler, Robbie Stanley, Dave Darland, Tracy Hines, Jerry Coons, Jr. and Brady Bacon. It’s an illustrious list of drivers that Thomas could join, but, as a driver who admits to not enjoying running for points, a complete season of performances he displayed last year will surely put him in contention.

“Whenever you’re racing for points or going for any kind of championship like that, it’s a little stressful,” Thomas maintains. “During the winter, you must build all the spares for the whole year to make it easy on you, so you can focus on driving. I don’t necessarily enjoy running for points because it’s always a thought process on the racetrack instead of just going out there and racing.”

“I’ve run for sprint car and midget titles before and I’ve made mistakes,” Thomas admits. “I’ve learned from them and I’ve stressed myself out before. Every time I get on the racetrack, if I qualify eighth, I’ll get mad because I didn’t get my qualifying points instead of just going out there and having a good time and racing as well as I can to take the pressure off myself. You can basically make yourself mentally implode whether (the season) starts out good and ends up bad or it starts off bad and ends up good. There’s a fine line right there.”

“I think with our team being the same as it was last year, with Hoffman Auto Racing and Mean Green coming on board, it’s just kind of adding fuel to the fire,” Thomas said. “It does create a little bit of a safety barrier for me financially, but, with us keeping the team chemistry the same, it will be fun. It’s obviously a lot of stress, but the way I’m mentally wired, I stress all the time because I hate losing. I expect myself to win.”