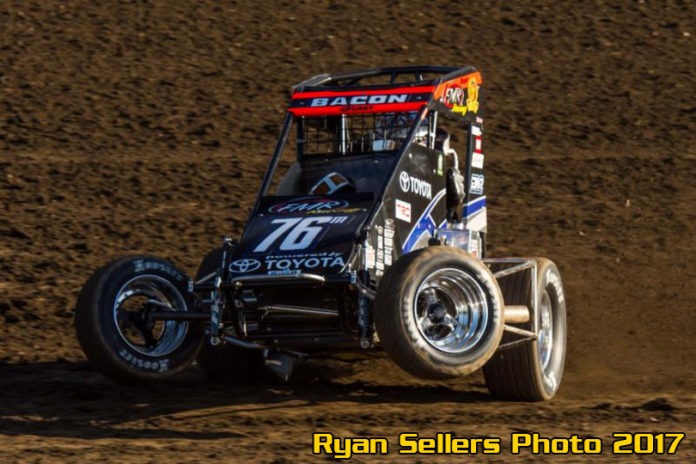 DU QUOIN, IL – Unprecedented is a word not to be used lightly, but with a new title sponsor and a plethora of new teams and talented drivers joining the fray, the 2018 USAC P1 Insurance National Midget season is shaping up to be something that these eyes haven’t seen.

At press time, an impressive 19 teams intend to compete on a full-time basis with the series this year, trouncing last year’s 11 who took on the full schedule.

Another unprecedented part of the equation is Keith Kunz Motorsports/Curb-Agajanian’s team of septuplets. Returnees include 2017 series champion Spencer Bayston of Lebanon, Ind., 2017 Rookie of the Year Tanner Carrick (Lincoln, Calif.), plus returnees Ryan Robinson (Foresthill, Calif.) and Holly Shelton (Sacramento, Calif.), although she has previously announced that she will miss this Saturday’s season opener at the Southern Illinois Center in Du Quoin with a shoulder injury. Newcomers to the team include the experienced Tucker Klaasmeyer (Paola, Kan.) as well as Rookie of the Year contenders Sam Johnson (St. Peters, Mo.) and 2017 POWRi Midget champ Logan Seavey (Sutter, Calif.).

Clauson/Marshall Racing burst onto the scene last year by winning the season opener and putting all three of its full-time drivers in the top-six of the standings. Tyler Courtney (Indianapolis, Ind.) led CMR with three wins in 2017, while Justin Grant (Ione, Calif.) won two for the team a year ago and returns sporting a new number, taking over the car driven to second in the standings by Shane Golobic. In his place, newcomer Zeb Wise (Angola, Ind.) joins the team in pursuit of Rookie of the Year honors.


USAC Triple Crown champion Jerry Coons, Jr. and current USAC AMSOIL National Sprint Car point leader Kevin Thomas, Jr. occupy the two seats of a potent Petry/Goff Motorsports lineup for 2018. Coons, the 2006 and 2007 series titlist out of Tucson, Ariz. is back for his second season in the No. 25 following a partial USAC schedule last year. Cullman, Alabama’s Thomas, meanwhile, is back in a midget full-time for the first time since 2015 when he captured two USAC victories. Thomas got off to a hot start in 2018, sweeping both nights of POWRi’s stop in Ocala, Fla. in February.

Tucker/Boat Motorsports has added a second car to its stable alongside Chad Boat (Phoenix, Ariz.), a winner of six series races for the team over the past two seasons. Stillwater, Oklahoma’s Zane Hendricks, a micro sprint racing veteran and relative newcomer to midgets, joins TBM for a full-time run in his Rookie USAC campaign.

Broken Arrow, Oklahoma’s Brady Bacon is a two-time USAC AMSOIL National Sprint Car champ, but he and Frank Manafort Racing have also been in contention for a USAC National Midget title in each of the previous two years with four wins and a pair of third-place finishes in the standings in 2016 and 2017.

Tyler Thomas has been a regular on the circuit for several seasons now, but the Collinsville, Okla. driver is ready to take next step as he and the family-owned team eye their first career series win and a full-season run at a title. Fellow Oklahoman Matt Moore and Hergott Racing Development are newcomers to the scene as they make their initial foray to the series in a car that pays homage to famed “Nine” cars of year’s past.

The 21-race championship schedule begins with the “Shamrock Classic” this Saturday, March 10 on the 1/6-mile dirt oval inside the Southern Illinois Center in Du Quoin. Forty-eight midgets have entered the third annual event which also features micro sprints.