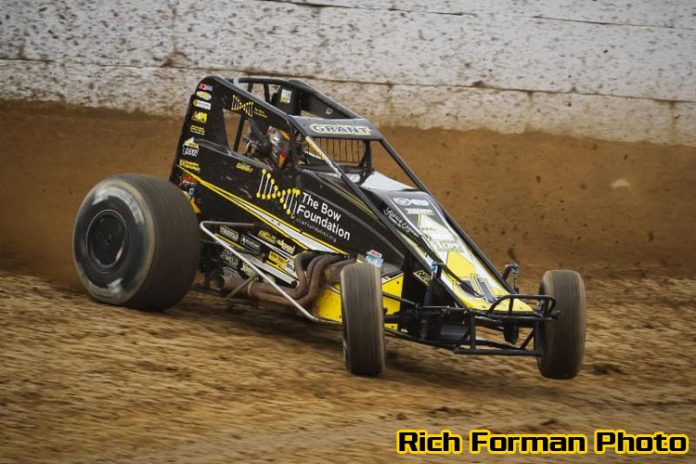 ROSSBURG, OH – Eldora Speedway has been the home to several unprecedented feats over its five-and-a-half decades as an annual host of USAC events.

Jack Hewitt and Kyle Larson’s “4-Crown Nationals” sweeps in 1998 and 2011, respectively, immediately come to mind. This Friday and Saturday’s #LetsRaceTwo is as much of a rarity; it’s one event that has no equal, one that you will only see once a year – a doubleheader featuring the USAC AMSOIL National & World of Outlaws Craftsman Sprint Cars at the same venue on the same weekend.

Interestingly enough, the winners of the USAC portion of the event’s debut in 2015 are the same as the two most recent winners a year ago: Robert Ballou and Justin Grant.


However, no driver has done the deed in four-straight seasons. Grant’s streak began in 2015 with a last-lap pass of C.J. Leary on the second of the two-night #LetsRaceTwo. In 2016, he picked up a “4-Crown” win and, in 2017, won the opening night of #LetsRaceTwo in a wild late-race battle with Dallas Hewitt.

The second night of last year’s event was a storybook finish as 2015 series champ Robert Ballou returned to victory lane after an eight-month recovery following serious injuries to win in just his second start of the season. Ballou has been a maestro at Eldora, winning five times throughout his career at the half-mile dirt oval since 2007. The Rocklin, Calif. native comes into Eldora fresh off a season-best third-place finish in a hotly-contested last-lap duel with Kevin Thomas, Jr. last Saturday night at Plymouth (Ind.) Speedway.

Cullman, Alabama’s Thomas is undoubtedly the hottest driver in the ranks right now. In the past seven days, he’s won the USAC race at Plymouth, sandwiched between local sprint car wins at Gas City (Ind.) I-69 Speedway and Kokomo (Ind.) Speedway. On Tuesday night, he kept the ball rolling by winning the USAC Benevolent Foundation 3-Hour Karting event at Speedway Indoor Karting in Speedway, Ind., his fifth victory in the event, which tied him for the all-time lead with Tracy Hines.

Yet, Thomas has yet to find the breakthrough at Eldora, joining a list of top guns looking to take their first step into Big E’s victory lane, a list that also includes Tyler Courtney and Chase Stockon, both of whom have won in USAC Sprint Car competition this season. Thomas’ Dynamics, Inc./Hoffman Auto Racing team has won 11 times at Eldora since 1974 with drivers Larry Cannon, Robbie Stanley, Dave Darland, Jerry Coons, Jr., Tracy Hines, Kyle Larson and Brady Bacon.

The only driver with a USAC National Sprint Car win in 2018 and a previous victory at Eldora is none other than Darland, who, in fact, won his first series race at Eldora 20 years ago aboard the Dynamics/Hoffman No. 69. Darland since then has captured four more to grab five career USAC Sprint wins at Eldora, tied with Ballou for most among active drivers.

Back in 2016, Bryan Clauson opened #LetsRaceTwo with his only USAC Sprint Car win at Eldora. One night later, Hanford, California’s Chad Boespflug got back into the winner’s circle with his first win in three years aboard the No. 98, which he has returned to for 2018.

Eldora Speedway has contested the most USAC National Sprint Car events of any track at 195 – 38 more than the track with the second most, the Terre Haute (Ind.) Action Track.

Friday’s USAC portion of #LetsRaceTwo will also mark the 34th running of the “Don Branson/Jud Larson Classic.” The event began in 1981 with Dave Peperak’s dramatic last-lap victory on ABC Wide World of Sports. The tradition continues this year with three active drivers possessing wins in the event. Ballou and Grant are two-time winners with Ballou scoring the prize in 2007 and 2010, while Grant captured the 2015 and 2017 races. Darland bagged his lone win in 2014.

Ticket sales begin at 1:30pm on both Friday and Saturday at the main gate and the turn four gate. The pit gate opens at 2pm. Spectator gates open at 2pm. The drivers meeting will take place at 5pm. Cars hit the track at 6pm.

You can watch the race live on http://www.Dirtvision.com/ or listen live on the USAC app. A day later, on-demand, you can re-watch all the evening’s racing action with flag-to-flag coverage on http://www.Loudpedal.TV/.

All drivers planning to compete in this weekend’s #LetsRaceTwo event are required to fill out and turn in their 2018 Eldora Speedway membership application form. Forms must be turned in to a USAC representative prior to getting on the track. There is no fee.