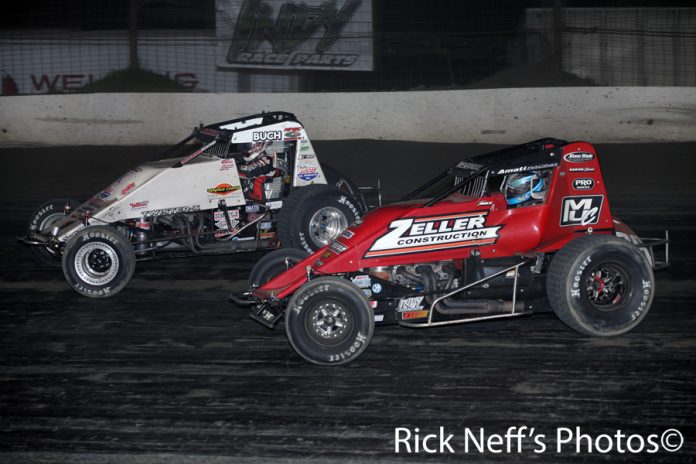 FISHERS, IN – There are many barometers for success when it comes to capturing a USAC AMSOIL National Sprint Car title.

Some barometers prove fruitful and some prove to be faulty over time. Yet, when one barometer results in a certain thing happening nearly every year, perhaps we should take note.

That’s the case with the correlation between a driver winning Eastern Storm and going on to be crowned the USAC National Sprint Car champ later that same season.

Something says that’s a trend. There’s many theories that abound, but the main thing that is commonplace amongst all the teams competing in Eastern Storm is that this is a long stretch of races on consecutive nights on the road, which can be taxing both mentally and physically for even the most skilled and prepared teams.

The teams that make it to the other end of the tunnel with a good showing each night and were fairly easy on their equipment supply, will use it a positive to build upon and a morale booster for the summer stretch.

On the other hand, teams that crash a car, blow an engine, have a bad showing or simply just get road weary, those things can snowball and that snowball can turn into an avalanche that can grow until your tangled in a web that’s hard to break out of.

Chris Windom was the most recent to pick up both titles in the same year in 2017, becoming the latest in a long line of drivers who’ve used the June stretch as a harbinger of things to come later in the year.

In 2010, Jones was third in the USAC standings, 27 markers out of the lead, but three wins in four nights vaulted him into a 42-point lead over Damion Gardner that he would not relinquish on his way to the fourth of his five USAC Sprint championships.

Twice again the tide turned in June, both to the benefit of Bryan Clauson. In 2012, Clauson wasn’t even residing in the top-ten of the USAC points by the time Eastern Storm arrived. He was busy tending to duties for his Rookie campaign at the Indianapolis 500. Two victories at Grandview and New Egypt and an Eastern Storm crown catapulted BC into sixth in the USAC standings by the end of the four-race swing. From there, he would drive on to his first USAC Sprint title.

One year, later, in 2013, Clauson was sixth entering Eastern Storm. Although garnering no victories, Clauson’s consistency paid off with runs of 2nd, 3rd and 4th to earn a second consecutive Eastern Storm trophy. Clauson chomped down the USAC point lead from 49 to 34 in that stretch and would wind up with another USAC championship under his belt.

Kevin Thomas, Jr. holds the USAC National Sprint Car point lead entering the 12th Eastern Storm which begins this Thursday at Grandview Speedway in Bechtelsville, Pa. He’s already picked up three wins on the season, including last Friday at I-80 Speedway in Greenwood, Neb. and has been consistently consistent. However, Tyler Courtney has been the hottest of late, picking up two of the last three wins at Terre Haute and Knoxville and finished 2nd to KTJ at I-80 and is 2nd in points.

Plus, you have the defending champ of both Eastern Storm and USAC lurking in the shadows of the third position. All three were feature winners on Pennsylvania soil last June, possibly another harbinger of things to expect out of these three this week.