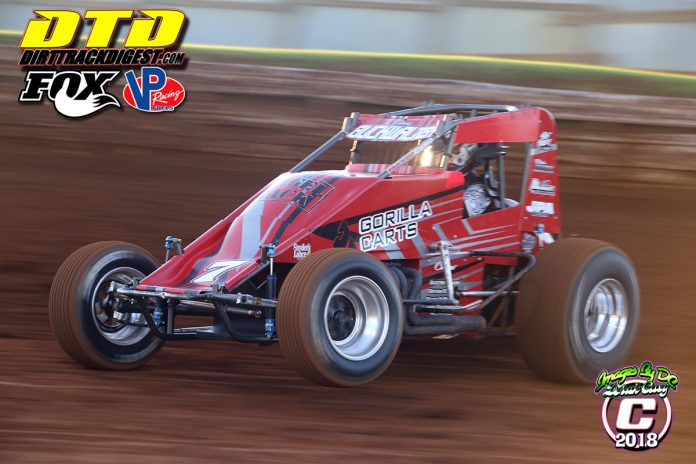 GAS CITY, IN – The month of September just got a little busier and a lot more exciting with the edition of Gas City I-69 Speedway to this year’s USAC AMSOIL National Sprint Car schedule on Friday night, September 7.

The event is part of a big weekend of USAC racing, which also includes the USAC Silver Crown Champ Car Series one night later, on Saturday, September 8, at Lucas Oil Raceway in Brownsburg, Indiana for the “Rich Vogler Classic,” leading into Sunday’s Monster Energy NASCAR Cup Series’ “Big Machine Vodka 400” at the Brickyard powered by Florida Georgia Line. The addition to the schedule has Gas City promoter Jerry Gappens thrilled.

“Being included as part of USAC’s event schedule during Brickyard 400 Week is a great opportunity,” Gappens said. “We look forward to welcoming race fans from around the country and establishing this as one of the biggest, one-night, USAC sprint car races in the country. I want to thank Kevin Miller, Levi Jones and the entire USAC team for working with us in creating this new event.” Gappens added.

The quarter-mile dirt oval has been the host of 30 USAC National Sprint Car events since making its debut on the schedule in 2002. Current USAC stars such as Shane Cottle, Dave Darland, Kevin Thomas, Jr., Brady Bacon, Chase Stockon, Tyler Courtney and C.J. Leary have won at the Grant County track over the years.

The September date is the latest in the year USAC will have ever visited Gas City, putting championship implications on the line as the season comes down to the wire.

General admission tickets are $25 with children 12 and under admitted free with a paid adult. Pit Passes are $30. The speedway also provides free parking and camping. For more event information, go to www.gascityi69speedway.com or www.usacracing.com.