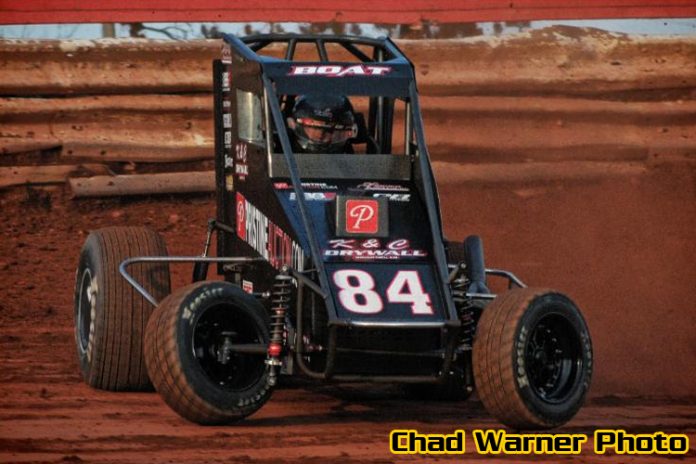 There was no trepidation whatsoever, however.  The Phoenix, Arizona driver and his team rolled the black car out of the hauler at the 3/8-mile dirt oval with a myriad of confidence after a palate of struggles plagued them in the white ride during recent trips to Mid-America and the launch of the Pennsylvania swing.

Boat led all 30 laps and was undeniably dominant from start to finish despite a lengthy open-red situation that may have seemed like a three-hour tour to him as he sat in his seat, anticipating the final six-lap stretch.

However, Boat, as he had done time and time again on each restart throughout the 30-lapper, motored away from the competition to win his eighth career series feature.

“Honestly, we’ve been struggling these last five races,” Boat admitted.  “We knew we had this car sitting here and we knew it was fast.  We ran it the last race of ‘Indiana Midget Week’ at Kokomo in early June, so, we said ‘why not?’  Obviously, when you’re struggling, you have to change something.  We brought it out and it worked.  We have a lot of confidence in our cars, so there wasn’t any worry.”

Boat immediately grabbed the lead on the start from his outside front row starting position, surging past point leader and pole sitter Logan Seavey on the initial lap to gain a lengthy advantage that would be the theme throughout the whole deal.

The first stoppage for a calamity occurred on the eighth lap when series Rookie and fifth-running Kyle Craker flipped between turns three and four, catching up Tyler Courtney and Spencer Bayston in the carnage as well.  Miraculously, all three were able to restart.

Throughout the mid-portion, Boat partook in no less than eight starts and restarts following yellows and reds, but each time, it would play out in a similar manner with Boat running roughshod on the field and splitting away.

“I knew the start would be crucial with Logan (Seavey),” Boat recalled.  “On a big track like this, clean air is huge.  Not from the standpoint of changing the car setup, but just being able to run your own race and not being in traffic, being able to run anywhere you want and do whatever you want to do with the car.  I knew that was going to be huge, and once I got out front, I just tried to run my race.  Obviously, with the restarts, I couldn’t see behind me to see how close or how far they were.  I never really saw anyone, so I kind of knew I was okay.  But all the restarts had me worried.”

The only one able to hang in Boat’s neighborhood for more than a moment was Saturday night’s Lanco winner Zeb Wise. On the lap 23 restart, he set up shop about four lengths from the tail of Boat, but Boat slammed that opening for opportunity and was gonzo once again.

Two laps later, the final stoppage came in the most serious accident of the night when ninth-place Kenny Miller flipped over the turn three guardrail, coming to a rest upside down nestled between the back side of the wall and the sponsor billboards. Though Miller was awake and alert when emergency personnel arrived at the scene, he was transported via ambulance for further observation.

The ensuing cleanup and the transportation of Miller led to a lengthy, 40-minute red flag period in which crews were permitted to tend to their machines to tinker and make adjustments that could alter the outcome of the race.

Boat knew what he had to do. He had to run six laps as hard as he could – six qualifying laps as he put it – to close out the contest. However, with all the talent behind the wrenches entering the fray to make their impact, it became an open invitation to get beat, as Boat points out. But, that didn’t kill the vibe in the driver who’s won seven of his eight career races in the month of August, three of which have come in the “Keystone State.”

“I was pretty confident in what we had,” Boat said. “But we made a couple changes just because Zeb was coming and, obviously, the track had changed since the beginning of the race, so we could tighten it up a little bit. The big thing was just keeping me comfortable where I could run that high line and make speed up there.”

It didn’t make a difference before or after the changes during the red, Boat was headed out of Pennsylvania with a fatter wallet and another trophy in his case as he once again throttled away from Wise on the restart, closing out a pretty flawless performance with a 1.812 second victory over Wise, Brady Bacon, Eastern point leader Alex Bright and Tanner Carrick.