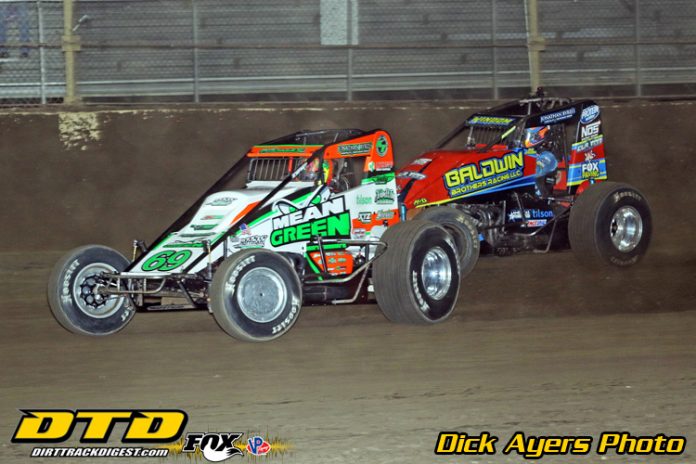 Two-hundred and fourteen years following Lewis and Clark’s departure from the eastern edge of the Mississippi River where they began their expedition of the newly-acquired land to the west, a new crop of adventurers is eager to make their mark on their march to the Arch.

Names such as Thomas, Windom, Courtney, Leary, Stockon, Ballou, Darland, Bacon, Grant and Chapple are among the explorers of today in search of a path that will take them to victory lane in this weekend’s “River Town Showdown” presented by Brandt, a two-night rendezvous taking place at a pair of venues not seen before by the stars of USAC AMSOIL National Sprint Car racing: the 3/8-mile version of Tri-City Speedway in Granite City, Ill. on Friday, August 31 and Federated Auto Parts Raceway at I-55 in Pevely, Mo. on Saturday, September 1.

The first stop of the “River Town Showdown” brings the Sprint Cars to Tri-City for the first time since 2006, which was also the last time the series made its way to the state of Illinois. However, this is the first stop for the series on the newer 3/8-mile configuration. All 19 previous visits by the series came on the old half-mile track between 1967 and 2006 with winners Greg Weld, Ralph Liguori, Rick Hood, Randy Standridge, Kelly Kinser, Steve Butler, Sammy Swindell, Jack Hewitt, Danny Smith, Doug Wolfgang, Tony Stewart, Jay Drake, Troy Rutherford and Josh Wise.

Likewise, it’s the 52nd stop for the series in the “Land of Lincoln.” The last driver born east of the Mississippi River to win a USAC National Sprint Car points-paying feature in Illinois was Indiana’s Derek Davidson who won at Red Hill Raceway in Sumner back in 1998. The last Illinois native to win in his home state was Randy Standridge of Springfield, who won at his home track of Springfield Speedway in 1987.

Saturday’s voyage to Pevely, Missouri’s Federated Auto Parts Raceway at I-55 is the first trip for USAC to the high-banked quarter-mile in 30 years, a late model race won by Willy Kraft. However, no open wheel cars under USAC sanctioning have hit the track there. In fact, this will mark just the 20th visit by the USAC National Sprint Cars to Missouri.

I-55 is one of three first-time venues on the series’ calendar this year. In 2017, the Sprints hit two tracks for the first time. Justin Grant won at Plymouth (Ind.) Speedway and Tyler Courtney was victorious at I-80 Speedway in Greenwood, Neb. The first two new venues the series hit back in June during “Eastern Storm” were won by Kevin Thomas, Jr. at Brigdeport Speedway in Swedesboro, N.J. and Thomas Meseraull at New York’s Weedsport Speedway.

Additionally, Courtney was the winner of the series’ last visit to the “Show-Me State” last season at Randolph County Raceway in Moberly.

Chase Stockon, the season-opening winner at Bubba Raceway Park in Ocala, Fla., is sixth ahead Greenfield, Indiana’s C.J. Leary of Greenfield, Ind., followed by the surging Justin Grant, of Ione, Calif. Ninth is Rocklin, California’s Robert Ballou, who possesses 28 career USAC National Sprint Car wins, second only to Darland in terms of wins among active drivers. Ballou is a past winner with USAC in the state of Missouri back in 2012 at Valley Speedway in Grain Valley, Mo. Rounding out the top-ten is 2016 Rookie of the Year Isaac Chapple of Willow Branch, Ind.

Extra cash is up for grabs at both Tri-City and I-55 with the winner’s share being bumped up to $6000 and the minimum start money being expanded to $600.

Friday at Tri-City gets underway with pits opening at 3pm, front gates at 5pm, drivers meeting at 5:30pm and cars on track at 6:30pm. Adult general admission tickets are $25. Pit passes for USAC members are $30 for members and $35 for non-members.

Saturday at I-55 gets started with pits opening at 2pm, front gates at 5pm, drivers meeting at 5:30pm and cars on track at 6:30pm. Adult general admission tickets are $25. Pit passes for USAC members are $30 for members and $35 for non-members.

If you miss the live show or want to watch again, you’re in luck! http://www.Loudpedal.TV/ has you covered with on-demand coverage of all the night’s action the very next day. You can also listen to flag-to-flag coverage LIVE on the USAC app. 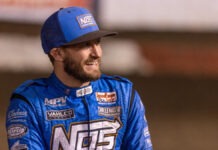 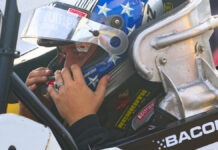