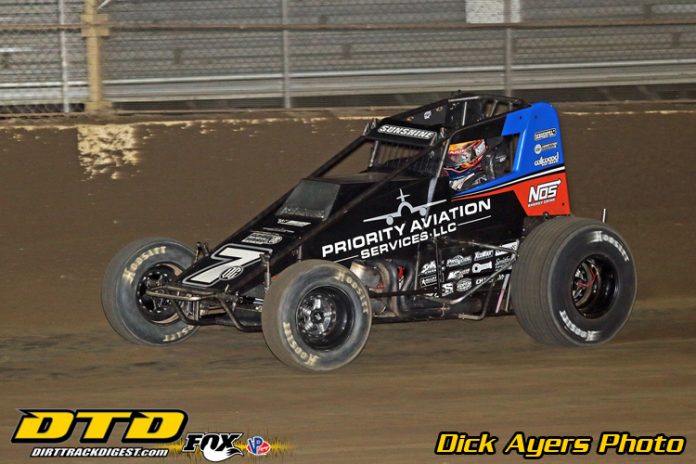 Granite City, IL – Tyler Courtney hasn’t visited Tri-City Speedway that often throughout his racing career.  In fact, Friday night marked just the fourth visit to the 3/8-mile dirt oval for the Indianapolis, Indiana driver.  But, each time, it’s been in a different type of car, from a micro, to a midget and to a winged sprint car.

Yet, it doesn’t seem to matter what type of track Courtney visits this year.  If it has a victory lane, seemingly, Courtney knows how to find his way there after 30 laps, which he did again for the ninth time this season in USAC AMSOIL National Sprint Car competition, leading the final 21 laps and warding off an all-out assault from Brady Bacon and Kevin Thomas, Jr. during the final laps to score his 15th career series win on night one of the Brandt “River Town Showdown” in his Clauson Marshall Newman Racing/Priority Aviation – Competition Suspension, Inc./Spike/Rider Chevy.  The triumph ties him with Bobby East, Cory Kruseman, Jud Larson & Brian Tyler for 33rd all-time.

Courtney rolled off from the fourth-starting position, while C.J. Leary rocketed around the outside of pole sitter Chase Stockon to occupy the top spot off turn two on the opening lap, where he would remain for the first nine circuits.

On the tenth lap, Courtney seized the opportunity, diving to the bottom of turn one and sliding up in front of Leary to capture the lead.  Leary surged back toward Courtney and the two made contact off the exit of turn two, sending Courtney sideways down the back straightaway.  Courtney recovered as Leary made an attempt to reclaim his once-owned land up front to no avail.

Following a yellow for Kyle Stearns losing a wheel on his machine with 10 laps complete, Courtney was dominant up front with a clear track ahead of him after the lap 11 restart, breaking away to a 1.5 second advantage in the ensuing laps.  Meanwhile, a jostling of position took place just behind with Bacon slipping by Leary for second off turn two on the 14th lap and, moments later, Thomas getting around Leary for the third position.

With less than ten to go, Courtney began to find himself mired in a minefield of traffic.  As the heart rate began to race and the interval began to shrink, the plot thickened.  One false step and the race could be handed over to the surging Bacon.  Courtney took every action and reaction he could to stay afloat, splitting between the lapped cars of Daron Clayton and Mario Clouser entering turn one with six laps remaining to create some sorely-needed separation and buy a little bit of time.

“The lapped cars didn’t want to go a lap down,” Courtney recalled.  “They’re racing and doing their job.  It’s part of it.  You have to get around them and just hope that you get around them at the right time and hope the guy behind you is going to struggle as well.  Tonight, that wasn’t the case.  Once I got around him, he seemed to be right on my butt.”

With four laps to go, Courtney drifted into turn one to split between lappers Isaac Chapple and Jadon Rogers.  As Courtney swung wide, Bacon was glued to the bottom and found the drive to surge ahead to the lead briefly.  Moments later, at the exit of two, Courtney looked like a rock in a slingshot, finding the grip to blast back past Bacon around the outside of the back straight to retake the lead.

Like Rockwell, Courtney felt like somebody, namely Bacon, was watching him and his every move, so he figured he’d better take action sooner rather than later.

“I knew someone had to be close because I wasn’t getting through (turns) one and two very well, but I didn’t know what else to do,” Courtney replayed.  “He showed me a nose there and I thought he was running all the way at the bottom.  So, I went down to the bottom and he drove around me on the outside.  I was kind of like, ‘man, I don’t know what to do here.’  Luckily, we had a yellow there where I could regroup and look at the track a little better.  I knew I was going to have to protect and I knew the (Thomas) was going to race (Bacon) really hard, which, obviously, played in our favor.”

One lap later, the two switched roles entering turn one.  Courtney stuck to the bottom and Bacon swept out wide from the bottom of one to the top of two.  Bacon found the traction on the topside of the exit of turn two to pull ahead entering the third turn, but Courtney slid up in front of Bacon to maintain the top spot just as the yellow flew for an incident involving fifth-place running Justin Grant and Clouser between turns one and two, setting up one final restart for the win.

“Three laps are a lot with the guys we got in the series right now,” Courtney admitted.  “I knew they were going to have to be three perfect ones.”

Courtney got a good jump on the field, but it was Thomas who was the one to watch down the stretch as he put himself right into contention for the victory, shooting past Bacon off turn four with two laps to go, then running down and applying some serious pressure to Courtney.

Courtney admits those final laps following the restart weren’t exactly perfect, but they got the job done, holding off one final attempt by Thomas into turn three on the final go-around to win his ninth race of the year over Thomas, Bacon, Robert Ballou and Dave Darland.

Courtney became only the second driver in the last 15 seasons to have nine USAC National Sprint Car wins before the end of August and the first since Ballou’s nine at this same juncture in 2015.  Ballou eventually tallied up 13 total wins, second-most in a single season behind Tom Bigelow’s record 14 in 1977.

Also, of note, Courtney became the newest series point leader by a single marker over Windom.  Just six points behind the leader in the third position is Thomas in one of the closest point races in the history of the sport.