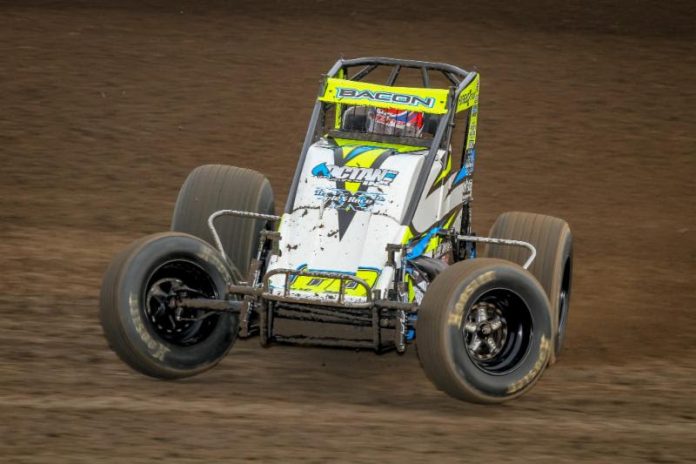 On a Venn Diagram, there’s certainly not many similarities that will appear in the overlapping closed curves when comparing the Terre Haute Action Track and Tri-State Speedway in Haubstadt.

After all, as the naked eye can see, Terre Haute is a large, sweeping half-mile while Tri-State is a quarter-mile paperclip. One takes roughly 20 seconds to get around and one, is, say, about seven or eight seconds shorter.

However, these two celebrated Hoosier-state speedways both require drivers to be on the gas and up on the wheel at all times. And that’ll be the showcase when the USAC AMSOIL National Sprint Cars hit Terre Haute this Friday, Sept. 14, for the “Jim Hurtubise Classic” and Tri-State on Saturday, Sept. 15, for the “Haubstadt Hustler.”

To put those facts into a neatly-wrapped package, those drivers who’ve won at both Terre Haute and Tri-State account for nine of the 12 most recent USAC National Sprint Car champions over the past two decades.

The ones who weren’t champions with the series are some of the most accomplished drivers of their eras. Clayton has run a partial schedule for the better part of a decade and has never chased a title with USAC. Kruseman is an SCRA champ, USAC/CRA champ, Western States Midget champ and two-time Indiana Sprint Week titlist. Stanbrough ranks ninth on the all-time win list alongside Rich Vogler, but never chased a championship during his illustrious career. Stockon is one of the most consistent drivers of the past decade, finishing in the top-five of the standings in five consecutive years. Thomas currently leads the series standings heading into this weekend’s pair of races.

Don’t be surprised to see someone double up this weekend with as versatile as these front runners are, with a tight points race on hand involving the top-three of Thomas, Tyler Courtney and Windom separated by a scant 18 points. However, that versatility also could bode well for a wide swath of drivers to get the job done at either/or with Bacon, Ballou, Clayton, Darland, Stockon, Thomas and Windom, among others all expected to be at the forefront when the checker falls.

Meanwhile, Courtney has yet to win at Tri-State, nor have the likes of Kyle Cummins or Carson Short won at Terre Haute to complete the double-dip. But don’t count them out. As good as the legend, Darland, has been throughout his career, no one was more surprised and elated to win at Tri-State than himself back in July at the last Tri-State visit by the series.

“I just won at Haubstadt,” Darland exclaimed at the time. “It’s unbelievable! I never thought I’d say that.”

As good as this season’s been with the points battle and two young emerging talents winning two of the last three races in Tyler Thomas at Kokomo (Ind.) Speedway in August and Jason McDougal in Pevely, Mo. Back in early September, there’s nothing more that can’t be believed in 2018.

On Friday night at Terre Haute, pit gates open at 3pm, grandstands at 4pm, a FREE pit party will take place from 4 to 6pm, allowing fans to walk through the pits, meet drivers, get autographs, take pictures prior to the on-track action. The drivers meeting will begin at 6pm with cars set to hit the track at 6:30pm (eastern time). Adult grandstand admission tickets are $25, infield admission is $15 and children 11 and under are free.

Saturday night at Tri-State Speedway, pit gates open at 3pm, grandstands at 4pm and on-track activities set to begin at 6pm (central time). Adult tickets are $25, students (age 13-18) are $20, children 12 & under are free.

You can listen to both races LIVE on the USAC app. A day later after each event is run, you can watch complete flag-to-flag coverage on http://www.Loudpedal.TV/.