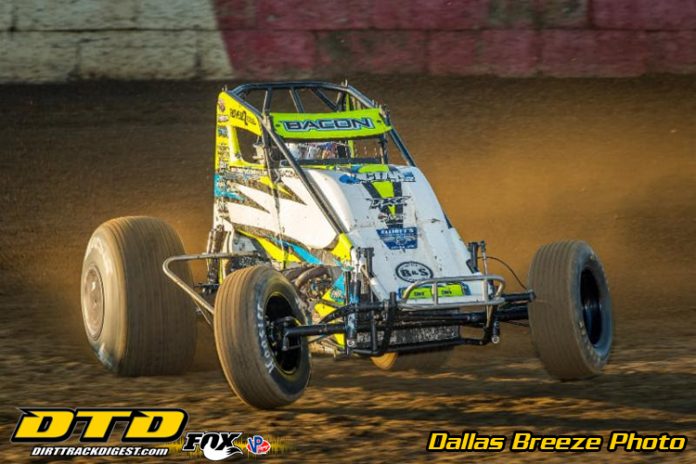 TERRE HAUTE, IN – The Midwest season finale for the USAC AMSOIL National Sprint Cars can be a bittersweet symphony. So much good racing, yet so little time remains to witness it as the clock winds down on 2018.

But, as it is with racing and stick and ball sports, when time runs short in a close battle, the pressure and intensity increase, which rises the crowd to its feet to see who’s up to the challenge and who will succeed.

This Friday, October 12, the USAC AMSOIL National Sprint Car points battle comes to a head at the Hoosier State’s lone half-mile dirt oval, the Terre Haute Action Track, for the “Wabash Clash” with the top-three in the standings separated by a mere 62 markers.

Cullman, Alabama’s Kevin Thomas, Jr. leads the standings by 34 points over Tyler Courtney of Indianapolis, Ind. Thomas has won twice at Terre Haute in his USAC Sprint Car career, first taking the checkered in 2013 and once again in October of 2017. Thomas has scored six wins on the trail this year as he seeks his first USAC National title and the 12th owner title for Dynamics, Inc.

Courtney is the winningest driver in the series this year with 10 victories as he aims to track down Tom Bigelow’s single-season win record of 14, set in 1977 with just six races remaining. Among the ten victories this season are a pair at Terre Haute, back in May and July. With another victory Friday, Courtney would become the first driver since Levi Jones in 2005 to win three USAC National Sprint Car features at Terre Haute in a season.

Windom is third in the standings, 62 back, and in search of becoming the first back-to-back series champ since 2012 and 2013. Terre Haute has been a playground of success for the Canton, Ill. driver over the years. He has four wins in USAC Sprint Car competition at Terre Haute, including twice in 2011, and once each in October of 2016 and in September of 2017.

Behind the race between the top-three is a battle for fourth that involves four drivers separated by just 43 points back to seventh: Brady Bacon, Dave Darland, C.J. Leary and Chase Stockon.

Broken Arrow, Oklahoma’s Bacon may be fourth and out of contention for a third series title, but the 2014 and 2016 USAC National Sprint Car titlist remains a threat to win any race down the stretch. Bacon is the most recent victor at Terre Haute back in September where he led the remaining 25 laps to score his second career victory at the track following his first win there in 2014.

Darland, of Lincoln, Ind., is the all-time leader in terms of USAC National Sprint Car victories with 62, yet only two of those have come at the track where the 1999 series champ made his series debut in 1986. The first of those two victories came in 1993, where he earned his first career series win. It took 21 years for him to follow it up with another score in 2014. He was in contention last October at Terre Haute, recording fast qualifying time, winning his heat and nearly pulling off another win at the famed half-mile.

Leary led the first five laps in September’s round at Terre Haute on his way to a fourth-place finish. Leary’s won once this season at Bloomington (Ind.) Speedway, but the Greenfield, Ind. driver has been on a bit of run lately despite a spill at Indiana’s Lawrenceburg Speedway in September. From the time of the last Terre Haute race leading into Lawrenceburg, Leary had put together finishes of 4th, 2nd, 2nd, 3rd and 2nd. Leary is a past USAC winner at Terre Haute, capturing the “Sumar Classic” Silver Crown race in 2016.

Fort Branch, Indiana’s Stockon is a two-time USAC Sprint Car winner at Terre Haute in 2012 and again in 2016. He won the season-opening race in Ocala, Fla. back in February, but hasn’t found victory lane since. It was near this point last year in which Stockon found his second wind, ripping off a pair of victories to close out his season on a strong note. Along with his current consecutive starts streak that leads all drivers, Stockon has the longest current streak of top-five finishes in the final USAC National Sprint standings, dating to 2013.

Interestingly, the top-eight in the series standing have all won in USAC National competition at Terre Haute, including the hottest driver in the series of late, Justin Grant of Ione, Calif. Grant won the “Sumar Classic” Silver Crown race earlier this April for his first win at Terre Haute. Grant has won two of the last three USAC National Sprint Car features after a 59-race winless drought with victories at Indiana’s Kokomo and Lawrenceburg Speedways to close out the month of September.

The fourth and final appearance of the year for the series at the Terre Haute Action Track begins Friday, October 12, with pits opening at 3pm, grandstands at 4pm and hot laps at 6:30pm.

Tickets can be purchased in advance at https://dirtcar.ticketforce.com/eventperformances.asp?evt=281.

Fans can watch Friday night’s USAC AMSOIL National Sprint Car race live on http://www.SpeedShiftTV.com/ and listen LIVE on the USAC app. As always, you can watch the race one day later, on-demand at http://www.Loudpedal.TV/. Live updates will be available throughout the night on https://www.facebook.com/usacracing/, https://twitter.com/USACNation/ and on the Race Monitor app.