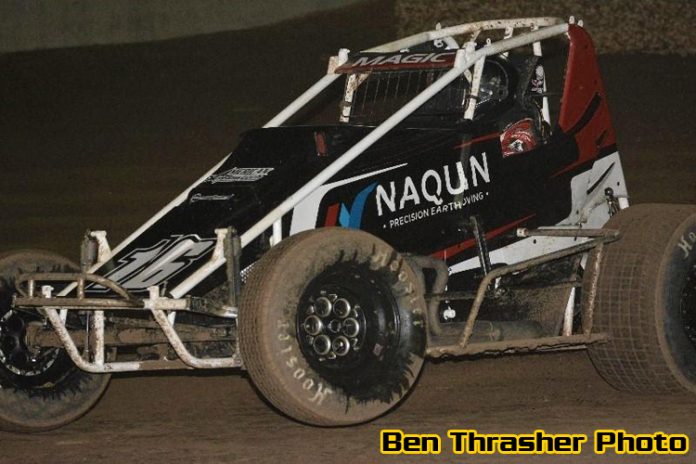 PERRIS, CA – Three-time Oval Nationals winner Bud Kaeding has signed on to drive for Mike Martin Racing in the 23rd annual running of the event on November 8-9-10 at California’s Perris Auto Speedway.

Kaeding, of Campbell, Calif., is a three-time winner of the Oval Nationals, scoring in 2001, 2002 and again in 2007 – one of three drivers to do so along with Dave Darland and Damion Gardner.

A much-accomplished racer on the full USAC AMSOIL National Sprint Car trail throughout the 2000s, Kaeding has been victorious on 17 occasions with the series, most recently in 2012 “Tony Hulman Classic” at the Terre Haute (Ind.) Action Track. Kaeding’s last appearance came in the 2016 Oval Nationals where he finished in the sixth position in Martin’s No. 16.

Kaeding is a five-time champion under the USAC banner. He is a three-time USAC Silver Crown champion, capturing titles in 2006, 2007 and 2009 and has won regional Sprint Car titles with the Western series in 1999 and the West Coast series in 2012.

The Mike Martin Racing car has made three appearances with the USAC AMSOIL National Sprint Cars in 2018, all coming in February at Bubba Raceway Park in Ocala, Fla. Mike Martin, as a driver, won a USAC National/CRA Sprint Car feature at Canyon Speedway Park in Peoria, Ariz. back in 2012.

Advance tickets for all the Budweiser Oval Nationals presented by All Coast Construction, are available 24 hours a day online at https://pas.tix.com/Schedule.aspx?OrgNum=7 or by calling 1-800-595-4849. For fans who do not want to buy advance tickets, there will be plenty available for everyone at the ticket window each race night.